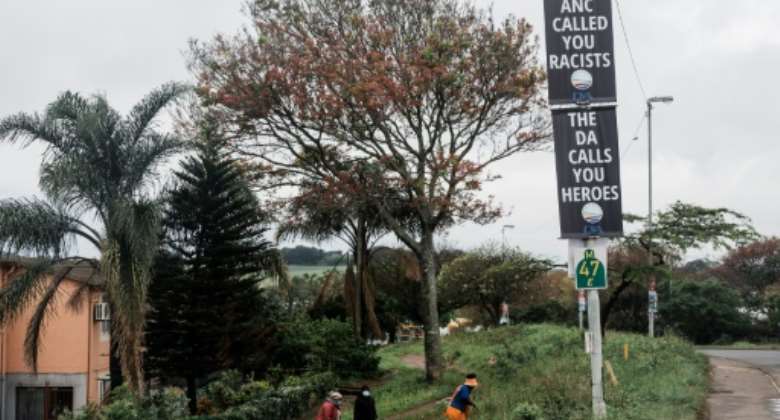 South Africa's largest opposition party has sparked anger after putting up election posters deemed racially inflammatory in a town still reeling from the killings of dozens of mostly black people during July unrest.

Thirty-six people were killed during a wave of rioting and looting largely blamed on South Africans of Indian descent in the southeastern town of Phoenix.

The Democratic Alliance early this week put up posters around Phoenix reading: "The ANC called you racists -- The DA calls you heroes."

The posters have been widely criticised as racially divisive, sparking anger in a country still struggling with its apartheid past.

The ruling ANC party described the posters as "shameful and fascist in nature".

But the DA is unrepentant.

"They are heroes, whether they be black, white Indian or Coloured (because) they stepped up when government stepped away," he said, referring to locals in the area who were protecting property during the unrest.

South Africans go to the polls on November 1 to elect mayors and municipal councillors.

The ANC party, which has ruled South Africa since the end of apartheid in 1994, is fighting to regain its popularity since suffering its worst electoral setback during the last local polls in 2016.

It is now sullied by corruption scandals and riven by factionalism.

But its former leader, Jacob Zuma, whose July jailing for contempt sparked the riots, has made an unexpected call for people to vote for the ANC.

"I have been listening and observing... there are a lot of people who say, because of different reasons, they have taken a decision not to vote," Zuma said, in a recorded video message shared by his foundation on Tuesday.

"I... call on those who intend not to vote, let's all stand up and vote, and vote more especially for the party that brought us freedom, the ANC."

Zuma, who was placed on medical parole last month, was addressing the public for the first time since he left jail.

'We will stand united to oppose e-levy' – Haruna Iddrisu but...
48 minutes ago