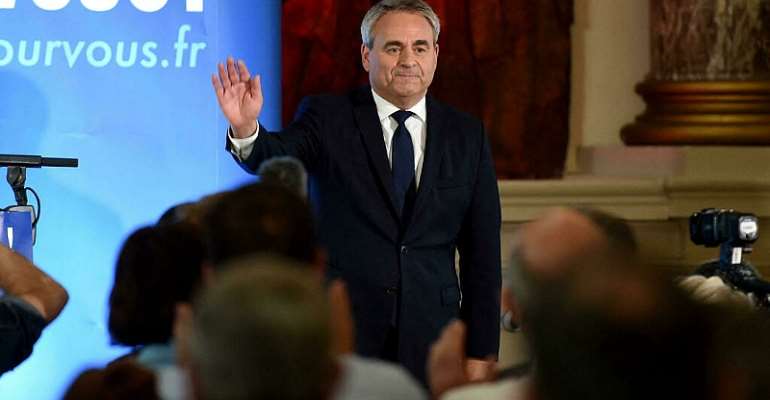 Former president Nicolas Sarkozy invited Wednesday his "faithful friend" Xavier Bertrand to "make himself heard" in the presidential campaign, after a meeting in Calais with the president of the Hauts-de-France region, who is running for the presidency in 2022.

"It's up to him to make himself heard. It doesn't depend on what anyone says," Sarkozy said in response to a question about Bertrand's candidacy, adding: "Jacques Chirac himself helped me a lot."

Sarkozy, who remains an influential figure on the right, has so far refrained from giving any official support to a candidate from the right.

The former president, who recently met with Ile-de-France president Valérie Pécresse  and former European Brexit negotiator Michel Barnier - who are also candidates to lead the right in the presidential election - stressed that he would choosed his camp in the electoral battle "when the time comes".

Sarkozy was in Calais to present Mayor Natacha Bouchart the Legion of Honour.

France's right to decide on how to choose their 2022 candidates

Bertrand was chosen by Sarkozy as his campaign spokesman, alongside Rachida Dati, before he was elected in 2007, but the two men then drifted apart.

Xavier Bertrand was absent from the 2012 presidential campaign that Nicolas Sarkozy lost to François Hollande.

"I have made a journey that is my own, I am proud. Xavier can lead his ambition, I can perfectly understand him. I am not a bitter person who thinks that after him there is nothing left," Sarkozy added.

In addition to Pécresse, Barnier and Bertrand, Eric Ciotti and Philippe Juvin - both from Les Républicains - have thrown their hats in the ring to represent the right in next years presidential elections.

The LR activists must decide next Saturday how they will designate their candidate. Two methods are available to them: the primary, in which Xavier Bertrand refuses to participate, or a member's congress, the details of which have not yet been decided.