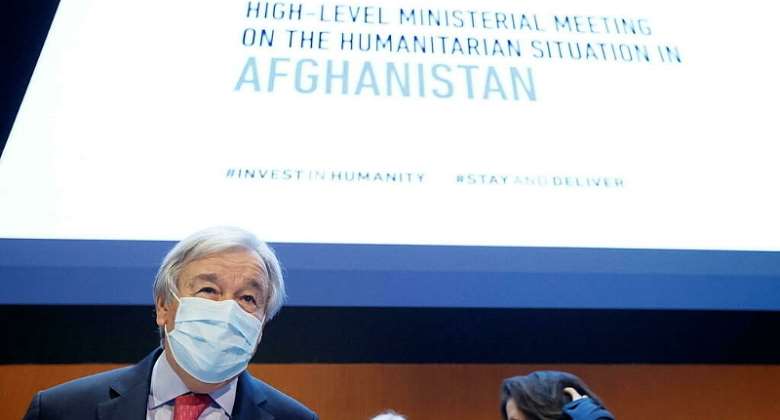 "Half of the (Afghan) population is now at risk, including more than four million women and around 10 million children. It is our responsibility to be at their side in this new ordeal," Le Drian told a high-level ministerial meeting in Geneva on Monday.

France promised "100 million euros (118 million dollars) to tackle this emergency," he said, referring to the situation in Afghanistan following the withdrawal of US troops.

The meeting, hosted by UN chief Antonio Guterres, came just under a month after the Taliban swept into power, sparking a chaotic exit for the United States and its allies after 20 years in the country.

The half-day conference was seeking to raise over 600 million dollars which humanitarian agencies say is urgently needed to provide life-saving aid to millions of Afghans.

Guterres urged the international community to engage with the Taliban and to provide a "lifeline" of desperately needed aid to Afghans, as the first foreign commercial flight left Kabul -- a hopeful sign for those trying to leave the country.

In all, UN humanitarian chief Martin Griffiths said donor countries pledged a total of 1.2 billion dollars in aid, but did not say how much had been earmarked for the UN's flash appeal for 600 million dollars to fund emergency assistance for the rest of this year.

Winter on the way
The flash appeal was launched amid fears that malnutrition is looming for many, and perhaps even starvation, with mass displacement in the country and winter fast approaching.

Guterres said he believed aid could be used as leverage with the Islamist extremists to exact improvements on human rights, amid fears of a return to the brutal rule that characterised the first Taliban regime from 1996 to 2001.

"It is impossible to provide humanitarian assistance inside Afghanistan without engaging with the de facto authorities," the UN secretary-general told ministers attending the Geneva talks.

"It is very important to engage with the Taliban at the present moment."

Guterres urged nations to "find ways to allow for an injection of cash in the Afghan economy" in order to avert an outright collapse that would have "devastating consequences" for Afghanistan and the wider region.

"I don't think that if the de facto authorities of a country misbehave, the solution is to do a collective punishment to their people," he said.

The Taliban have promised a milder form of rule this time around, but have moved swiftly to crush dissent, including firing in the air to disperse recent protests by women calling for the right to education and work.

UN rights chief Michelle Bachelet said she was "dismayed by the lack of inclusivity of the so-called caretaker cabinet, which includes no women and few non-Pashtuns".

She added there was "well-founded" information showing the Taliban had gone against their commitment to a more moderate brand of government, pointing in particular to "credible allegations of reprisal killings" of former Afghan security forces.

Flights resume gradually
Meanwhile, the departure of the first international commercial flight since the Taliban takeover offered Afghans still wanting to flee a glimmer of hope.

A Pakistan International Airlines jet landed in Kabul Monday before making a return flight to Islamabad with about 70 people on board -- mostly Afghans who were relatives of staffers with international organisations, according to airport ground staff.

Kabul's international airport was trashed after US-led forces finished a chaotic evacuation of more than 120,000 people, and the Taliban have since scrambled to resume operations with technical assistance from Qatar and other nations.

But the resumption of commercial flights will be a key test for the Taliban, who have repeatedly promised to allow Afghans with the right documents to leave the country freely.

Ghana has had lawyers as president, a communication expert; ...
7 minutes ago