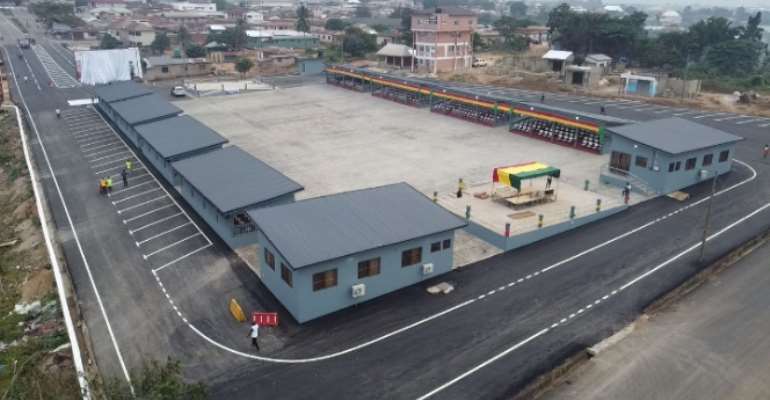 The Middle Belt Development Authority has constructed a magnificent public square at Juaben in the Ashanti Region, becoming the biggest in the country.

According to the CEO, the newly constructed public square, which is named after the late Professor Adu Boahen, will help the people of Juaben and its catchment areas.

The square can be used for funeral ceremonies, wedding, community meetings and any other public events. The project is under the 1 Constituency 1 Million Dollar initiative by the Government of Ghana.

The President of the Republic of Ghana graced the commissioning of the project at Juaben.

Speaking to the media during the commissioning, the CEO of the Authority Mr Joe Danquah heaped praises on the president.

"As we are all witnessing such a beautiful project, we have to thank H. E. Nana Addo Dankwa Akufo-Addo.

"I will hereby, call on various stakeholders, thus the Traditional Council, the District Assembly and the General Public to make good use of this facility. Middle Belt Development Authority will ensure that there is proper maintenance of the project," he stated.

The Juaben Public Square's contract was awarded to Earth Masters Company Ltd. Facilities in the project include a conference Hall, VVIP, 8 different pavilions, or stands with big sizes, a resting facility, a special place for Traditional leaders, a well-designed place for important dignitaries and a spacious environment.

The occasion was chaired by the paramount Chief of Juaben Traditional Council, Daasebre Otuo Serebour 11 and the chairman of Council of State.

The paramount chief expressed his excitement on the project and commended Joe Danquah, MBDA and the president of Ghana.

Some of the dignitaries present were Mr Charles Adu Boahen, the son of the late Professor Adu Boahen, Minister of State at the Finance Ministry, Hon. Ama Pomaa Boateng MP for Juaben and Deputy minister of communication and Digitisation, CEO for Middle Belt Development Authority, Joe Danquah and his team.