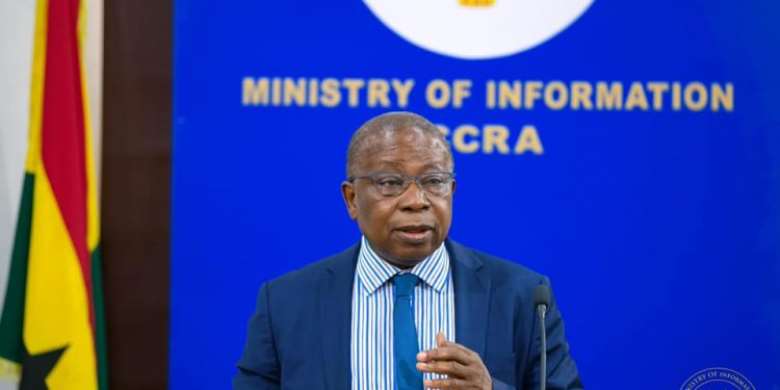 Pressure has been piling on the Health Minister, Kwaku Agyeman-Manu, to resign over the botched Sputnik V vaccine procurement deal.

This comes after an ad-hoc parliamentary committee tasked to probe the deal recommended that efforts should be made to retrieve over GHS16 million expended as part of the deal.

The Minority in Parliament for instance has threatened to pass a vote of censure on the Minister of Health, Kwaku Agyeman Manu.

Other Ghanaians have also added their voices to calls for the dismissal of the Minister.

These calls increased after the committee in its report noted that correspondence at their instance from the Bank of Ghana stated that:

A number of Ghanaians have also raised concerns over the committee’s recommendation, for failing to propose the removal of the Health Minister from office.

With the hashtag, #AgyemanManuMustGo trending on Twitter, several Ghanaians are calling for the resignation or sacking of the minister.

The Minority in Parliament has expressed support for this move as on the day of presenting the report in Parliament, Minority Chief Whip Mubarak Muntaka argued extensively on the need for the report to be amended for a recommendation on the sacking of Agyeman-Manu to be included.

During one of his appearances before the ad-hoc committee, Mr. Agyeman-Manu defended his actions, arguing that he acted in such a manner due to the emergency nature of the situation and the need for vaccines to inoculate the Ghanaian populace. He is reported to have explained to the committee that:

But critics of his approach maintain his explanations are untenable.

A news report on the official website of the Russian Direct Investment Fund, official sellers of the vaccine, disclosed that the Ministry of Health gave emergency approval for the use of the vaccine in Ghana as far back as February 2021.

It is their view that the government of Ghana cannot after a month claim of failure to directly access the RDIF, a body it worked with, to certify the use of the vaccine in its jurisdiction.

Based on these and a number of considerations, the Minority in Parliament expressed its commitment to remain resolute in other to see Mr. Agyeman-Manu out of office.

The Second Deputy Speaker of Parliament last Friday deferred the matter on the dismissal of the Minister, but the Minority maintains it will be forced to pass a vote of censure on Agyeman-Manu if the President fails to dismiss him.

“I hope that tomorrow we do not wake up and be told that the government of Ghana has been sued in arbitration; the consequence will be another judgement debt. That will be someone contributing to financial loss to the state. So we expect President Akufo-Addo to do what is expected by sanctioning the Minister or the Minister doing what is honourable in this respect”, Minority Leader, Haruna Iddrisu said.

The committee in its report concluded that the Minister dealt with middlemen in attempts to procure the Sputnik V vaccines. On page 23 of its report it stated that;

“The Committee found that the Ministry dealt with the Private Office of His Highness Al Maktoum and S. L. Global. The two entities were appointed by the Aurugulf Health Investment (Abu Dhabi, United Arab Emirates), to be both Agents and Distributors of the Sputnik-V COVID-19 Vaccines in Ghana. Clearly using middlemen for the purchase and distribution of the vaccine.”

The Minister while appearing before the ad-hoc committee noted that steps were taken to ascertain whether the distributors were mandated by the manufacturer.

He stated to the committee that their websites did not reveal them as middlemen. He is reported on page 13 to have denied “that the Ministry dealt with a middleman. He said the Ministry dealt with Messrs Al Maktoum as distributors of the manufacturer's product, the Vaccine, and that the term “middleman” was not found on the website of Messrs Al Maktoum.”

But critics argue that the numerous undertaken done by the ministry is troubling and Agyeman-Manu’s claims of working in the interest of the country are questionable.

Some cited why the Minister decided to write to the Russian Ministry only after the contract was signed.

Others have also questioned the extent to which Ghana's missions in Russia were involved in the bilateral engagements.

The committee in its report noted that the minister revealed that the decision to buy the vaccines at US$19 per dose instead of the factory price of 10 dollars per dose was after the distributor pulled out following negotiations from a starting price of $28 per price.

But social media continues to be alarmed by the cost of the vaccines.

The committee also found out that the minister did not seek prior parliamentary approval.

“On whether the Ministry obtained Executive approval before signing the Al Maktoum Procurement Agreement. He, however, explained that he took the ministerial decision after the Emergency Operating Centre under the Ministry had deliberated on the matter and the Ministry's Entity Tender Committee had been informed about it,” the [arliamentary report added.

For a number of Ghanaians, this action by the minister is enough for certain actions to be taken against him.

Private legal practitioner, Sammani Zachery says, although he expects the money expended retrieved, the issue of dismissal or resignation lies with the appointing authority.

“In that case, I do not only expect them, only to return but also for damages to be recovered which will be accrued by the state. The issue of someone should resign or be sacked is an issue of a political and personal matter for the appointing authority to decide. It is also a personal decision for the Minister to resign. So these are not issues that anyone else can determine. Absolutely, if the prosecuting authority, that is the Attorney General determines that the conduct of the Minister has caused financial loss to the state, then obviously it should be an issue of criminal charges.”