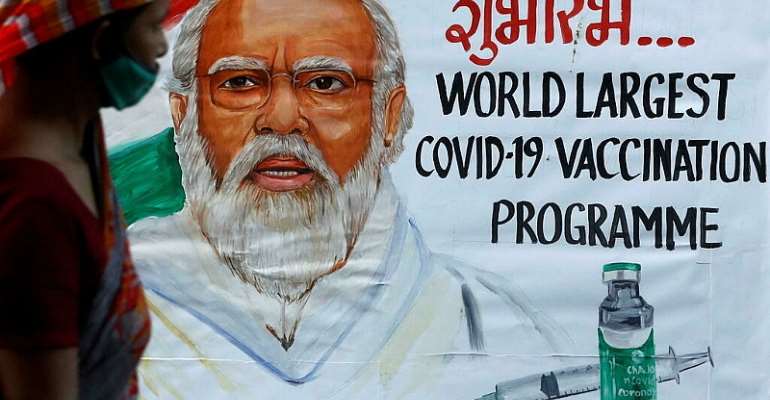 Difficulties in the production and distribution of vaccines continue to hamper India's efforts to vaccinate its entire adult population by the end of this year. To date, the total number of those fully inoculated represents just under 8 percent of the country's 1.3 billion population.

More than 489 million Indians have received one jab, 101 million have had both shots. The country is still far short of stated targets.

From available data, mathematical modelers maintain that the country needs to accelerate its vaccination drive at least six-fold to achieve its target of immunising its entire adult population of 940 million by the end of 2021.

That target seems unlikely to be reached, given that India's immunisation drive, which began slowly on 16 January, has been marked by a shortage of vaccines, and a bitter tussle between individual states and the federal government.

This week, the Delhi High Court said the country was lagging behind, and the target set to vaccinate the entire adult population by 31 December was unrealistic.

"God knows whether we will achieve our target of 31 December that we have set. Looks like we will not,” said the court.

“Just yesterday, it was in the press that we need to vaccinate 9 million people a day to be able to achieve that. How will we achieve that? We don't have that kind of infrastructure. Let's face it.”

Yet, the government seems confident of meeting its target, despite major supply and distribution difficulties.

Health minister Bharati Pravin Pawar told parliament that 1.35 billion vaccines would be made available across the country between August and December, and advance payments had been made to manufacturers.

Boost in vaccine supply to have major impact

N K Arora, who heads the National Expert Group on Vaccine Administration, expressed confidence that the government would be able to meet its target, based on the boost in vaccine supply expected over the coming months.

"There has been a gradual increase in the availability of vaccines," Arora told news channel NDTV, adding that the country needed to add 75 to 100,000 immunisation centers to meet its deadline.

Since the government's new vaccination policy came into effect on 21 June, with a shift to centralised procurement of vaccines after several states faced difficulties, the pace of immunisation has picked up.

In June, India administered 118 million doses. That figure was up to 124 million doses by the end of July, and the country has been inoculating 4 million people every day, according to government data.

“India's vaccine production capacity is not rising as is regularly claimed by the government. Secondly, its projections for vaccine availability are consistently inflated and unrealistic,” said R Ramakumar, professor at the Tata Institute of Social Sciences in Mumbai.

Vaccine shortage was always predictable and it was amply clear for some time that the two manufacturers, Serum Institute of India which produces 'Covishield' and Hyderbad-based Bharat Biotech, producing 'Covaxin' were not going to be able to quickly meet the demand.

Experts say Bharat Biotech, which is expected to produce 550 million doses over five months, has committed only 80 million doses. Its additional plants may take at least six months before they can supply doses.

The Russian vaccine, 'Sputnik' has not opened up for everyone yet though the government says it plans to produce more than 300 million doses a year. The government is yet to spell out when that target might be achieved.

Indian pharma company Zydus Cadila has developed India's second home-produced vaccine, and has reportedly submitted additional data related to immunogenicity and safety of the vaccine to the Drugs Controller General of India. The company is awaiting approval for its treatment.

Supplies of foreign-made vaccines such as Moderna and Pfizer are still facing legal hurdles over the manufacturers' desire for indemnity protection.

“The only way to make good on the claims of achieving full vaccination coverage by end of this year will be by increasing the speed of vaccination with simultaneous focus on increasing and maintaining a continuous supply of doses,” said vaccine expert, Rakesh Ranjan Kumar from Jawaharlal Nehru University.

With a third wave predicted for India any time between August and December, vaccine protection remains the only way forward against severe infections and hospitalisations. Those most at risk are still the unvaccinated.