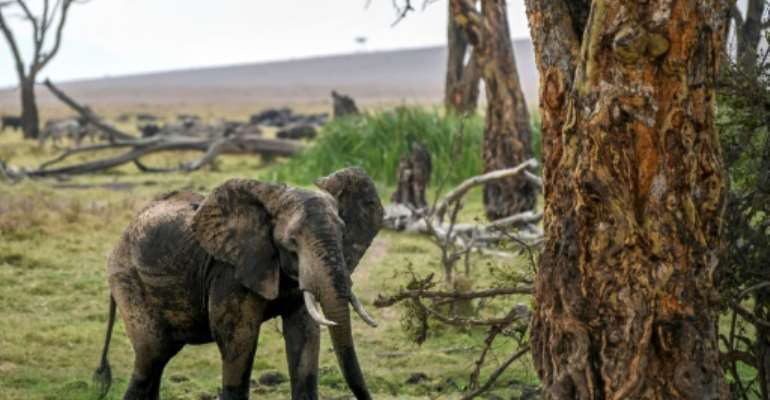 The numbers of African savanna elephants have plunged by at least 60 percent during the last half-century, according to the International Union for Conservation of Nature. By Tony KARUMBA (AFP)

The flimsy planes tethered to metal drums to prevent them from accidentally becoming airborne are unlikely weapons in Kenya's fight to protect threatened species as it conducts its first national wildlife census.

Decades of unbridled poaching, expanding human settlements and climate change have taken a heavy toll on the global wildlife population -- and central Kenya is no exception.

African savanna elephants have been particularly hard-hit, with their numbers plunging by at least 60 percent during the last half-century, according to the International Union for Conservation of Nature (IUCN).

So the pilots preparing their aircraft at the tiny airport at Isiolo know they are on the frontlines of a battle with far-reaching consequences.

The Kenya Wildlife Service conducts an aerial wildlife count near the town of Isiolo. By Tony KARUMBA (AFP)

"Elephants are the key animals, but when you are able to locate (any) endangered species, you feel like the census is on the right track," pilot Chris Cheruiyot tells AFP as he fastens the safety belt of his passenger, Julius Kabete.

A camera and audio recorder dangling from his neck, Kabete will spend the next few hours counting Somali giraffes, Grevy's zebras, oryxes and other animals as the pair cruise the windy skies and refuel their two-seater Aviat Husky aircraft at specially set up stations in the forest.

A female black rhino known as Sonia is pictured with her calf in the Lewa Wildlife Conservancy in Kenya. By Tony KARUMBA (AFP)

The ambitious exercise, which kicked off in May, covers major species in more than 50 of Kenya's national parks and reserves as well as private and community conservancies, and includes marine life.

Much of the existing data on the country's wildlife population are gathered individually by local advocacy groups or international conservationists, contributing to a scattershot approach to animal protection.

Furthermore, training spotters is often both time-consuming and expensive.

The result is that many scientists prefer to use models to map wildlife instead of tracking animals in the flesh, says zoologist Iain Douglas-Hamilton of Save the Elephants.

"They publish modelled results (rather) than raw data," he told AFP.

That makes this maiden census especially important. Its information will help the East African nation map a long-term strategy to save a cherished asset that is also a major tourist draw.

But numbers tell only half the story. For the rest, the spotters need to track the animals' habits -- where they eat, drink and rest.

At a hotel in Isiolo, a team listens to audio files chronicling a day's work.

The preliminary data are already "very worrying," says Fred Omengo, a scientist with the Kenya Wildlife Service (KWS), explaining that many of the animals were spotted around watering holes close to people's homes, a sign of extensive human encroachment into wildlife territory.

"The little (food) that is available is basically a competition between domestic and wild animals," he tells AFP.

"In most cases, domestic animals will have an upper hand."

And, as humans attempt to fence out wildlife, both are paying a deadly price.

Nearly 500 people were mauled or crushed to death by wild animals between 2014 and 2017, the KWS said in a report published in December 2019. More recent figures were not available.

And the threat to humanity and to wildlife is only set to intensify, conservationists warn.

"All wildlife routes have been closed by humans and now elephants want water, know where it is but can't get there. This is a worry," Robert Obrein of KWS says.

"We have encroached into areas we have never been (in) before, and the numbers are growing. That means in another 10 years, we might not be having wildlife outside protected areas."

It is a fear not lost on the census takers, whose patient, painstaking efforts are often cut short by poor weather.

As sharp gusts sent clouds of dust flying into the atmosphere, diminishing visibility to less than half a kilometre (a quarter of a mile), the three pilots circled back for home after a four-hour mission, accepting defeat for now.

The aircraft are "inherently unstable" and too light to tackle high winds, explained Kennedy Shamala.

"You are flying below 500 feet (150 metres) above ground level, so you have minimum altitude to play with," the soft-spoken pilot told AFP.

"You are working throughout, both your legs and hands and observing."