What If They are Metaphors? 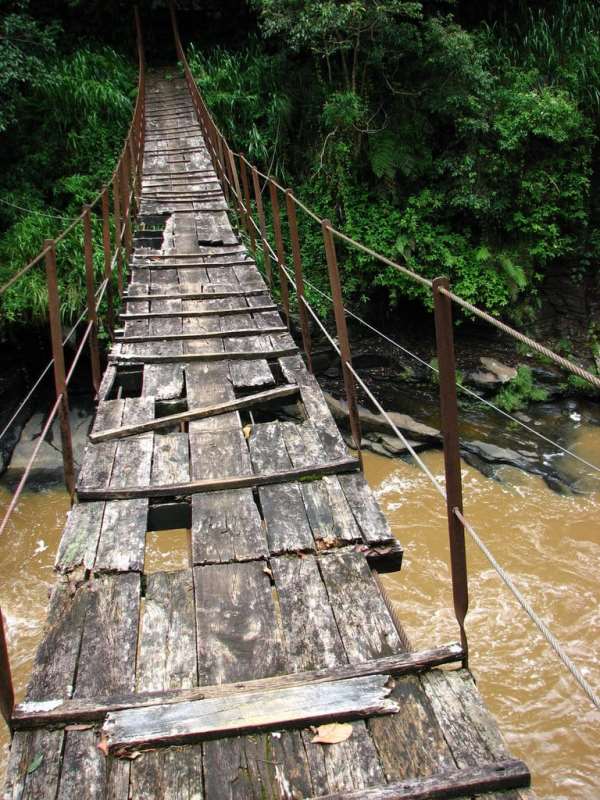 I put my feet on the plank and knew that what we were to walk on was a death trap and no bridge at all. Everyone about me was afraid to get onto the plank but had no choice but to get on anyway for there was but one other way to the next town where we all wanted to get to, but only those with vehicles could reach that town. However, the journey there by vehicle was very long and it cost everything one had to get a taxi ride there. What choice had we those who were poor and could not afford the ride?

Tentatively, I took another shaking step more firmly onto the plank. My mother was behind me. “Hey you, get on with it, we don’t have all day to wait for you” someone barked behind us. I needed to take another step but I couldn’t. My feet were glued fast to their place on the plank. Involuntarily, my eyes looked in between the worn-out planks to the mass underneath the deadly bridge and saw rushing brownish substance composed of all manner of filth, debris, carcasses of god-knows what animal. The fluid cannot be called water because it was a composition of so many things at the same time: a landslide, a quicksand and a mudflow.

How we could possibly be made to walk over such a thing was beyond my ken, but walk over it, we must. I swallowed hard and took another step, with my mother right behind me struggling as I was. The rage of the people waiting in line after us was building to eruptive points and the more time I wasted would be risking being sent flying overboard into the abyss. I took a step after another and sensed my mother right behind me doing same.

When I painstakingly reached the middle of this death trap, I noticed to my utter stupefaction and doubt as to the health of my eyes that they were some men and women, well dressed, who were almost knee-deep in this landslide but could keep their balance and remain in the same place as the mudflow took others screaming away. I saw some meters from where I was rooted, dumbfounded at the spectacle, a man weeping over something he had just lost to the mudflow. One of the men in the mudflow picked up what looked like a ticket and waved it at the owner. What utter joy replaced the sadness in that split second! The man in the mudflow who had retrieved the lost item bellowed to him who was on the bridge, “you may have back your ticket but at a cost.” He smiled a winning smile. He held out the ticket, and once again for the life of me, I knew not what was happening but there was a quick exchange between them and the man took back his ticket and triumphantly walked on while the man in the mudflow sneered and looked like he had won the best bet. Something was amiss in these scenes before my eyes.

One thing I could hardly believe was that though there was an unnatural thing happening, I was part of everything. I felt too keenly, what was going on around me to believe that it was but a dream. I had an inkling and a foreboding that what laid ahead for the man who had just retrieved his ticket was doom. I was shaken already to boots by the frightening walk on this bridge and another spectacle of the foregone nature may reduce me to a heap. Mustering up courage, I went forward.

“What the heck was wrong with this whole place and scene?” I screamed inwardly. I was exasperated beyond relief and this was because just a little way off in front of me, where the bridge suddenly ended and a semblance of sanity was in view, there were two men blocking off the road by extending what looked like a wooden board across the bridge to some people on the other side so that they actually could skip some of the long walk on the rickety bridge from where I had started the journey. My rage was not that these other people found a shortcut – far from it- but because monies exchanged hands for the shortcut-help across the bridge.

Just when the seething rage boiling up inside of me for such unfairness threatened to blow off the top of my head, I was snapped awake by a chilling breeze. “Phew, that was just a dream,” I murmured to myself as I saw that I was safely in my room and not on any bridge. The chill of the dream however remained and I shuddered to think of what was in that dream.

I was still shaken and baffled by the dream, I asked myself, “is this a metaphor for corruption in our society or a metaphor for a religious journey?” or it is for both? Is the planked bridge the trials, hardships, uncertainties, doubts, tests, and temptations people go through or policies and systems of governance? What of the long but expensive road that seemingly gets to the same destination? Is that futility or sugarcoated and veiled forms of corruption? Then again, what was the mudflow or landslide_ visible or covert forms of corruption both physical and spiritual?

Oh, what conglomeration of metaphors!

MMDCE appointments shouldn't be seen as job for the boys' - ...
37 minutes ago