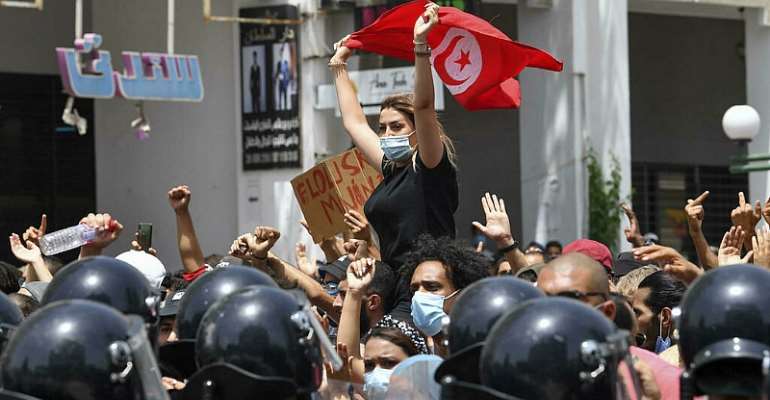 After a series of demonstrations across the country, Tunisian President Kais Saied announced on Sunday evening that he was suspending the work of Parliament and dismissing the head of government, Hichem Mechichi, from office.

Although Tunisia is under curfew, a number of people took to the streets on Sunday night after the announcement  and others honked car horns, either to celebrate or criticise the president's move, according to RFI's correspondent in Tunis, Lilia Blaise.

On Monday morning, parliament leader Rached Ghannouchi tried to access the parliament building but was prevented from entering by the military.

Protests by rival political parties are ongoing in front of the building.

Saied  has met with military and police representatives in Carthage palace. He has also announced that he will appoint a successor to head  the government which would, in turn, will appoint a ministerial team in the coming days.

“We are going to announce other measures to save Tunisia. The Tunisian people must continue their revolution in all legitimacy and we will apply the law,” he said after the meeting.

"We are going through very delicate moments in the history of Tunisia," he added.

In a statement posted to social media he argued that his action is not a suspension of the constitution, nor an exit from constitutional legitimacy.

He claimed that he was relying on Article 80 of Tunisia's constitution to take exceptional measures if there is an imminent threat to the country.

President's moves not entirely clear
However, the constitution does not mention anything about dismissing the head of government, lifting the immunity of deputies, or even freezing parliament for one month, actions that he has already taken.

Violence and disappointment as Tunisia marks tenth anniversary of revolution

The moves are the result of growing friction between Saied and the main parliamentary party, Ennahdha, as these measures target them directly.

Parliament leader Rached Ghanouchi is the leader of the party and Hichem Mechichi, the now ex-prime minister, was supported by this movement close to the Muslim Brotherhood.

Ennahdha is an Islamist party that has been in power since the 2011 revolution.

The party called Saied's move “a coup d'état against the revolution and against the Constitution” in a statement on social media, stressing that his "partisans… as well as the Tunisian people, will defend the revolution".

For many Tunisians, it is unclear as to whether they are witnessing a coup d'etat or a new breath of fresh air in the face of the political deadlock that had lasted for months.