Nudity and near nudity in the Olympic Games 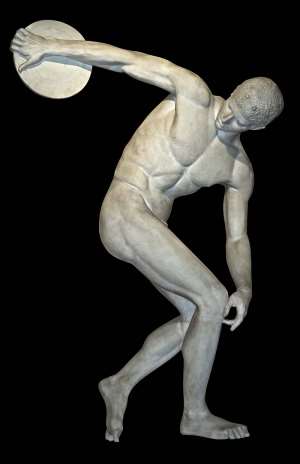 They all competed naked during the first Olympics. The history as to how and when nudity became the norm in the ancient Olympics is not very clear. But it started early, perhaps from the second Olympiad. The first games are believed to have been held in 776 BCE (Before our Common Era).

There is enough evidence to show that the athletes competed naked. There are extant vases, paintings, and sculptures depicting the competitors running, throwing, wrestling and boxing stark naked. The Athenian Historian and General, Thucydides (c. 460 – c. 400 BCE), in his historical accounts made reference to the Spartans as being the first to wrestle naked because they thought it gave them an advantage when the opponent had nothing to tug into and use to bring them down. Loincloths were the norm before this and they only covered the private parts. The athletes in the ancient games gathered together at the games centre to train for a month before the real competition. They trained naked too.

The ancient Greeks believed competing naked distinguished and placed them above the “barbarian” hordes – the Persians, Romans, etc. For the ancient Greeks, the games were not just a matter of seeing who was best in what event. They were sacred and in honour of the gods. The winners dedicated their victories to Zeus whose frightful image adorned the games grounds.

Because the competitors were all male and competed naked, only young unmarried girls were allowed to the games as spectators. Married women were banned upon pain of death. Unmarried girls competed in a separate event that was part of the festival in honour of Hera, the Queen of Heaven. They competed only in a running event dressed in short tunics that covered their shoulders but left one breast exposed.

Today, the quintessential Olympic visual symbol is the discus thrower. He is shown with a twisted body as he makes the turn to gather enough energy to throw as far as possible. This figure is always shown naked! Olympic iconography is made up essentially of naked figures.

The ancient games ended in 394 CE (lasting for some 1200 years). For the next 1500 years there were no games. The next games would not be held until 1896. Pierre de Coubertin, a French aristocrat, founded the International Olympic Committee in 1894. He is regarded as the father of the modern Olympics. The first modern Olympics were held in 1896 in Athens. Fashions and morals had changed over the centuries. Nobody was going to be allowed to compete in the nude.

1898 belonged to the Victorian era famous for its prudishness. Fashion reflected the modesty of the period, especially for women. They hid their bodies behind long dresses. They wore knickers and it was considered indecent to show even a little piece of your bare leg. They also wore corsets that pushed their breasts in place. You could see the shape but decent females did not display any tantalising cleavages.

Athletes also wore clothing that suited the times. We have all seen pictures of the shorts worn by footballers in the 20s, 30s and even 40s. Female tennis players appeared in long skirts.

There has been a gradual turnaround to the nudity of the ancient games. This year’s Olympics will be played to empty stadia due to the Covid crises. It will not only be the stadiums that will look bare. Many of the athletes will be barely dressed during the competitions.

These days, all athletes wear very scanty clothing. This is seen mostly with the female athletes who no longer wear shorts and blouses. They wear bikinis – the tinier the better. Female Olympic athletes have now become very popular especially with the male section of the viewing public.

Figure skating in the winter Olympics has become popular and not only because of the aesthetic nature of the sport. The young girls are scantily dressed and make moves in which they raise their legs wide open as they slide on the ice. The camera has to find an angle that, for decency, does not zoom in too much on certain body parts.

Tight dresses are also common in the swimming events. The female springboard divers and synchronised swimmers appear in one-piece swimsuits. And, oh, the female volleyball players look so pretty. They are often tall, slim and shapely girls in tight fitting panties. When they make the dip to the floor to retrieve a difficult ball, even the camera itself shyly turns away its head! The female beach ball players appear in summer beachside wear. It was once suggested that female soccer could become more popular with male viewers if the players wore dresses like female volleyball players. But FiFA is having none of that.

To be sure, even the males are also using tight dresses. This is not only for aesthetic reasons but also for aerodynamic effect. Well, female spectators will not be denied the satisfaction of their voyeuristic instincts. There are some fine, well-trained, young male bodies to look at.

All these well-shaped bodies are brought to television viewers by powerful cameras. You don’t have to go to the stadium to see this. You may even get a better view from your sitting room.

But these scanty dresses have been a great source of worry for, especially, Islamic countries where religious convention forbids women from showing a lot of skin to outsiders. This religious requirement has held back the participation of Muslim women in the Olympics. It has also delayed the growth of female football in these countries.

In Africa, Kenya’s very successful female long distance runners refused for a long time to wear those tight fitting panties. But now many of them do. These female athletes are often slim and do not have those huge buttocks that African men seem to like so much in their women. Perhaps tight fitting panties would seem more appropriate to such slim bodies. But nudity and near nudity are still frowned upon in many traditional African societies.

When the African female athletes line up at the starting blocks in Tokyo, many of them will be scantily dressed. Even the ones with the natural big black buttocks will truss them into skimpy dresses. It is obvious many of them are aware of the influence they have on male spectators and intentionally enhance the effect. It pays!

What will the future be in terms of the dressing of athletes? Will there be a complete return to the nudity of the ancient games? Are we going to see the girls running with one of their bare breasts dangling in the air? I don’t think this is likely. But there will not be a return to the early days of the modern games.

Well, I am not going to miss the finals of the female 100 metres “dash”. I hope the television producers will show us the start from behind as the girls lift their buttocks from the starting blocks.