Lagos-Ibadan Rail Line: Amaechi is a personification of service - Eze

......Congratulate Nigerians, Hails Buhari for His Faith on Transportation Minister
By Nwaorgu Faustinus 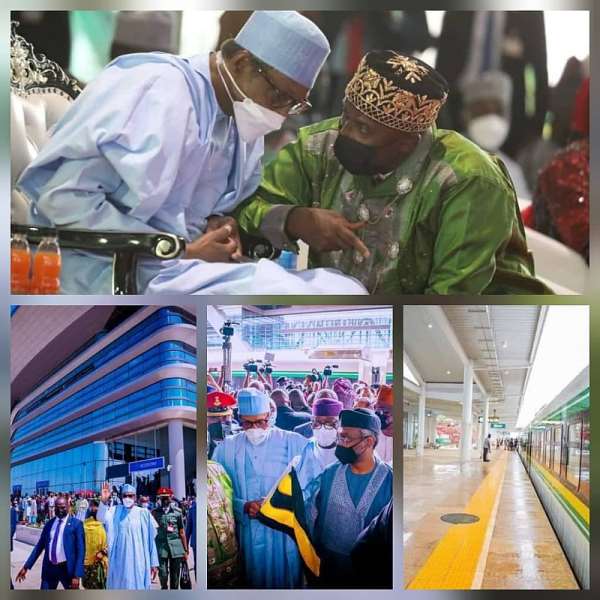 Erstwhile National Publicity Secretary of the defunct New People’s Democratic Party (nPDP) and Chieftain of the ruling All Progressives Congress, Chief Eze Chukwuemeka Eze, has joined the lengthy roll of Nigerians and Nigerians in the diaspora, aliens and diplomats alike, who have felicitated with the President Mohammadu Buhari/APC-led Federal Government for the giant strides it has continued to record in critical areas of governance especially, the revival of the nation’s moribund rail infrastructure, covering a country mile and traversing the nook and cranny of the Nigerian territory and choreography.

In a statement made available to media houses in Port Harcourt, Eze said the efforts of the Transportation Minister, Rt. Hon. Chibuike Amaechi, in driving the Buhari administration’s policy on infrastructural development is selfless, worth commending and cannot be overemphasized.

He said Amaechi’s display of rare dexterity in public administration has continued to break new grounds and discover and open up opportunities for Nigerians to sustain their livelihoods in the face of the harsh economic realities of the times, and called on those on whom the responsibility of leadership is saddled especially, in the public sector, to brace up and take a clue from the Minister.

The party Chief said aside priding itself as the first double-track standard gauge rail in West Africa, the 156km Lagos-Ibadan rail project is renowned for its peculiar status as the first Nigerian railway line to be started and completed by the same administration, since 1960.

With a holding capacity of over 6,000 passengers, Eze said the Ebute Metta Station, known as the Mobolaji Johnson railway Station, is the largest in the West African region.

Describing the feat as another milestone in the drive of his administration to revitalize the railway system and establish it as a choice mode of transportation for both passengers and freight, Buhari pledged his administration’s commitment in ensuring that priority is given to modern railway system as a transportation backbone that can transform industrial and economic activity in the country.

Reeling out the benefits of the Lagos-Ibadan corridor as well as other on-going railway projects across the country, President Buhari said the project establishes what he described as an end-to-end logistic supply chain in railway transport within its short corridor, Lagos – Ibadan, as goods to the hinterland would now be transported by rail directly from the Apapa port Quayside straight to the Inland Container Depot located in Ibadan from where it can be distributed to other parts of the country.

Lamenting the challenges posed to the nation’s economic growth by absence of strong and effective infrastructure, the President said in addition to other other ongoing railway projects, his administration has embarked on the completion of the outstanding segment of the Lagos – Kano railway, which is Ibadan – Kano.

He emphasized that the Lagos – Kano railway project when completed will link the Kano – Maradi line at Kano and a rail link from the Nigeria southern ports of Lagos to Maradi in Niger Republic will be achieved.

The project, Buhari said, would be beneficial to the economy through employment from new business opportunities and wealth creation.

Expressing delight that his directive to the Federal Ministry of Transportation and Ministry of Finance on reaching financial agreements with appropriate co-financiers to partner with the Federal Government for the development of the Ibadan – Kano railway was yielding results, President Buhari noted that Ibadan-Kano project would have a connection to the Tin Can Island port as well as the West – East Coastal rail line from Lagos to Calabar linking Onitsha, Benin, Warri, Yenagoa, Port Harcourt, Aba and Uyo.

‘‘From the beginning of this administration, railway infrastructure development has been given the priority it deserves and various milestones have been reached, right from when the Abuja – Kaduna railway was flagged-off for commercial operation in 2016 to this Lagos – Ibadan railway project being commissioned today for full commercial operation,’’ he said.

Commending the Minister of Transportation, Rotimi Amaechi, for his drive and tenacity in achieving the milestone recorded today, the President praised the ‘‘wonderful team in the Ministry’’ for a job well done.

“It is noteworthy to state that work commenced on the project in March 2017 and test-run commenced around December 2020 and today, what seemed a dream has come to full materialization under Buhari and Amaechi”, Eze said.

Similarly, Chief Eze hailed Buhari and Amaechi over the official launch of assists under the Integrated National Security and Waterways Protection Infrastructure, also known as Deep Blue Project in Lagos.

The project which is the first integrated maritime security strategy in West and Central Africa is aimed at tackling the incidences of piracy, sea robbery, and other crimes at sea. With three categories of platforms to tackle maritime security on land, sea, and air, the deep blue project was jointly initiated by the Federal Ministry of Transportation and Federal Ministry of Defence, and being implemented by NIMASA the to secure Nigerian waters up to the Gulf of Guinea.

Eze said Amaechi has manifestly justified the confidence reposed in him by President Mohammadu Buhari and Nigerians and called on Nigerians to continue to support the Amaechi as more dividends are set to be delivered.

Emphasizing the need for Nigerians to imbibe the culture of protecting public infrastructure, the party Chief said it is grossly subnormal for countrymen, who should be proud patriots to engage in acts of vandalism, destroying critical assets and frustrating the efforts of government in putting the country on the right track.