The 1964 Brawl in the Kitchen of the Flagstaff House: President Nkrumah versus Constable Ametewee, and How Supt. Dagarti Died

Police Constable Seth Nicholas Kwame Ametewee shot at President Nkrumah but Police Superintendent Salifu Dagarti, a British trained Ghanaian veteran Police Officer saved the President by shielding him and receiving the bullets on his behalf. Salifu died as a result of Ametewee’s gunshots. One may say that President Kwame Nkrumah was the most physically attacked Ghanaian Head of State. There were several unsuccessful assassination attacks on him at several locations in Ghana including his office and residence, the Flagstaff House (now Jubilee House). In his 1969 book entitled, “Dark Days in Ghana”, Nkrumah himself put the number of unsuccessful assassination attacks on him at six (6) and he blamed it on the Police and others. He stated, “Members of the Police and the Special Branch have been involved in each of the six attacks made on my life, and have frequently ignored, and sometimes aided, the activities of people they knew were plotting to overthrow the government.”

The date was Thursday, January 2, 1964, the time was about 1:15pm and the setting was the courtyard of the seat of the Government of Ghana, the Flagstaff House. In the company of two security guards and his aide de camp (ADC), Salifu Dagarti, President Nkrumah was about moving from the Flagstaff House to the Christiansborg (Osu) Castle for lunch. 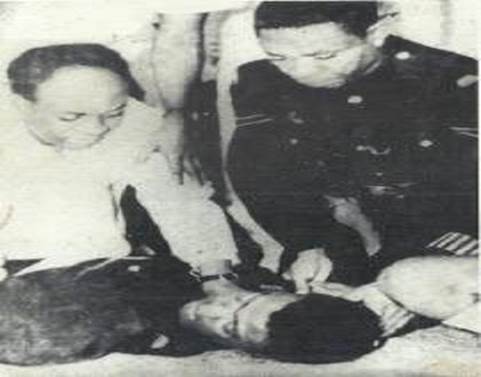 Getting up to see where up to see what was actually going on, Seth Ametewee fired at President Nkrumah again but Salifu Dagarti ran and shielded the President with his body. As a result, Salifu was shot in the head. Two more shots were fired but they deflected through the President’s shirt without hurting him, perhaps due to his bulletproof vest.

After killing his colleague Police Officer instantly, Constable Ametewee tried firing his 5th round at President Nkrumah but miraculously, the bullet ejected. At this point, the President started running for dear life and shouting for help but the armed police officers and senior government officials at the scene made no move. One official was reported to have remarked, “They’ve bungled it again.”

Running and shouting for help, the President headed for the kitchen of the Flagstaff House but Constable Ametewee followed and caught up with the President, trying to club him down in the kitchen, using the butt of the riffle he shot. Unfortunately for Ametewee, the rifle also miraculously slipped from his hands. A fight then ensued between President Nkrumah and Constable Ametewee. Ametewee had bitten the President’s cheek and the President also kicked Ametewee in the groin and Ametewee became unconscious momentarily. It was only at this stage that other police officers intervened, knocking out Ametewee and he laid on the floor of the kitchen of the Flagstaff House. He was then placed under arrest.

At the about quarter to 2pm that day, the Flagstaff House was cordoned off with troops and at about 4pm, the incident was announced on Radio Ghana. No further details were given and for about 12 hours, there was no public comment again about the incident apart from Rodionov, the Russian Ambassador to Ghana telling his diplomatic colleagues that President Nkrumah defeated his assailant. 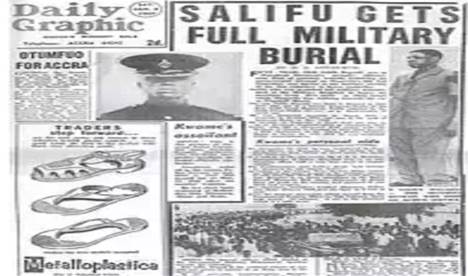 Supt. Salifu Dagarti was recognised posthumously as a national hero for receiving the bullets for President Nkrumah and dying as a result. He was given full military honoured state burial. The Government also pledged to cater for Salifu’s dependents.

In fact, on 5th January 1964 (3 days after the Ametewee shooting incident), the Government dismissed six (6) Police Commissioners and one Superintendent of Police.

The Police armouries were equally taken over by the Army. Assistant Commissioner of Police, John Harley was made the acting commander of the Police Force. The same John Harley assisted Colonel Kotoka and Major A.A. Afrifa in overthrowing President Nkrumah at 6am on February 24, 1966 when the President was away in Hanoi, Vietnam. The physical attacks on Nkrumah might have compelled him to enforce the PDA with iron hands, jailing without trial, people whose deeds were deemed prejudicial to the security of state.

On January 8, 1964, J.B. Danquah was arrested because he was linked to Ametewee’s shooting incident at the Flagstaff House 6 days earlier. It was alleged that J.B. Danquah’s own hand-written speech was found on him, which he intended to broadcast to the nation after Police Constable Ametewee had succeeded in assassinating President Nkrumah. JB Danquah was, therefore, detained at Nsawam Prison under the Preventive Detention Act (PDA) until he died on February 4, 1965 despite the fact that President Nkrumah even gave him amnesty. Ironically, Ametewee who shot at the President and killed a presidential ADC in the process was given a fair trial but J.B. Danquah who was alleged to have bribed Ametewee to kill the President was detained without trial until J.B. died in prison.

The Trial and Conviction of Constable Seth Ametewee 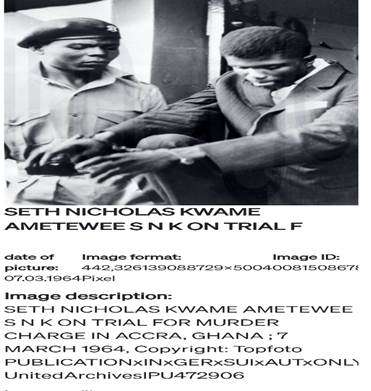 Constable Seth Ametewee was arraigned before the Criminal Session of the High Court, Accra and charged for killing Supt. Salifu and attempting to kill President Nkrumah. Ametewee admitted, firing shots at President Nkrumah on January 2, 1964 but he argued that it would be irrational and illogical to suggest that it was his gunshots that killed Salifu. Contrary to Ametewee’s contention, the autopsy report confirmed that Salifu died of bullet wounds. On April 7, 1964, the High Court presided over by Siriboe J. (as he then was) found the 23-year-old Ametewee guilty of the murder of Salifu and his attempt to kill the President. He was sentenced to death.

However, Ametewee appealed against his conviction at the Supreme Court on the ground that even though he fired at President Nkrumah, his shots were not the cause of Salifu’s death and neither did he intend to kill Salifu. The case became known as Ametewee v. the State [1964] GLR 551. The matter before the Supreme Court was whether or not the appellant (Ametewee) was liable for the death of Supt. Salifu Dagarti despite the fact that Salifu was not his target.

However, the Supreme Court held in accordance with the Criminal Offence Act, 1960 (Act 29) that even though Salifu was not the appellant’s actual target at the time, the appellant was liable for the death of the deceased. As such, Ametewee’s contention was wrong and untenable.

Poignantly, the Supreme Court stated, “If a person does an act with the intent to kill…and his act happens to take effect, whether completely or incompletely, against a different person, he shall be liable to be tried and punished as if his intent has been directed against that different person…”