Construction of Prison Facilities: Why the church is a major stakeholder 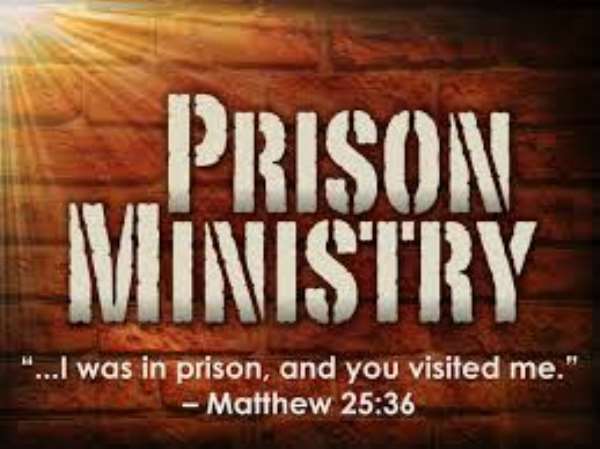 “As part of our efforts to promote the values and principles of the Kingdom of God in our sate and non-state institutions, the church shall seek to train more chaplains and deploy them to various institutions such as the Military, Police, Prisons, Hospice/Hospitals, sports, orphanages, and palaces as well as some corporate institutions.”-Apostle Eric Nyamekye (Chairman, Church of Pentecost)

The Church of Pentecost, after commissioning a modern correctional facility in Ejura for the Prison service has received a lot of backlash from a section of the Ghanaian public, both home and abroad, quizzing why the church is going into construction of prison facilities and not hospitals or job creation. A lot of these traditional and social media commentators forget that, most of the inmates in our various prison facilities come out with employable skills with support from churches; who buy them sewing machines, shoe making machines, etc.

I always tell friends who know little about how things work in the prison that, the service, with its little budget allocation still does its best to give vocational training, moral and formal education to inmates who are interested and willing to get employable skills and knowledge.

With the impactful leadership of the Director General and his Directorates; coupled with support from CSOs, the Ghana Prisons service has migrated from warehousing of inmates to more of Corrections.

If other churches tend to see themselves as major stakeholders in the welfare, reformation and rehabilitation of inmates, just as the COP has done, public safety will be enhanced and our prison will not be termed as hell but a place for real corrections.

The Church’s role in the Criminal Justice System

The criminal Justice System in Ghana is made up of the Judiciary, Police and the Prisons Services respectively. These 3 arms of justice delivery seek to promote a fair and balanced system that will be of benefit to us all.

The Judiciary needs state of the arts modern courts furnished with technological devices to enhance speed in judiciary process. The Police, on the hand needs to be escorting suspects to the courts in well equipped security vehicles and not in commercial cars as we see most of the times. Not to talk of the deplorable nature of cells, offices and barracks for officers in some deprived stations.

The prison, which is where convicted offenders are brought in by Police to come serve their jail terms or remand also do need a facelift as the other two arms.

The Church of Pentecost in 2018 handed over a newly built plush storey building police station with residential apartments for officers in Akropong-Akuapem in the Eastern region of Ghana.

The church again in the same year built and gave out a modern District Police station at Millennium City, a town in Gomoa -Fetteh in the Central region of Ghana to promote security.

These generous acts were captured under the Church of Pentecost’s Police Station and Post Project (PSPP); under the 5year Vision 2023 strategic focus.

The Ghana Prisons service has facilities that now take more than the number of inmates originally built for. The Kumasi Central Prison was built in 1901 to accommodate not more than 700 inmates but currently houses close to 1,877 inmates.

In the Bono Regional capital is the Suyani Central prison which was to house an inmate population of 400 but currently accommodates close to 800 inmates.

The statistics on congestion can go and on and it shows clearly why our prison facilities do need expansions, modern and humane facilities to enhance criminal the criminal justice system and also be in line with the core mandate of the Service.

These arms cannot perform as efficient as they ought to without the private sector coming in to support their budget from government especially when it comes to logistics, infrastructure et al.

All indications from the above show that, the Church of Pentecost, in their Vision 2023, which was started with the Police in 2018 will surely make our criminal justice system one of the best on the continent if not the best in no time with the developmental projects being undertaken for both Police and Prisons.

The Mission and Functions of the Ghana Prisons Service and the continuous need for church support.

The Mission for the Service is well spelt out as “The Service is committed to undertaking the safe custody, humane treatment, reformation, rehabilitation and re-integration of inmates to make them responsible, productive and law-abiding citizens to ensure public safety.”

The above Mission cannot be realized by the service alone unless they get external support from private organizations and churches who will come onboard to give their quota. The church of Pentecost, same as other churches have been very instrumental in the service’s quest to see to inmates getting humane treatment, reformed and rehabilitated.

The COP has shown that, the role of the church in reformation and rehabilitation has gone beyond donations of edibles, toiletries and clothing, to making sure the prisons churn out responsible, productive and law abiding citizens by equipping them with employable skills that will make re-integration into society easier and reduce them being burdens on their families.

Some of our congested prison facilities make it difficult to get inmates a well deserving welfare treatment, especially with their bedding needs; so the need for more of what Church of Pentecost has done and is doing for the Service.

The church is the best organization that can help the prison service with rehabilitation programmes so to erase the long standing perception of prison being a den for churning out ‘criminals.’

The functions of the Service as stated in the NRCD 46 of 1972 states that, the service have two broad functions categorized under Core and Non-core functions.

The Church of Pentecost bought into the non-core functions of the service and built the Ejura Camp Prison. The facility is in line with the exact things spelt out in the NRCD (46) 1972 books of the Service.

The new Ejura Camp prison is an Agriculture settlement camp facility, so inmates who have less than 2yrs to be discharged will be sent there and be trained in modern agric practices coupled with vocational training, to equip them for the life after exiting the prison yard.

The Church’s role in promoting re-integration and reducing recidivism

The perception about ex-convicts is going to change to positive due to the immense contribution the church is doing for the incarcerated. Now, the incarcerated will come out with employable skills, a renewed mindset and show of reasonability.

Prisoners are made up of members from different denominations, different Islamic sects et al. So whenever you want to get angry at a church constructing a prison facility or an Islamic sect building boreholes for prison facilities, remember not all prisoners are murderers, rapists, robbers, arsonists, etc and if they come out not properly reformed, we will all bear the consequences of an unsafe community.

The prison is an extension of the society so let’s support the church to do more for our brothers and sisters in prison for it will be of benefit to us all.