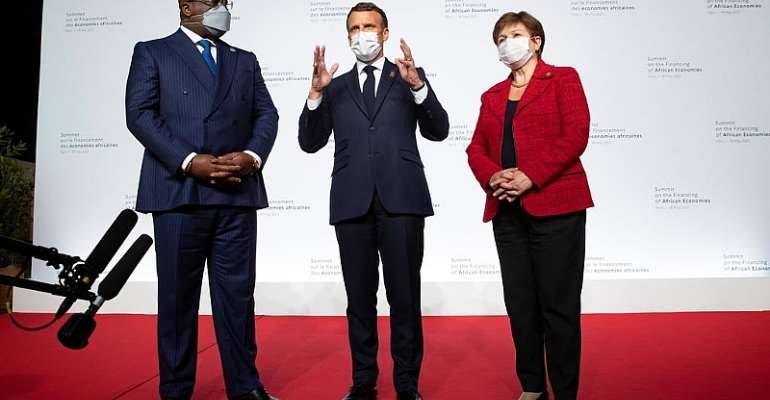 The Paris summit brought together African leaders and global financial institutions seeking to provide Africa with critical financing after the Covid-19 pandemic depleted the coffers of the world's poorest region.

"We will see to what extent we can raise funds to save Africa," said Tshisekedi, adding that the pandemic "left our economies drained because we have had to spend all the little resources we had to fight the disease".

Africa has so far been less badly hit by the pandemic than other regions -- with a total of 130,000 dead compared with 3.4 million worldwide.

But the economic cost has been devastating, with the International Monetary Fund warning in late 2020 that Africa faces a shortfall of $290 billion up to 2023, undermining all efforts at development.

Leaders warned that the risk inequality could open even further as richer countries implement massive stimulus packages while leaving Africa without the financing to keep up robust pre-pandemic growth rates.

"It is a very important moment, we gather here to reverse a process of a very dangerous divergence between advanced economies and developing countries, especially Africa," said IMF chief Kristalina Georgieva in opening comments.

"Growth in Africa means stability in Europe," she added.

She warned that African economic growth would reach just 3.2 percent this year, far behind the rest of the world's projected six percent.

A new reality
Macron said that despite the challenges "Africa has everything to succeed, and the capacity if we collectively decide to propose a new reality".

A moratorium on the service of public debt agreed in April last year by the G20 and the Paris Club -- a group of creditor countries that tries to find sustainable solutions for debtor nations -- was welcomed but seen as insufficient.

Serge Ekue, the president of the West African Development Bank (BOAD), told AFP ahead of the meeting that Africa also needed much longer loan maturities going beyond seven years and interest rates of three percent rather than six percent.

"The issue is therefore not so much a moratorium as obtaining low rates. Because it is better to issue new, cheaper and longer debt than to obtain a suspension," he said.

Togo President Faure Gnassingbe announced that his country had secured an additional $240 million package from the IMF.

While France pledged a billion euro loan to Sudan to help settle its debts.

More than two dozen African heads of state attended Tuesday's summit, one of the biggest in-person top-level meetings held during the Covid-19 pandemic.