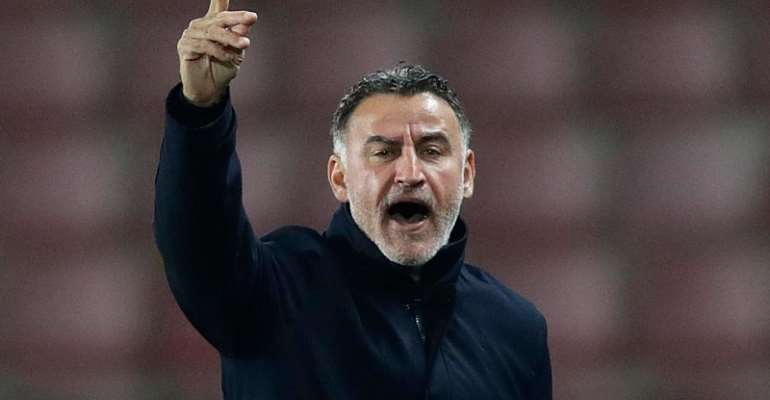 Lille coach Christophe Galtier has refused to single out his goalkeeper Mike Maignan and the rearguard as the reasons for their surge towards the Ligue 1 title.

“You can't sum up the season on individuality, on Mike's performance,” said Galtier as his side prepared to host Montpellier on Friday.

“Mike has been excellent but we can't say that our game is only based on that, on the quality of a defender or of our defence,” he added.

Lille go into the fixture at the Stade Pierre Mauroy on 69 points after 32 games.

Pursuit
Victory will take them six points clear of second-placed Paris Saint-Germain who can cut the deficit to three points when they play Saint-Etienne on Sunday afternoon at the Parc des Princes.

Lille took charge of the Ligue 1 title race on 3 April when they won 1-0 at PSG.

Jonathan David scored the only goal of the game in the first-half. Though PSG dominated possession, they failed to beat Maignan.

Last Friday at Metz, Maignan parried away Aaron Leya Iseka's first-half penalty and made a string of saves before Burak Yilmaz opened the scoring for the visitors in the second half. Mehmet Zeki Celik secured the victory in the closing stages.

After the game Metz coach, Frédéric Antonetti, said: "If Lille do go on to become champions, a large part of it will be down to Maignan."

Key man
The 25-year-old France international was learning his trade at the PSG academy when Lille last lifted the Ligue 1 crown in 2011.

Since then PSG have dominated the domestic scene. Under new boss Mauricio Pochettino they are hunting for their eighth French top flight championship in nine years as well as a place in the Champions League final for the second consecutive year.

“We have one of the best defences in the five major European leagues,” said Galtier. “But we can't reduce Lille's performances to just that even if we haven't been good in our offensive actions lately for different reasons.

“Fortunately, we have a keeper who is there and makes the saves. But do you think that the teams fighting at the top of the table or for a place in the Champions League final, don't have a good goalkeeper?

“In the Champions League between PSG and Bayern Munich, Keylor Navas and Manuel Neuer made fantastic saves - two great goalkeepers - it's crucial if you want to do well.”

Goals
While Lille boast Ligue 1's best defensive record with 19 goals conceded in 32 games, PSG, unsurprisingly with the likes of Kylian Mbappé, Neymar and Angel Di Maria, head the scoring charts with 71 goals in their 32 matches. They also boast a vastly superior goal difference to Lille.

With Monaco and Lyon lurking four and five points behind respectively, Galtier said in the prelude to the match at Metz that his team would have to rely on their collective spirit to give them the edge in the final games of the season.

"Montpeller is a team that scores lots of goals and they're in form,” said Galtier. “They haven't lost in something like 13 games.

"If we want to beat Montpellier, we will simply have to play better than them.”