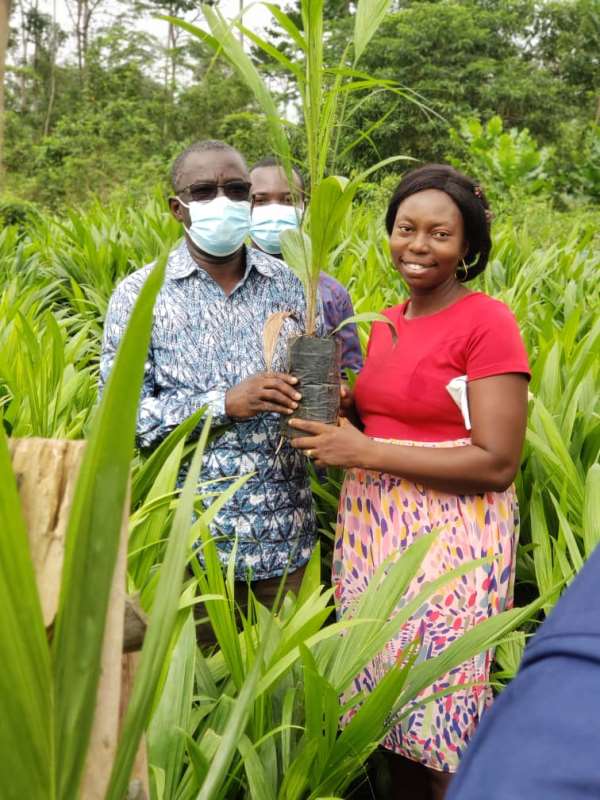 The Atiwa East District Assembly has through the Atiwa East Department of Agriculture distributed 19140 Oil Palm seedlings to farmers under the Planting for Export and Rural Development Programme.

The seedlings were raised at Frimponso, Sekyere-Dankwah and Hiawoanwu. 285 farmers from 13 communities within the district benefited from the distribution.

The Atiwa East District Chief Executive, Hon Kwabena Panin Nkansah in his address to a group of beneficiaries, noted the successes of the district in just three years of its inception.

He highlighted the policies of the president, H.E Nana Addo Dankwa Akuffo Addo towards the development of agriculture. He noted the impact of the Planting for Food and Jobs Programme.

Hon Nkansah explained that the Planting for Export and Rural Development Programme was to ensure that the country generates revenue from exporting its cash crops whiles contributing directly to the livelihoods of farmers and communities where they farm.

He said that the district chose Oil palm because of its vegetation and in 2018, the district raised and distributed Oil Palm seedlings. He said that he was impressed with the state of the first batch of Oil Palm seedlings distributed in 2018 during monitoring of those beneficiary farms. He encouraged farmers to do their best to maintain the seedlings and cautioned that the Assembly was going to monitor the beneficiary farms closely.

The Atiwa East District Director for Agriculture, Mr. Samuel Ofosu appreciated the contribution of the District Assembly and promised the relentless efforts of the Department to ensure the successful implementation of the Government’s flagship programmes.