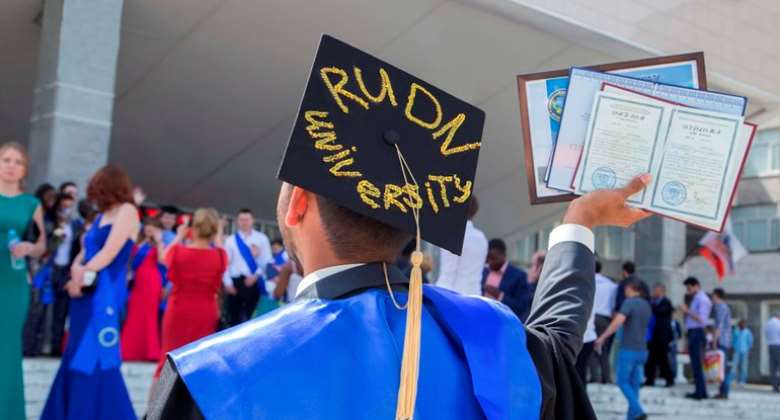 As federal government scholarships are highly limited, Russia's educational institutions are ready to train more and more specialists on tuition paying basis for Africa. There are plans to boost the number of African students, but currently, approximately 60% of the total African students are on private contracts in the Russian Federation.

"The present and the future of Russia-Africa relations is not about charity, it's about co-development," stated Evgeny Primakov, Head of the Russian Federal Agency for International Humanitarian Cooperation (Rossotrudnichestvo), and also a member of the Secretariat of the Russia-Africa Partnership Forum.

The Secretariat of the Russia-Africa Partnership Forum was created last year and it works under the Russian Foreign Ministry. It has, under its aegis, three coordination councils namely business, public and scientific councils. Primakov heads the humanitarian council that deals with education and humanitarian questions for the Foreign Ministry.

While talking about initiatives especially the sphere of education in the relationship between Russia and Africa, Primakov explicitly pointed the changing state of affairs in education and added that the number of Russian state scholarships for African citizens - for the whole continent made up of 54 African countries - has only increased from 1765 in 2019 to 1843 in 2020. At the same time, the number of applications submitted has decreased.

According to Primakov, due to the coronavirus outbreak, some African governments have decided not to launch the application campaign for Russian universities for the academic year 2020/2021 as there are difficulties with transportation, safety, and financing scholarships allocated in the African state's budget.

He, further, mentioned that the Russian system of higher education needs to be adapted to the new realities so that it could gain more value on the international market.

During Russia-Africa inter-party conference held late March 2021, under the theme "Russia - Africa: Reviving Traditions" which was organized and hosted the United Russia Party, Foreign Minister Sergei Lavrov offered an assuring signal in his speech that Russia is stepping up efforts to engage in multifaceted developments with Africa.

That Russia has a lot to offer to African countries in terms of mutually beneficial cooperation as it traditionally maintains very close relations with many of these countries in the continent.

Lavrov told the online gathering "in the past few years, Russia-Africa cooperation has been noticeably stepped up. We are deepening our political dialogue, developing inter-parliamentary ties, promoting cooperation between ministries and departments and expanding scientific and humanitarian exchanges."

With education and training of specialists for Africa, Lavrov said that "over 27,000 African students study in Russian universities." Understandably, this represents a significant increase by 9,000 students, up from approximate 18,000 as given figure in October 2019.

Statistics on African students are, in fact, still staggering. When contacted, the Russia’s Ministry of Science and Higher Education declined to give the current substantive figure for Africa.

In a transcript posted to the official website, Foreign Minister Sergei Lavrov, answering questions at a meeting with the students and staff of Moscow State Institute of International Relations (MGIMO) University, in September 2019, nearly two months before Sochi summit, pointed out that there were 15,000 Africans studying in Russia, and about a third (that is 5,000) of them had received scholarships provided by the Russian state.

That same year during the inter-parliamentary conference, Chairman of the State Duma, Viacheslav Volodin, was convinced that cultural and educational cooperation could be equally important areas needed to be developed and intensified in Russian-African relations.

Volodin further suggested to continue discussing the issues of harmonizing legislation in the scientific and educational spheres, and reminded that hundreds of thousands of African students studied in the Soviet Union and Russia, and that approximately 17,000 African students, majority of them on private contracts, were studying in the Russian Federation.

On June 21, 2019, Dmitry Medvedev spoke at the opening of the 26th annual shareholders' meeting of the African Export-Import Bank. One of the aspects of the relationships, he mentioned educational projects as particularly important, and informed that 17,000 African students are studying in Russia, but hope that this figure will increase in future.

"Friends, of course, we can achieve more in all areas. We simply need to know each other better and be more open to one another," he stressed in his speech.

In addition to above, Professor Vladimir Filippov, Rector of the Russian University of People's Friendship (RUDN), formerly Patrice Lumumba Friendship University, has underscored the fact that social attitudes toward foreigners first have to change positively, the need to create a multicultural learning environment, then the need to expand and deepen scientific ties between Russia and Africa.

Established in 1960 to provide higher education to Third World students, it later became an integral part of the Soviet cultural offensive in non-aligned countries. His university has gained international popularity as an educational and research institution located in southwest Moscow.

In order to earn revenue, Russia's Ministry of Science and Higher Education has already launched a large-scale educational campaign abroad targeting to recruit private foreign students on tuition paying contract annually into its educational institutions across the Russian Federation.

Experts from the Moscow based Center for Strategic Research indicated in an interview with this foreign correspondent that the percentage of Russian universities on the world market is considerably low. Due to this, there is a rare need to develop Russian education export opportunities, take progressive measures to raise interest in Russian education among foreigners.

As part of the renewed interest in Africa, Russia has been working on opportunities and diverse ways to increase the number of students, especially tuition paying agreements for children of the growing elite families and middle-class from African countries at Russian universities.

Worth recalling that Russian President Vladimir Putin sent his greetings to all African leaders and participants of the first Russia-Africa Summit published on the Kremlin website in October that year, that the summit would help identify new areas and forms of cooperation, put forward promising joint initiatives. Further hoped it would bring the collaboration between Russia and Africa to a qualitatively new level and contribute to the development of our economies and the prosperity for both parties.

Later at the plenary session, Putin reiterated that by the mid-1980s, Russia had built about a hundred educational establishments in Africa and half a million Africans have been trained for work at industrial companies and agricultural facilities in African countries. And that 17,000 Africans, including some 4,000 who on federal scholarships, were studying here in the Russian Federation.

Worthy to say that Putin specifically noted the good dynamics of specialist training and education in Russian educational institutions for African countries. Russian and African participants mapped out broad initiatives in the sphere of education during the first Russia-Africa Summit in Sochi.

For the joint work, there was a final joint declaration , adopted by the participants after the Sochi summit. The document outlines a set of goals and objectives for the further development of Russian-African cooperation. The next Russia-Africa Summit, venue to be decided by African leaders, is planned for 2022.