Re: Open letter to Moses Anim MP for Trobu Constituency 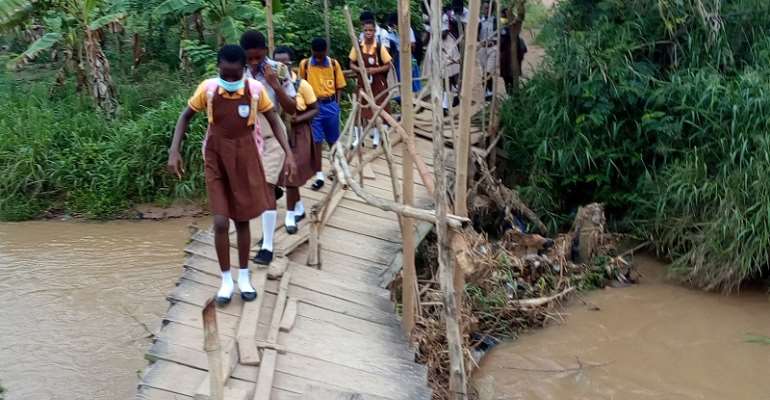 Following publication of my most recent article with the above title, there have been quite a number of comments on my article. What saddens me is the fact that politics have been read into my article. Some commentators have labelled me a politician doing politics with community problems.

After reading the comments, two articles I wrote in the past sharply came to mind. One is titled "The illusion of objectivity, truth and reality: The sad state of Ghana and Africa"

The second is titled "Where do we draw a line between partisan politics and our collective interest (national interest) as a people or a nation?"

A media house asked me for pictures of the bridge with people walking on it, to enable them do a publication. As a result, I went to the bridge this morning. As soon as I started taking pictures, a man from nowhere showed his face. He introduced himself as locally known as "Down There." He says he's the one who farms around the stream and bridge. "Down There" started lamenting to me about what has been happening with the bridge over the years, and how several persons have come to snap pictures of the bridge as I was doing, but all amounted to "NOTHING!"

He lamented how there have been several meetings/confrontations with the MP and the Assembly members over the state of the bridge. He said Atinka TV has had coverage of the bridge, and it had been in the news but to no avail. "Down There" claims that he is the one who has been constantly fixing or adjusting the bridge whenever it's in a critical stage of nearing collapse, but without any appreciation from the "powers that be."

When I finished with the pictures, I crossed the bridge to speak with "Kampala" again, and say hello to him. Kampala attested to and confirmed the claim by "Down There." Kampala also said that since the incidence with the MP over the bridge, he had advised himself to stay away from the bridge. And that only once he again went to assist with adjusting the bridge when there was an urgent need.

As I was about to leave Kampala's place, I saw a crowd of school children and adults crossing from Abensu side to Teacher-Kope. Quickly I began taking pictures of them as they were walking on the bridge.

An elderly man amongst them asked me if I'll be sending the pictures to the media. He said he had himself sent several pictures to media houses, some to TV3 in the past few days and weeks. He introduced himself as "Mr Charles," and said that they have had several meetings with the MP over this bridge before the elections.

Well, this is the Ghana that we want for ourselves! Our mind-set and attitude would make politics a lucrative venture for the few, and would enrich themselves whilst the masses are suffering. What is even more shocking is the attitude of some of our educated folks, those who ought to know better.

The moment one gathers courage to talk or write about the filth in our society and body politics, there are those who have branded themselves as "foot soldiers." And they'll find fault with your write-up and throw all sort of comments at you. Well, I accept the comments in good faith - criticism is part and parcel of being in the inky fraternity. But I’ll wish we don’t jump into drawing conclusions based on partisan politics. May God help and save us in this country! But I think God Himself must be tired of us now, because we have failed to use our head and brains that He (GOD) has given us!

Until there's a total renewal of our tribal and ethnocentric mind-set, to confront issues objectively without partisanship, we are in for a bigger "shithloe" that'll be dug by our corrupt and self-seeking politicians to swallow us all, except the politicians themselves and their families, because they'll have created an escape route for themselves and families; as they have been doing with the laws of the country - twisting them for absurd rulings!

And our "Honour Judges" who ought to represent God in the affairs of Men; are without the fear of God! And depending on your political colours or leanings, you're either happy or angry with any absurd ruling that comes out of our courts - the supposed institution of sanctity and nobility! Ghana in the eyes of God!!

Now, here's the first of the two articles that I want to share. I wrote this one on 29th September 2020. Please read on:

The illusion of objectivity, truth and reality: The sad state of Ghana and Africa!

Yesterday I shared an article titled "Ghana First" following an interview of one Mr Kwame Okyere Darko that I watched. The interview/video was about the award of the Covid-19 testing at the Kotoka International Airport to an unknown company from nowhere, and the exorbitant amount of $150 that was being charged.

After watching the interview/video, I shared it widely. After my sharing, I had a bit of argument with a close friend of mine who was my mate at the University of Ghana, but whom I lost contact with when I finally left Ghana for the UK after my undergraduate studies. Though we were mate from first year at the University, my friend finished a year ahead of me due to my gap year abroad. So for fifteen (15) years since 2005, I lost contact with him till barely two months ago when he spotted me at Madina station even as my face was half-covered with the musk.

For some reasons, I've been unable to get over the argument or discussion that I had with my good friend, and as a result, have ended up having sleepless night. The thing with me however, is that, if sleep eludes me, then I end up wrestling with pen and paper all night. Below are the chats/arguments/discussions that I had with my friend. My friend argued:

I think the argument made was not just about the cost but the readily availability of the results so that commuters will go on with their lives as soon as they know their status. If we were to go by the normal testing standard, that was purported to take about two weeks before results are available, that could cost the traveller more comparably. I am a policy analyst and only dealing with the policy, not defending any politician bro. I understand your point, but this particular argument in relation to the covid test is what I am saying was purely to cater for the current situation the country finds itself. Or do you prefer our airport to remain closed? It takes about two weeks to get results of the test from Noguchi. Don't belabour your point. I have watched the video you sent. Noguchi doesn't have the testing kits for the less than 30 minutes results.

And my responses were:

Hmmm! The moment we jump to defend the indefensible, we give the politicians the audacity to carry on. Nothing would make whatever policy it is, viable than for our state institution of Noguchi to do the job. This corruption ridden of overnight formation of parallel companies is nothing but corruption and blatant stealing of state money. The earlier we rally together to put pressure on our politicians to desist from the practice, the better for us as a people. We should not give them any leeway by talking of policy, be it party A or B. Please, you have lost the argument. Please go back to the post. What is Noguchi for? Please, we should not go on this tangent. Please watch the video/interview and be fully informed on my write-up. So we both know there are different categories of test. So are we saying that Noguchi cannot do the type that produces result in 30 minutes? But a company formed overnight, and even have to tap on expertise from Noguchi? Please, let us stop shooting ourselves in the foot. It makes me sick. I see! It's sad, isn't it? It's sad that our age-old research institution of Noguchi doesn't have the testing kits but a company formed overnight has it. Sad, isn't it my brother? Hmmm! If we carry on with this mind-set, we'll forever be a shithole country.

Hmmm! What bothers me, and perhaps the reason for me losing sleep over the discussion I had with my friend, is the fact that my friend is in the final stages of his PhD studies, and I'm anxiously looking forward to having another mate or friend of mine bear the title Dr, whilst my own wish to become an academic Dr still remains a very distant dream. So my worry is this: if those of us with some level of education, who should know better, and must rally together to get things done appropriately in order to steer our country out of the "shithole," continue to find reasons in support of our "politricktians" or "misleaders," then what hope have we?

It's very sad and pathetic that those who find reasons to support the political rot going on in our country, same people would be seeing all the rots if it were a different party in government. To put it bluntly, politics has shrouded our perception of objectivity, honesty, truth and what have you; even those with an appreciable level of education, and so-called Christians that we claim to be, and even want to build Cathedral for God! This GOD is too humane for my liking!

Where was this so-called company with kits when pressure mounted on Noguchi as the sole Testing facility for Covid-19 in this country? And now that it's time to rake in millions of dollars at the airport, a mysterious company has surfaced, and our soon PhD holders and intellectuals cum policy analyst have reasons to believe that there's justification for the rot going on at our airport! Seriously, I'm beginning to lose respect or admiration for anything Ghanaian or African; even PhD! And who's to blame? The Politicians or ourselves? We have made life too comfortable for Politicians in this country, whilst the electorates (masses) are hoping like frogs!

Hmmm! From the look of things, am I right to say that, we (Blacks) are the most corrupt, senseless, heartless etc of humanity, if our politicians or leaders are reflections of our totality as a people? Something is seriously wrong with our mind-set! Until we all take a sip of that powerful and strong bleach, to clean our filthy minds off blind partisanship, every great and perfect idea conceived, such as "THE CLEANEST CITY IN AFRICA," "GHANA BEYOND AID" and all others would be nothing but a mirage or an illusion! 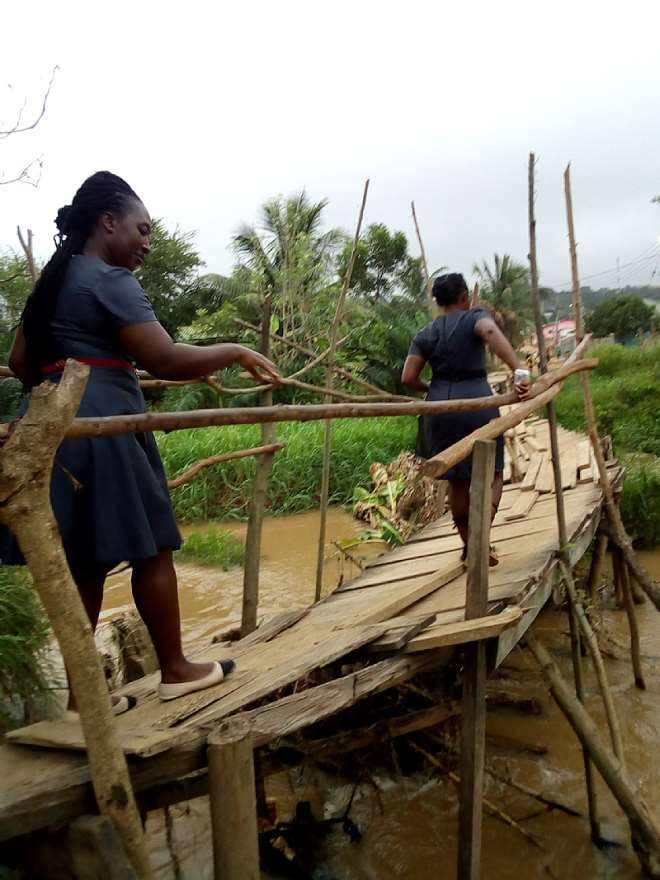 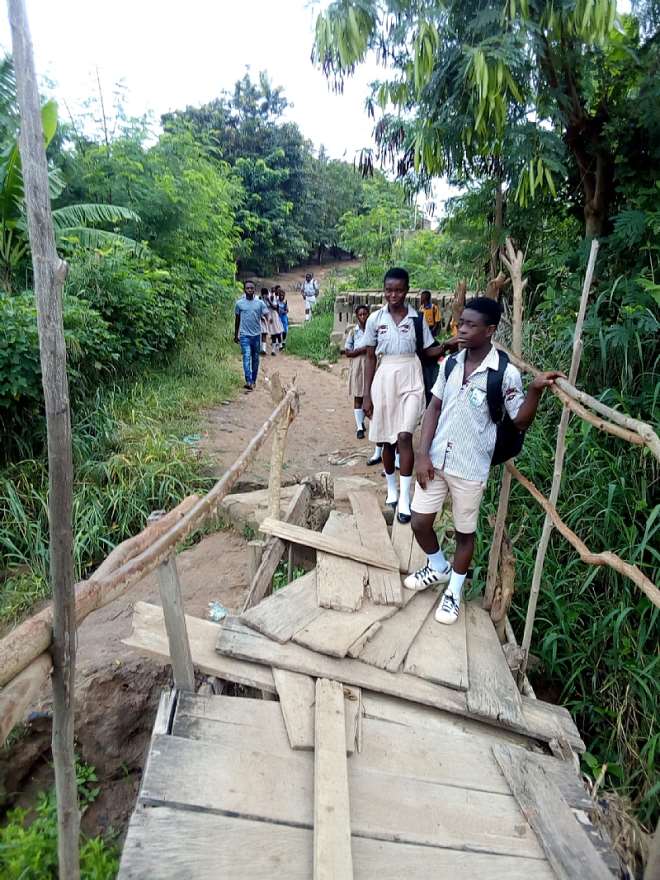 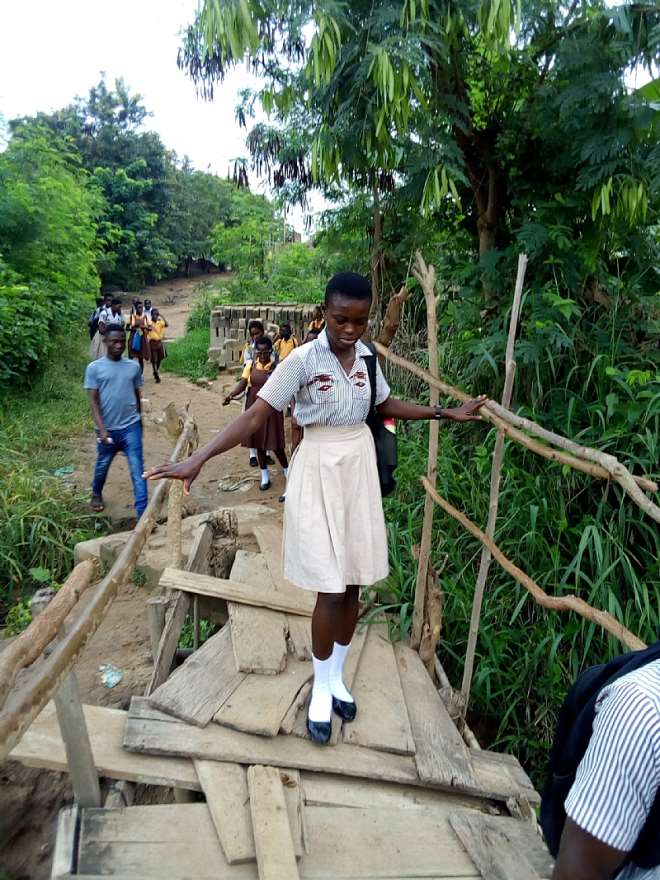 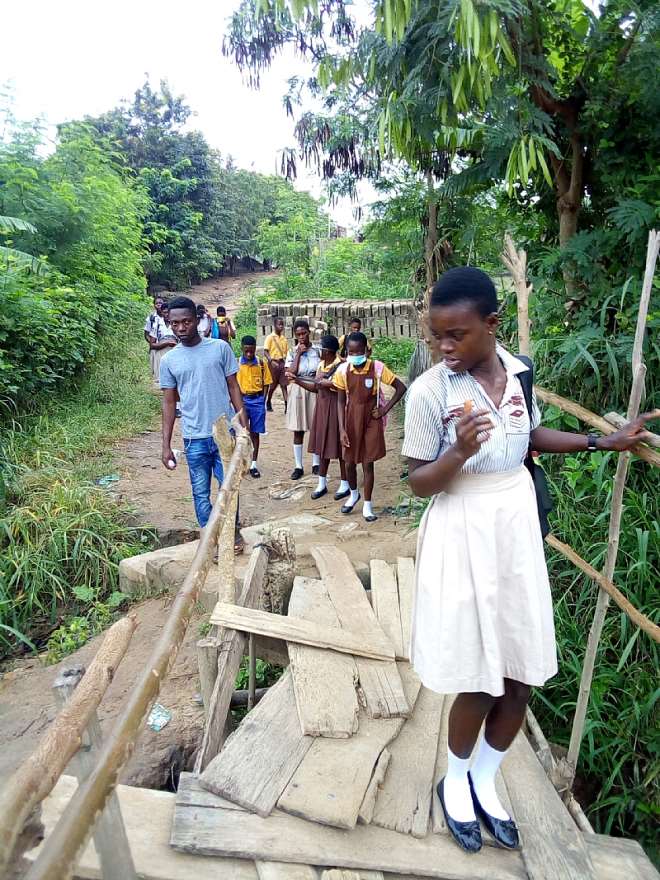 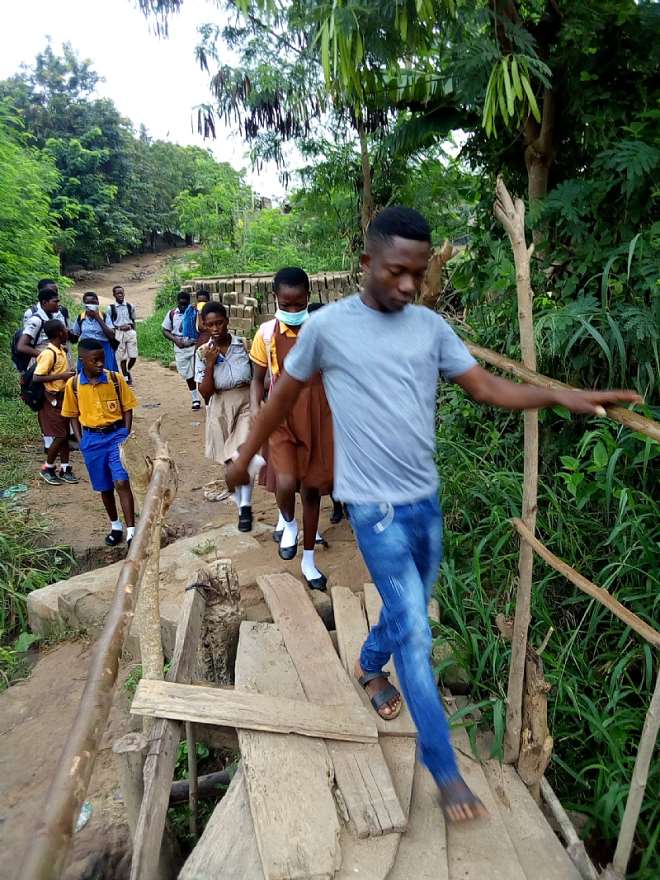 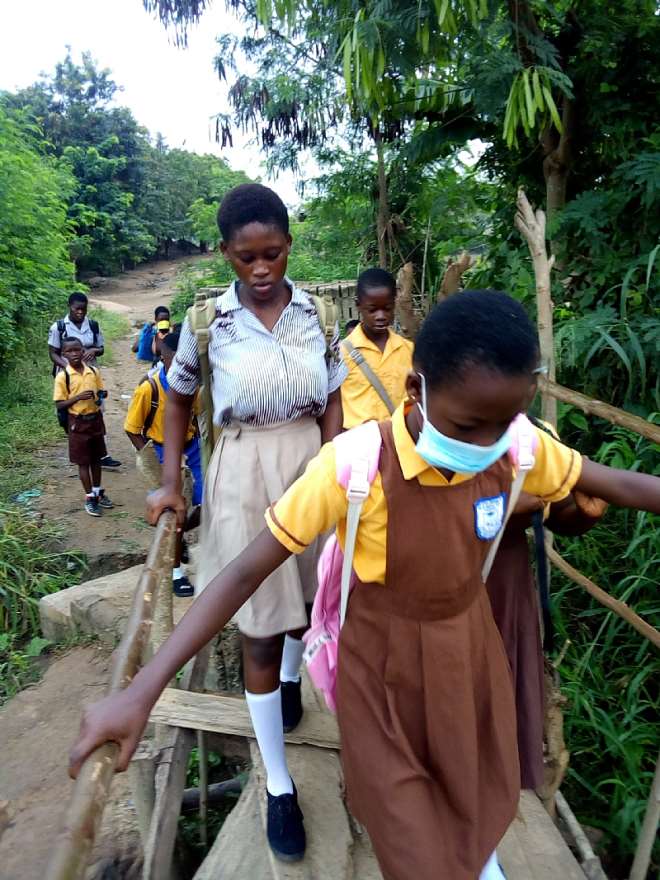