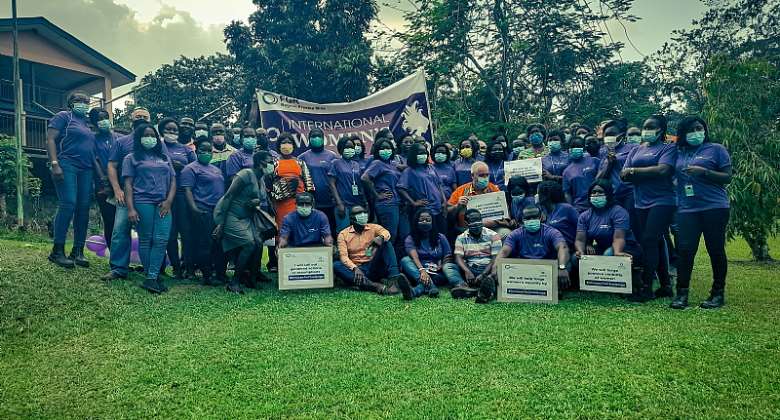 The President of Future Global Resources (FGR) Ladies club has said, Ghanaian women are doing their best to challenge the status quo though there is more room for improvement.

Mrs. Janet Genin says if women have been able to break their restrictions to get out of the kitchen and being housewives they can do more.

She made this statement in her welcoming address when the Ladies Club of the mining firm operating in Bogoso and Prestea commemorated International Women's Day Thursday March 11, 2021 at the plant site with a seminar.

Mrs. Genin further stated that, the theme for this year’s International Women’s Day “Choose to Challenge” does not mean women are better than their male counterparts at wherever they find themselves but want same opportunities.

She said “we don’t seek to show we are better than, but be given the same prominence and platform to showcase our work and what we can collectively do. We should be given same chances and exposure as our male counterparts and colleagues.”

The Ladies Club President urged women to support each other by “challenging themselves by lending, pushing each other up the difficult ladder of leadership and authority and be our own biggest cheering squad in other to head and accomplish the height we so yearn to reach. This isn’t and shouldn’t be seen as a challenge between genders but a supporting partner in the daily endeavours and achieving of a goal”.

A guest speaker who is the General Manager, Institutional Banking, Consolidated Bank Ghana Limited Miss Angela Forson mentioned that, women should be interested to take up a role when the opportunity comes.

“We need the support of men but when they give us the opportunity it is important that we take up the role and learn as we go along because they do the same thing” She stressed.

Delivering her speech via zoom on “How women can become relevant in the working space”, Miss Forson stated that, while working hard with the right image in the corporate space, you need to sell yourself by “exposing what you do” to the decision makers, since the corporate environment is very competitive.

She then advised the ladies to put up good performance and create good image for positive exposure in the corporate space to climb up the ladder.

On her part, another guest speaker, the Prestea Huni – Valley Municipal Director of Education Madam Mary Vida Kwoffie emphasized the need for women to support and open the door for others to rise.

“If you are a lady and you are placed at a position, please don’t look down on other ladies. I believe that everybody’s role is important and for that matter, accord respect to everybody who comes your way. Receive all people, don’t know the calibre of person before you open your door widely”, she counseled.

Saluting the females in the mine for the contributions they have made to the company over the years, the General Manager of Future Global Resources (FGR) Bogoso Prestea Limited Mr. Ahmed -Salim Adam expressed, FGR will lead the path in the country to make sure females in the company are not restricted in the advancement of their careers.

Mr. Adam stated “we will therefore make sure the females are protected at all levels of the organization. We will further make sure that females are given the highest priority for entering roles in this company. The roles that require educational qualification but not experience, will be the primary reserve for females”.

The General Manager believes, in doing so, FGR is ensuring such females acquire the needed experience, to move to the levels they wish to get to.

Marked annually on March 8, International Women's Day is a global day celebrating the social, economic, cultural and political achievements of women. The day also marks a call to action for accelerating gender parity. Significant activity is witnessed worldwide as groups come together to celebrate women's achievements or rally for women's equality.