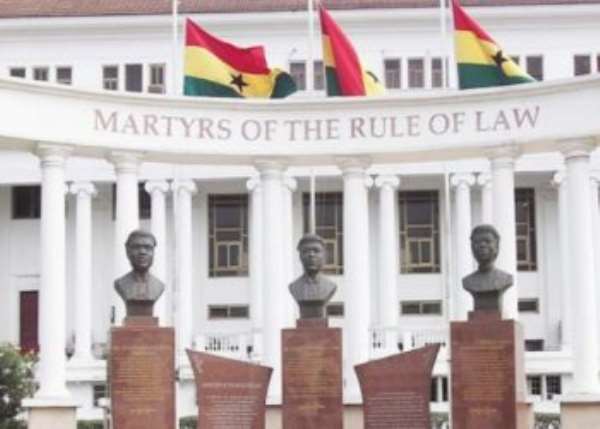 The Supreme Court has dismissed the election petition brought before it by John Dramani Mahama, the 2020 Presidential Candidate of the National Democratic Congress (NDC).

Mr. Mahama wanted the apex court to order the Electoral Commission (EC) to conduct a re-run of the election between himself and President Akufo-Addo.

This is because he claimed President Akufo-Addo did not attain more than 50 percent of the vote following the exclusion of Techiman South from the declaration of the results by the EC.

Five issues were outlined for determination at the start of the petition.

Here is what the court said about these key issues including claims of vote padding.

Whether or not the Petition discloses any reasonable cause of action

Allegations of vote padding and wrong aggregation of votes were raised as the reasonable cause of action in the case. Though this was opposed, the court said it need not focus on the strength of the case to determine whether or not the court has jurisdiction in the matter.

Chief Justice Anin-Yeboah said the court, after critically examining the case so far was satisfied that the case discloses a cause of action and properly invoked the jurisdiction of the court.

Whether or not based on the data contained in the EC’s declaration of results, no candidate obtained more than 50% of the valid votes cast

The court acknowledged the mistakes the EC made in the declaration of the election results. The EC chairperson announced 13,434,574 instead of 13,121,111 to be the total valid votes cast.

The court also noted that Mr. Mahama accepted that the total valid votes cast were 13,121,111 in line with the correction by the EC. It thus said there was no legal basis for anyone to contend that the 13,434,574 should be used as total valid votes.

The Supreme Court also stated that it was wrong to hold the error made by the EC against the commission as the error was subsequently corrected. Chief Justice Anin-Yeboah said Mahama's legal team could also not provide any statute to the effect that the EC needed to consult stakeholders before effecting corrections.

On this issue, the court said it was established in court that President Nana Akufo-Addo crossed the 50 percent-plus one vote requirement even without the results from Techiman South constituency prior to the declaration of the presidential results on December 9, 2020.

The total valid votes with Techiman South inclusive will be 13,220,547. The computation will show that President Akufo-Addo made the more-than-50-percent-plus-one threshold.

Even if all registered voters in Techiman South of 128,018 were added to the petitioner’s results, the second respondent will still make the more than 50 percent threshold (50.79%)

Whether or not the EC’s election results declaration was in violation of Article 63 (3) of 1992 Constitution.

The court said the error committed by the commissioner could not void the declaration. It noted that agreeing with Mr. Mahama’s petition will mean errors by the commission in a post will nullify the truth of the statement even if that is not the case. The Commission did not act in violation of Article 63(3) of the 1992 Constitution. The court added that Mr. Mahama has not been able to prove that none of the candidates got more than 50% of the total votes cast.

The court held that Mr. Mahama did not provide sufficient evidence to back this claim which is considered very serious because of the implications on the integrity of Ghana’s elections. The court said it expected the pink sheets to be exhibited to prove the claims. Allegations of wrong aggregations of votes were also not proven.