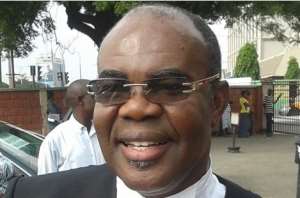 Former Attorney General and Minister of Justice Joseph Nii Ayikoi Otoo says the Supreme Court justices were right to have dismissed the petition filed by John Dramani Mahama as frivolous and unmeritorious.

According to him, the petitioner considered the whole petition a political game instead of a civil claim.

“We have a civil claim in court [and] you know you are going to court to ask for certain reliefs,” the former ambassador to Canada noted.

Nii Ayikoi Otoo, who was speaking on The Keypoints on TV3/3FM on Saturday, March 6, said the petitioner may not have been prepared enough before filing the suit.

The discussion on the weekend current affairs analysis programme bordered on the dismissed petition filed by the former president to challenge the presidential elections held on Monday, December 7, 2020.

All the seven justices of the Supreme Court who sat on the case voted against the petition.

In the judgement read by the President of the Court, Justice Kwasi Anin Yeboah, on Thursday, March 4, the petition lacked merit and adduced not enough evidence for the reliefs being sought to be granted.

Petitioner Mahama has since expressed disappointment in the process and the judgement, saying, for instance, that one of his three witnesses, Johnson Asiedu Nketia, was completely taken out of context.

“I followed the proceedings of this petition and listened to the testimony of our General Secretary, Johnson Asiedu Nketia, from beginning to end. I am quite alarmed at the mutilation of his testimony in the Supreme Court ruling,” Mr Mahama said.

“Many answers of his testimonies in cross-examination were taken out of context to create the basis for the dismissal of our election petition.”

But Nii Ayikoi Otoo said the judgement of the landmark election petition of 2013 should have guided the three-time Presidential Candidate of the National Democratic Congress (NDC) in proceeding to court in the first place.

“Going forward one would have thought that with the benefit of hindsight to us, we would know what will be required of us because all you need to do is to read those opinions [in the 2013 election petition judgement] and then you know exactly what is expected of you.

“How come that we will go to court and now in 2021 say we don’t know what is expected of us and we try to let the whole thing look like it is political?

“It is not a game. it is not political. it is a civil matter that you go to court to prove.”