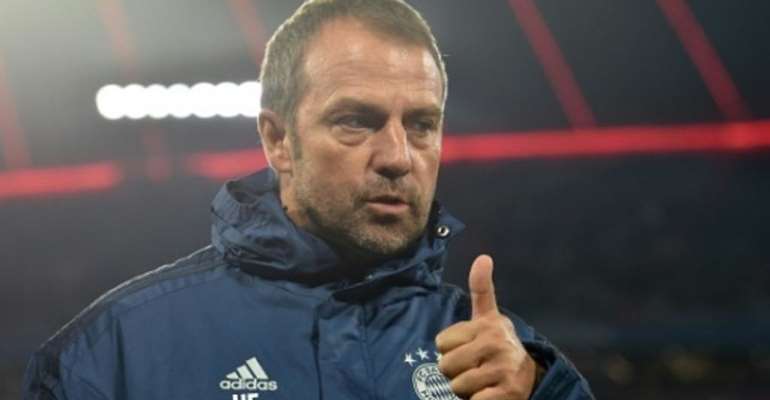 Bayern Munich boss Hansi Flick called on his players to rediscover the flair and flamboyance that propelled them to the 2020 Uefa Champions League after a two-game domestic slump in which they have not won a match.

Since returning from Qatar where they won the Club World Cup - their sixth trophy in eight months - they have only taken one point.

On Saturday at Eintracht Frankfurt they again trailed by two goals. But despite a Robert Lewandowski strike just after half-time could not salvage a point and lost 2-1.

The blip has allowed RB Leipzig to close the gap on the Bundesliga pacesetters to two points with 12 games remaining.

A predicted possession under threat, Flick has urged his men to reimpose their authority in a competition they took by storm last season.

“It's now about us being in top form in the Champions League,” said Flick ahead of the tie at the Stadio Olimpico in Rome. “These are special games for us and I expect the team to be especially motivated."

In the 2020 Champions League format which was reconfigured due to the coronavirus pandemic, Bayern annihilated Barcelona in the last eight and swept past Lyon in the semis before edging past Paris Saint-Germain in the final.

It was the club's third trophy after the Bundesliga and DFB-Pokal.

In the autumn they claimed the European Super Cup and the German Super Cup before beating the Mexican outfit Tigres in February to hoist the Club World Cup.

Flick said there was likely to be a starting slot for midfielder Leon Goretzka who came on as a substitute against Frankfurt after recovering from coronavirus.

"You can't take it lightly coming back after an illness like that,” Flick added. “We hope he can put in a performance like he did against Frankfurt. He's good for our game."

Though the title appears out of their reach, they are one of six clubs flighting for the other three berths that lead to the 2021/2022 Champions League.

The Romans, who go into the clash on the back of Saturday's 1-0 win over Sampdoria, have not graced the knockout stages since the 1999/2000 competition while Bayern have been in the last 16 for 13 consecutive seasons.

Playing down Bayern's recent poor form he added: “Bayern are European and world champions … they've just drawn one and lost one game but before that they won five on the trot.

"Rather than sit and looking for their weak points, I'm going to concentrate on the strengths of my team. We want to play a game that leaves us in the race for qualification," he added.

Stiffer sanctions needed to punish persons who engage in tax...
45 minutes ago