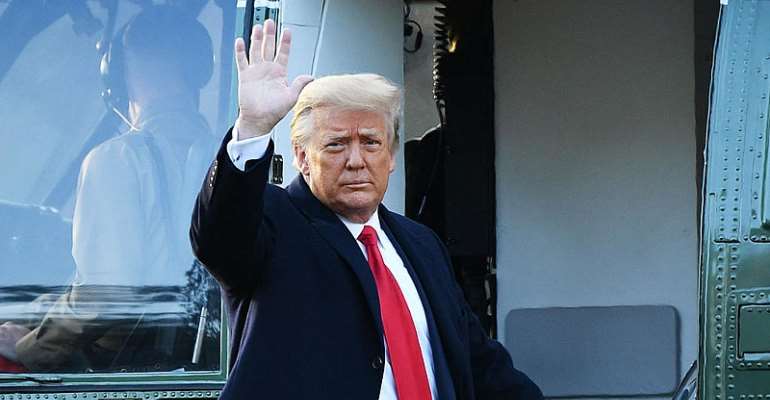 US President Donald Trump left the White House for the last time on Wednesday, skipping the inauguration of his successor in an extraordinary break with tradition. Watch the build up to Joe Biden's inauguration LIVE.

A small crowd waved goodbye as Trump, 74, and First Lady Melania Trump walked a short red carpet and boarded the Marine One helicopter shortly after 8:15 am Washington time for the short flight to the air base where they will head on to Florida on board Air Force One.

"I just want to say goodbye," Trump told the gathering, calling his time in office "the honour of a lifetime."

Trump will be at his Mar-a-Lago resort in Florida when Biden, a 78-year-old former vice president, is sworn in at noon on the US Capitol's western front.

Biden and Vice President-elect Kamala Harris will take the oath of office at the very spot where pro-Trump rioters clashed with police two weeks ago before storming Congress in a deadly insurrection.

The inauguration is unlike any other.

Some 25,000 National Guard troops are positioned in key areas of Washington tasked with preventing any repeat of this month's attack.

Amid the pandemic, the general public is essentially barred from attending the swearing-in, leading to the unprecedented sight of an empty National Mall on Inauguration Day.

Instead, on the Mall's grassy expanse, some 200,000 flags have been planted to represent the absent crowds.

Trump broke days of silence on Tuesday with a pre-recorded farewell video address in which -- for the first time -- he asked Americans to "pray" for the success of the incoming administration.

But Trump has yet to personally congratulate Biden.

The new president will seek to swiftly confirm his Cabinet choices and push through ambitious legislation -- including a $1.9 trillion rescue package.

"We don't have a second to waste when it comes to tackling the crises we face as a nation," Biden tweeted late on Tuesday.

"That's why after being sworn in tomorrow, I'll get right to work."

He plans to kick off his tenure by rejoining the Paris climate accord and the World Health Organization, according to aides, who said Biden would sign 17 orders and actions just hours after being sworn in, setting new paths on immigration, the environment, Covid-19 and the economy.

In first-day moves, he will end Trump's much-assailed ban on visitors from several majority-Muslim countries and halt construction of the wall that Trump ordered on the US-Mexico border to stem illegal immigration, according to aides.

To symbolise the new spirit of unity, Biden has invited the two top senators -- Democrat Chuck Schumer and Republican Mitch McConnell -- and other congressional leaders to attend a church service with him on Wednesday before the inauguration.