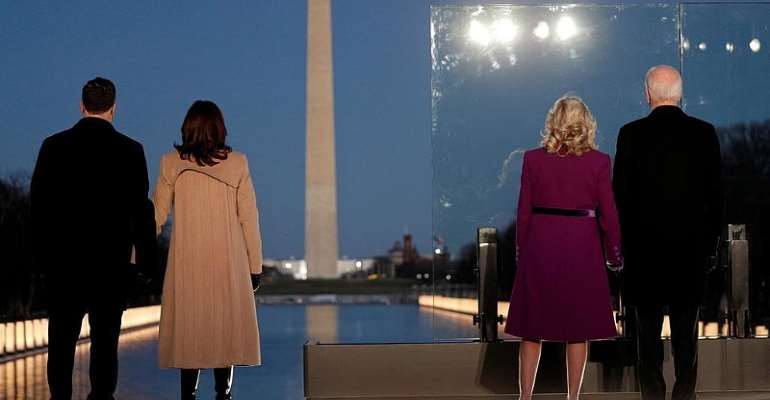 A small crowd gathered behind security fences outside of Washington DC's Lincoln Memorial Tuesday as Joe Biden and Kamala Harris hosted a sunset ceremony to honour 400,000 Americans who have lost their lives to Covid-19.

Four hundred lights, each representing 1,000 lives, were lit up along the monument's Reflection Pool as part of a high-security event that was streamed online.

“To heal, we must remember. It's hard sometimes to remember. But that's how we heal,” said Biden, who will be sworn in as president Wednesday.

While the inauguration committee encouraged those wanting to participate to light a candle in their window, dozens chose to show up outside the memorial instead.

"The last couple of weeks have been pretty disturbing," said Eric, a former resident of DC who worked on Biden's election campaign. "I wanted to be here today to bare witness to it all."

A woman nearby told RFI that watching the ceremony on the video alone "just wouldn't be the same."

Although he's made controlling the coronavirus pandemic the overarching goal of his presidency, Biden has warned things will get worse before they get better.