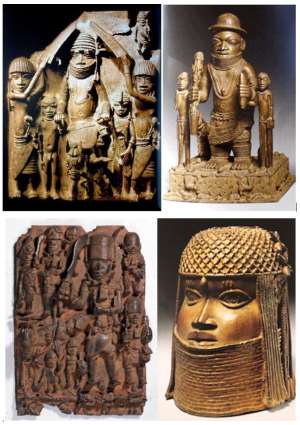 ‘I cannot accept that a large part of cultural heritage from several African countries is in France. There are historical explanations for that, but there are no valid justifications that are durable and unconditional. African heritage cannot just be in European private collections and museums. African heritage must be highlighted in Paris, but also in Dakar, in Lagos, in Cotonou. In the next five years, I want the conditions to be met for the temporary or permanent restitution of African heritage to Africa. This will be one of my priorities.’

Readers will no doubt recall that we have in several articles criticised the position of Herman Parzinger, the President of the Prussian Foundation for Cultural Heritage, on the restitution of looted African artefacts that are under the control of the Prussian Foundation. (1) Readers will also recall that in our last article, How long will Germany insult Nigeria whenever demands are made for restitution? we reported the statement by Hartmut Dorgerloh, director of the Humboldt Forum that restitution of those objects in the Forum was a matter for the Prussian Foundation. (2) We woke up this morning to read that Hermann Parzinger is in favour of restitution of African objects under his control even if these objects had been acquired under circumstances where no injustice was involved:

‘ Even if the objects are not from an unjust context(unrechtkontext),we say: if they are very important(ganz besonders) for the country, then we can discuss that we can return them.‘ (3)

According to Parzinger, the Humboldt Forum provides a new opportunity for discussing German history including the colonial period and the origin of the collections that are in the centre of the German capital. The new building with three historical facades indeed provokes such discussions. We should note however that such discussions had started long before the idea of Humboldt Forum was conceived. (4)

The presentation of the Benin bronzes is disputed. The Ethnology Museum, Berlin, holds some 530 of the historical objects from the Benin Kingdom of which 440 are Bronzes, all of which are considered as objects acquired under unjust circumstances in the colonial period:

‘Benin is a very important subject which we are discussing within the framework of the Benin Dialogue Group with other museums that also have Benin collections and with our Nigerian partners. A new museum is to be built in Benin-City. We support the museum through loans, but I am sure there will also be restitutions. That must be the foundation of a dialogue in which we will together consider which objects must be returned and which objects must remain here.’

These words of Hermann Parzinger, like many others seem at first sight to be promising but a closer look reveals a lot of escape clauses.

Who will determine finally what cultural objects are ‘very important’ for the particular culture? The practitioners of that culture or, as Parzinger seems to imply, together with Western or German specialists? When the cultural objects were created by their owners, they must have thought them necessary. What right has anybody now, centuries after their creation, to determine what is very important for that society? Parzinger is introducing three categories of artefacts: ‘unimportant’, ‘important’, and ‘very important’. Can anyone operate with these categories in German culture? Independent of the restitution question, can anyone say which cultural objects are important and which are not, and for whom?

How would Germans feel, if Nigerians or Ghanaians were to sit somewhere in Africa, with or without Germans, to decide which German artefacts are ‘unimportant’, ‘important’, and ‘very important’ for German culture and which are not?

Parzinger’s statement confirms what we have always maintained: some Westerners believe they have a God-given right or obligation to control or supervise the Africans’ use of our resources including the disposition of our cultural artefacts. Hence the frequent references to museums being built, mostly according to standards approved by the West and the insulting references to the West lending to Africans, African artefacts the West stole during the colonial hegemony. We have often stated that it is not for those who stole our artefacts, now after more than hundred years, to generously offer to loan them to us, the owners. Professor Jürgen Zimmerer has written that it should be Nigeria making the loan and not Germany. We have often underlined the illogic of the thief lending to the owners their own looted objects. (5)

One effect of Parzinger’s statement is the confirmation that pre-Ouagadougou arguments have no longer validity. Arguments based on alleged legality, purchase or gift, within the colonial period, must now be laid to rest.

Another effect of Parzinger’s statement is that the provisions that relate to restitution in the German Guidelines on collections acquired in colonial contexts must be interpreted in the light of the new dispensation. Restitution is no longer something to be pushed far, resorting to arguments or offers of cooperation in order to avoid restitution. (6) Arguments based on statutes of limitation should no longer be advanced. The importance of an artefact to a particular community should be the guiding principle.

Parzinger’s statement brings the position of Germany slightly ahead of that of France where the rule of inalienability has resulted in the need for specific legislation and parliamentary approval, in both the Assemblée Nationale and in the Sénat where resistance to restitution may be expressed and delay caused. The objects to be restituted must be specifically named for an authorization that is very clearly circumscribed. The French whom many assume to work on general principles, work here on specific cases. Legislation for one restitution cannot be applicable to another object not specifically mentioned in the legislation. (7)

German restitution would not face a similar rule of inalienability. The Ministers of Culture of the Federal States (Länder) stressed on 13 March 2019 that present German legislation is adequate for restitution and if need be, they would ensure the adoption of new laws. (8)

Following recent recommendations of a committee of experts, the Dutch are preparing legislation that would enable rapid restitutions. (9) Even the Swiss who did not directly have any colonies in Africa have started saying there should be restitution of African artefacts. Switzerland profited ,like many European States, from the colonial system that allowed the rich country to accumulate thousands of African cultural objects in Swiss museums. (10)

Most European nations have thus taken steps that would enable restitution of looted African artefacts. One nation is missing here and there is no prize for guessing which one: it was one of the first European States to initiate looting cultural artefacts of other peoples and may well be one of the last to allow restitution despite all talks and discussions to the contrary.

The Arts Council England(ACE) has given out a contract for the preparation of guidelines to help British museums in the handling of colonial artefacts, but the report is not yet out. (11) One can appreciate the difficulties in preparing such a report after France, Netherlands and Germany have issued reports and documents appearing to favour restitution of looted African artefacts. There must be many hesitations on the part of the makers of the report as to which direction to take. British museums have been propagating loans of looted artefacts to the African owners. Could the new guidelines simply follow the old suggestions when other States have shown themselves open for restitution?

The words from the President of the Prussian Foundation for Cultural Heritage which controls a considerable number of looted African artefacts in Germany should, normally, be encouraging to restitution activists and supporters. However, we have heard in the past similar statements that made us feel or believe that restitution was round the corner only to have to wait for years to see any concrete action take place. True, restitution takes time, but we would expect the holders of looted artefacts to act a little faster in view of the history of looted African artefacts and their restitution. More than hundred years have gone by since the Benin artefacts were looted in Benin-City by a notorious British Punitive Expedition in 1897 that killed thousands of innocent children, women, and men, sent the Oba (King) into exile, and made off with more than 3500 precious treasures that are now mainly in Western museums that have refused to restitute any.

Parzinger has come a long way from his original position that only artefacts acquired in unlawful ways may be considered for restitution That position left open the possibility that artefacts may have been legally acquired; the object may have been purchased, given as a gift, or sanctioned by a particular principle of law. This is a position held by some Western institutions and personss who still reject restitution of looted African artefact. The new position is indeed held by many activists and writers, as well as French President Macron. This position which we also support, is basically based on the assumption that, on the whole the colonial hegemony was a criminal or illegitimate regime. Once you accept this premise in whatever form, you are bound to accept restitution as the only acceptable solution. If on the other hand you view the colonial enterprise as a selfless sacrifice by Europeans to help poor Africans, bring them into Christianity, you would not necessarily accept the view that looted artefacts must be unconditionally returned. You might be tempted to require the fulfilment of certain conditions, such as availability of museums of European standards and curators trained in European ways. What is very objectionable is the position of those who appear to condemn colonization but at the same time refuse to return objects that have been acquired thanks to the oppressive and repressive colonial system. These persons appear to believe that the looting of African artefacts by mostly States that participated in the infamous Berlin Conference of 1884-5, has nothing to do with the colonial system.

If Parzinger’s declaration is anything other than a ploy to gain time, we would suggest the following:

Do Europeans of our days find it difficult to understand that Africans also want to show their artefacts to their peoples and do not want their children to have to travel to Europe in order to see artefacts that their own peoples have produced? Where are all the European supporters of human rights when it comes to restitution of looted African artefacts?

1. K. Opoku,’Parzinger’s Misconceptions and Misrepresentations about restitution of African artefacts’

2. K. Opoku, ‘How often will Germany insult Nigeria when restitution demands are made?’

4. See for example K. Opoku, ‘Is the stealing of cultural objects of others a specific cultural heritage of Europe or is it a universal heritage?’ https://www.modernghana.com/news/157074/is-the-stealing-of-cultural-objects-of-others-a-specific-cul.html

5. K. Opoku, ‘Nigeria should be the one lending Benin Bronzes to the European museums and not the other way around’

7. K. ‘Opoku, France moves closer to restitution of artefacts to Benin and Senegal’ 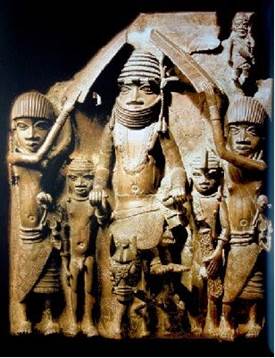 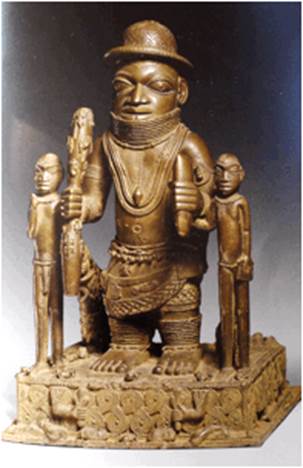 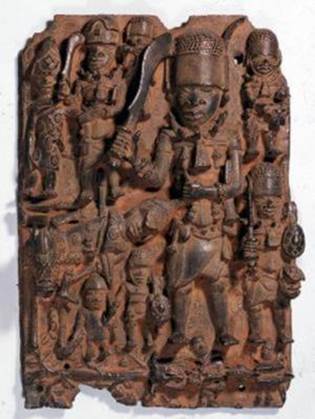 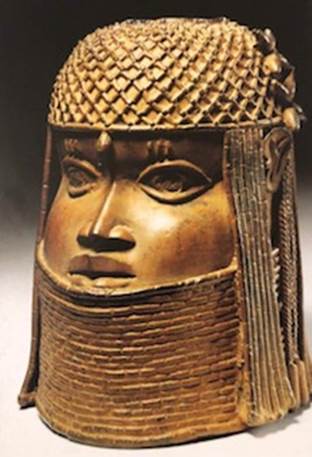