By Maryke VERMAAK and Antoine DEMAISON 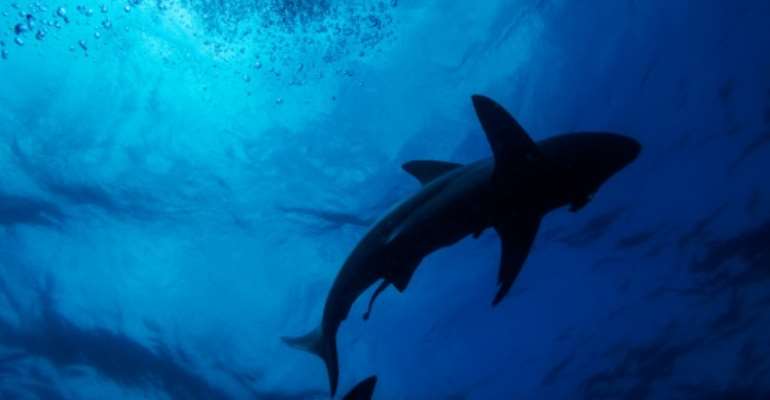 A black-tip shark is seen swimming during a baited shark dive in Umkomaas near Durban, South Africa. By Michele Spatari (AFP)

"They're basically curtains of death," said shark diver Walter Bernardis as he reached over the side of his zodiac inflatable boat to pull up a net bobbing in eastern South Africa's subtropical waters.

The 200-metre (-yard) stretch of mesh is meant to protect swimmers basking on the eastern coast's palm-lined beaches from shark attacks.

But conservationists say the nets trap any large animal that swims too close to shore, making no distinction between sharks, dolphins, dugongs, sea turtles and whales.

"They're a passive system that has been put in the water and everything that puts its head in that net dies," said Bernardis, who quit a teaching job to bring tourists face-to-face with sharks and set the record straight about the fish. 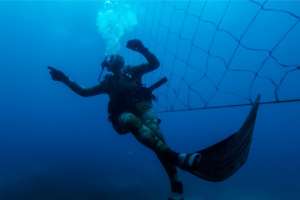 Dozens of South African beaches use shark nets, which activists say are ineffective and harm wildlife. By Michele Spatari (AFP)

The predators gained a bad name in the 1950s, when a string of deadly attacks prompted people to desert the popular white sand beaches in KwaZulu-Natal province, which now draws more than six million visitors each year.

Alarmed, the provincial tourist industry set out to keep sharks away from skittish beachgoers.

Today 37 beaches are lined with nets and baited drum lines, spread over more than 300 kilometres (190 miles) north and south of the provincial capital Durban.

No taste for humans

The barriers have successfully reassured holidaymakers.

Throngs of people spend the southern hemisphere summer in KwaZulu-Natal, packing the beaches with tents and parasols -- although access was limited this year due to coronavirus.

Not a single lethal shark encounter has been reported in protected areas in more than 67 years, according to the publically-funded KwaZulu-Natal (KZN) sharks board. 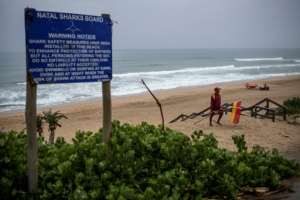 A shark warning notice board at Umgababa Beach near Durban. By Michele Spatari (AFP)

Yet figures suggest the predators rarely strike humans, regardless of whether they are separated by nets.

Only around 100 shark attacks were reported globally in 2019, according to records compiled by the University of Florida.

Human flesh is not usually part of a shark's diet, consisting mainly of smaller fish and other animals such as seals and squid.

Only five out of hundreds of shark species are considered threats to man, including the aggressive bull and tiger sharks.

Keeping them away from people, however, has other costs.

At least 400 sharks suffocate each year after being trapped too long by nets and baited hooks, says the KZN sharks board.

Around 50 of these are species protected by the Convention on International Trade in Endangered Species of Wild Fauna and Flora (CITES), such as the great white and the hammerhead.

"In 2019 we caught 690 animals," said Matt Dickens, head of research at the KZN sharks board, which defends the barriers.

"Many of those were released alive," he added, noting that commercial fishing in South Africa catches 10 times more. 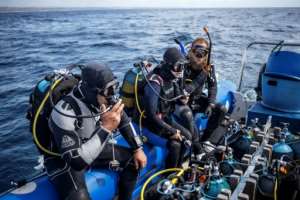 Dive organiser Gary Snodgrass (L) had to change the name of his tours from the 'tiger shark dive' because the species was becoming so rare. By Michele Spatari (AFP)

Shark diver and guide Gary Snodgrass was forced to change the name of one of his tours a few years ago because sightings of certain species had become rare.

"We used to call it a tiger shark dive," Snodgrass explained, as ecstatic tourists in scuba gear slipped into the glistening ocean from his rubber dinghy.

"We can't call it a tiger shark dive any more because we're seeing them so seldom... they have decreased in number dramatically."

Humans kill an estimated 100 million sharks annually, according to scientific findings published in 2013, and eight species are now protected by CITES. 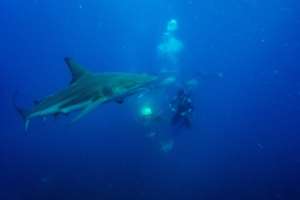 Still there is little public sympathy for creatures associated with vicious gaping jaws and razor-sharp teeth.

But scientists and conservationists stress the animals are important for the ecosystem and key to regulating marine populations.

They also note that shark barriers are barely effective, especially against large species.

In fact, divers have noticed that most animals can swim under the mesh, which is only six metres deep, and often get stuck on their way back from the shoreline, rather than on the way in.

Nets and drum lines give swimmers a "false" sense of security and signal "to people that sharks are dangerous", said Jean Harris, head of South African conservation group Wild Oceans.

What needs to change, she added, is "people's minds".