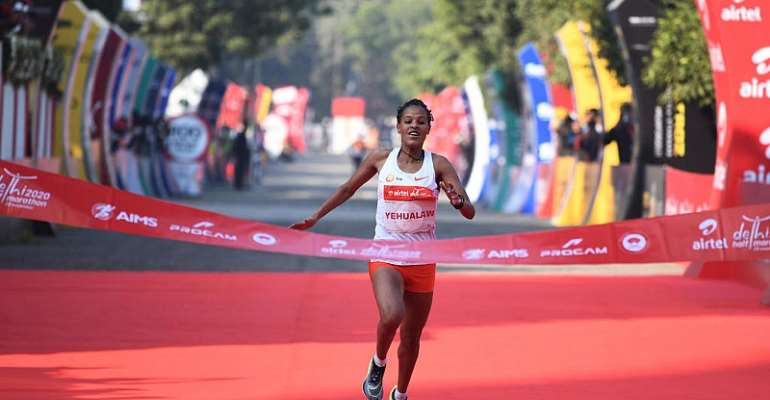 Ethiopia's Yalemzerf Yehualaw and Amdework Walelegn have respectively won the women's and men's Delhi half marathon, brushing off anxieties over Covid-19 and the Indian capital's toxic air

The spectator-less race in Delhi was the first significant international sporting event in India ever since the South Asian country enforced a nationwide virus lockdown in March.

The cash-rich Indian Premier League cricket tournament was moved out of India to United Arab Emirates in September because of the health crisis.

Defending champion Andamlak Belihu of Ethiopia was denied in his bid for a hat-trick of wins by countryman Amedework Walelegn, who won the 21.09 km race in a course record time of 58.53 seconds.

The 21-year-old Walelegn bettered the course record of 59:06, held by yet another Ethiopian, Guye Adola, set in 2014.

Uganda's Stephen Kissa was third among the elite runners in 58.56 seconds. The women's edition was won by Yalemzerf Yehulalaw of Ethiopia, ahead of Kenya's Ruth Chepngetich.

In all, 5,020 runners participated in the various categories of the latest Indian edition of the half-marathon.

India's Avinash Sable, who has qualified for the Tokyo Olympics in the 3,000-metre steeplechase, emerged winner among Indian elite runners, clocking 1:00.30 and in tenth place overall.

There were health worries as smog-laden Delhi is also host to at least 550,000 coronavirus cases.

But tight pre-race protocols including four tests and training in isolation resulted in an incident-free event.

City authorities hosed down the route with chemicals as air pollution in Delhi was nearly five times higher on Sunday than deemed safe, according to a national monitoring agency.

A steady overnight breeze helped somewhat to thin down the pollution that chokes the city of 20 million residents in winter.

“The gods smiled as the sun shone through the haze just after the men's event started,” said an amateur athlete who ran a course away from the elite pack in line with strict health plans for the event.

Television footage showed scores of others participating “virtually” in the long-distance event in other Indian cities.

This year's route in Delhi for the elite runners was different from the one in the last two years.

The runners covered an opening stretch from the start point at the city-centre Jawaharlal Nehru Stadium and then they covered two loops of approximately six kilometers.

The athletes then pounded back to the start-finish line by the same route, guarded by an army of policemen and masked volunteers, some keeping high vigil for stray dogs.

Over the years, the ADHM, as the Delhi race is called, has attracted top runners including former half-marathon world record holder Zersenay Tadese of Eritrea, Florence Kilpagat of Kenya, and Tirunesh Dibaba of Ethiopia.

For Sunday's event, the organisers roped in global sporting icons to endorse the race, labelled by many health experts as “suicidal” and “irresponsible.”