Nkrumah, Rawlings And Hitler: A Triage Of Crass Dictators 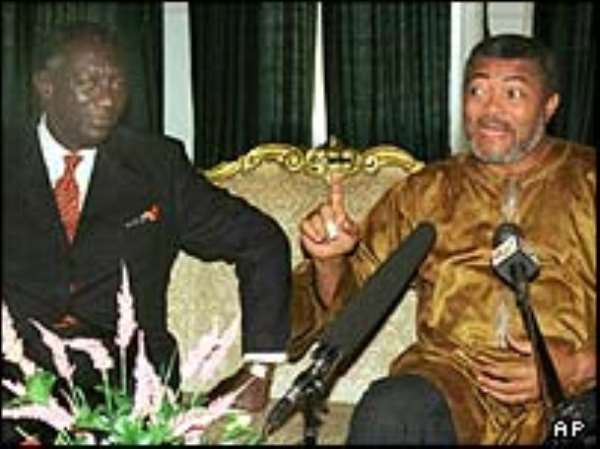 The problem with the Ghanaian people is that neither their politicians, nor their education system nor their religious orientation give them any standards in the virtues or in reasoning or logic or rationality or truth. We are a people bereft of the deeper level knowledge and principles that will enable us to make value judgment of good and right, to spawn good behavior as our sine qua non for social progress and prosperity.

When we were young, we were regaled with the feats of the folk hero Ananse who is the evil genius we admired as our alter ego. People with Ananse’s personality traits are still those we consider as our icons and patriots. Otherwise we should be asking why Nkrumah and Rawlings could be our national heroes in any moral sense? Unless we have not eaten of the fruits of the knowledge of good and bad, nor been exposed to the penumbra of its elyxir, how on earth could we reconcile the evil acts of these Siamese twins to our cultural or national values and represent them as our models and icons?

And if we love Nkrumah and hate Rawlings, aren’t we the victims of moral contradiction? And if we love them both, isn’t there still contradiction in principles and values? But if we shun them both, we are on hallowed grounds of the moral compass; for both are bad actors whose legacies of evil have screwed up the psyche of the people.

Who is Nkrumah? He is no more than someone invited to participate in the independence struggle of Ghana. Nkrumah had failed in all his life’s goals, to become a priest, a lawyer, or a scholar. He had not found any sustainable job either in the US or in the UK. He could not metaphorically learn how to drive his own life, much as he could not literally learn to drive a car. He had never sent money home to his mother and family nor even owned any house or property in Ghana after nearly two decades abroad. He had his passage into the country paid by others and given a sinecure appointment in the United Gold Coast Convention which he utilized to supplant his benefactors.

He acceded to the office of president without knowledge of what independence or freedom and justice meant. To the extent that whatever freedom he claimed to have fought for was meaningless to the people, we can state with certitude that Ghana’s independence benefited only him since it guaranteed for only him his liberation from the shackles of his poverty and personal failures.

In the end, those who helped him to power were all killed, imprisoned or exiled from the country. Masses of citizens were imprisoned without trial. Through an act of parliament, he imposed one-party state on the country with himself as life president…without a deputy. The people that died under his tyranny, or whose lives and livelihoods were destroyed by Nkrumah far outnumber that of any leader of Ghana, given the proportionality of the population at that time. And yet the people still hail him as a national hero.

And who is Rawlings? Like Nkrumah, he had no record of any achievements in his life prior to becoming Head of State. He had failed to become a priest. His academic record in Achimota was one of the worst. He was not disciplined enough for anything and had no knowledge in politics or statecraft. He had not run anything in his entire life, and he had not succeeded in any rubrics in life: He owed money to food vendors; and he had failed his promotion exams in the military five times, only to be waived in by the shenanigans of his examiner and mentor, Boakye Gyan, whose brother he later tortured and executed. He even confessed on a public platform that he had to buy yoke-gari on credit. In short, he shot himself to power by the wrong gate. And while in power, he directly executed many people, tortured others, decapitated others, destroyed the properties of others and appropriated the wealth of the country to himself and his family and cronies. Like Nkrumah, he also betrayed all those that helped him to power. And to date, nobody can point to any discernible policy or achievement he left for the country. And yet the people still hail him as a national hero.

These two dictators with viciously flawed characters learned all their tricks from Adolf Hitler’s playbook called Mein Kampf which details his struggles and murderous and morbid mentality. Hitler had little to no education and had also failed all his exams. He was virtually homeless until he secured a job in the military during the First World War, rising to the rank of a corporal. Like Jerry John Rawlings, he also staged an abortive coup and was arrested for treason and tried in public. During his trial, he gave an impassioned speech which received public approbation and support…..just like Jerry Rawlings during his trial for the May 15 abortive coup. Hitler was given a light sentence and spent his time in jail reading political books.

After his stint in jail, he supplanted the leadership of a political party just like Nkrumah. And just like Nkrumah, he won political power and used the legal means to make himself a dictator, to murder and imprison people without trial, to create a personality cult through the indoctrination of the youth just like Nkrumah. Just as there were The Hitler Youth, there was Kwame Nkrumah’s Young Pioneers. And just as Hitler used parliamentary enactments to accede to absolute power, Kwame Nkrumah used parliamentary enactments to assume absolute power.

Hitler started a world war to rule the world, sabotaged the sovereignty of many countries and implemented forced alliances with other countries; but Nkrumah was rather concerned about the African Union for which he sabotaged many countries in Africa, instigating many coup detats and implementing many fake and forced unions between Ghana and many countries. Hitler killed over six million Jews and other citizens. Nkrumah’s scorch earth policies killed thousands of Ghanaians. Both men were quick to betray those whose helped them to power.

Nkrumah, Rawlings and Hitler were all enemies of their countries. They did much to destroy their people. They were no patriots but all frustrated and failed citizens who instigated much hatred, jealousy and envy because of their hopeless beginnings. Their rebel passions led to the destruction of their countries in varying degrees. They had powerful charisma for which they drew many to line up behind them as they perpetrated great crimes against humanity. Till date, they have totally brainwashed followers who are so irrational that the will never listen to any truth told about their crimes and shenanigans.

But at least after Hitler, the German people repudiated his dangerous ideas, and the country is now leading Europe as an economic giant. That is what happens when a country capitulates from its crazy notions and ideologies.

The case is different in Ghana. Nkrumah remains our national hero with a day set aside as a holiday to celebrate his achievements of which his followers are yet to describe to us. It is almost politically suicidal to criticize him, and his Ananse gimmicks and Machiavellian tactics are all the stock in trade of our present leaders and politicians.

Same with Rawlings who has hypnotized the country with his sudden death and escaped to the grave with all his evil deeds. In spite of his treason, murder, torture, corruption, mayhem, confiscation, and hatred and jealousy and indiscipline, he has ensconced himself in the popular imagination. He has earned for himself seven days of national mourning and a state burial with all flags flying half-mast. Once again, his is the triumph of the evil genius.

With these leaders as our national heroes, are we then surprised of the corruption and moral bankruptcy endemic in the country? We can be only as good as those we consider our national heroes; and if they are so evil, we can only be so evil. After all, what are the lessons we expect to tell posterity with the lives of these two leaders?

That treason is proper? That lies, hatred, indiscipline and jealousy are all good? That betraying one’s friends and killing them at will or imprisoning them without trial are okay?

Or that you do not need to work hard and achieve your goals in life, and that you can fail all your exams and still route your success through a short cut by murder, torture, and stealing; or by trampling on other citizens’ rights and confiscating and appropriating their property without any repercussions

Unless we review our national history in a proper light by shining a torch of reason on these villains and excoriating them in proportion to their evil acts and deeds, this country will remain corrupt and evil, just as these bad actors we are celebrating and praising every day.