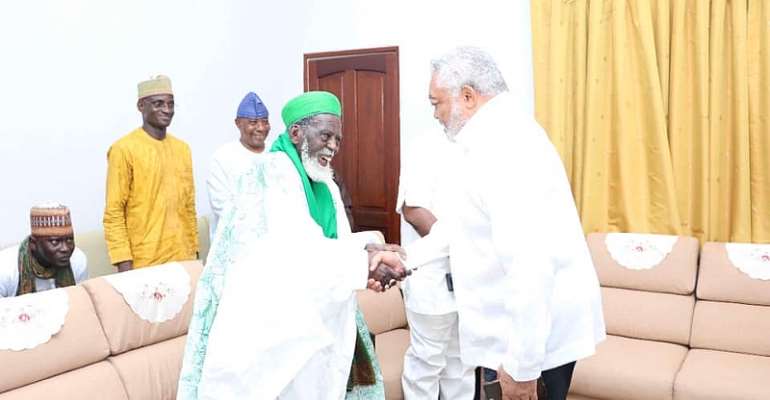 In a statement issued by his spokesperson, Sheikh Armiyawo Shaibu, the Chief Imam said he received the news of President Rawlings’ death with great shock and deep grief.

He described Rawlings as the President with the most significant contribution to Ghana’s political development in recent history.

He said the late President Rawlings was a “great inspirational leader, a pillar, an iconic political figure and a statesman.”

Message of Condolence on the Death of His Excellency the Former President of the Republic of Ghana, Ft. Lt. Jerry John Rawlings from His Eminence The National Chief Imam, Sheikh Dr. Usman Nuhu Sharubutu.

In The Name of Allah, the Most Gracious, the Most Merciful, The Eminent National Chief Imam, Sheikh Dr. Usman Nuhu Sharubutu and the entire Muslim community have received with great shock and deep grief report about the sudden demise of Ghana’s former President and the first President of the Republic of Ghana, His Excellency Ft. Lt. Jerry John Rawlings a couple of days ago.

According to His Eminence, the National Chief Imam in the death of His Excellency the former president, both the family and the nation as a whole have lost a great inspirational leader, a pillar, an iconic political figure and a statesman.

For the bereaved family in particular, the loss of a personality of such eminence cannot go without emotional pain and agony, but as people of faith, we share the common belief that death is unquestionably a destiny common to all humans which occurs at a time divinely determined and immutably fixed.

Therefore, on his own behalf and on behalf of all Imams, Zongo chiefs and indeed the entire Muslim community, the Eminent National Chief Imam wishes to express his deepest sympathies and condolence to both the immediate and extended family members and, indeed, the nation at large in this extremely difficult time.

According to the Eminent National Chief Imam, Sheikh Dr. Usman Nuhu Sharubutu, indeed the memory of his Excellency Jerry John Rawlings, the former president, will go down on record as the president with the most significant contribution to Ghana’s political development in recent history.

It is therefore most befitting that we honor his memory even as the family and nation mourn his departure from mundane life.

According to the Eminent National Chief Imam, Sheikh Dr. Usman Nuhu Sharubutu, our consoling words especially to the former first lady, Nana Konadu Agyemang Rawlings and the children is that may the Almighty God, who gives and takes life, grant the entire bereaved family the strength of heart and spirit to be able to endure the difficulties associated with the loss of such a dear one. 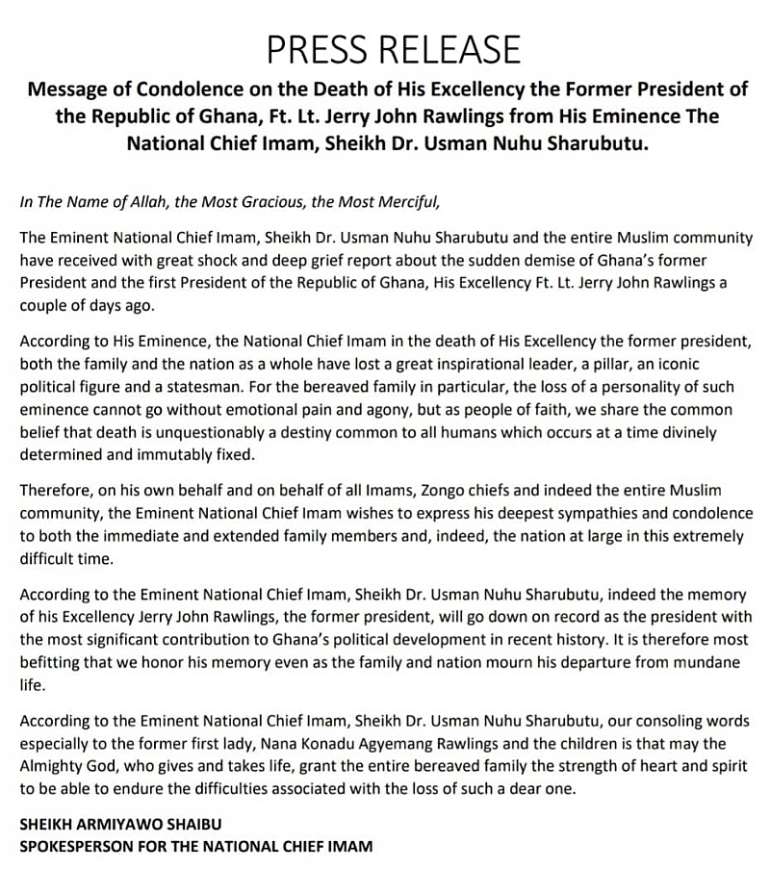 The late Jerry John Rawlings died in the early hours of Thursday, November 12, 2020, at the Korle Bu Teaching Hospital.

Reports say the former President had been unwell shortly after he buried his late mother, Madam Victoria Agbotui in October 2020.

He also directed that flags should fly at half-mast during the period.

Arrangements are being made for a state funeral to be organized for Rawlings.