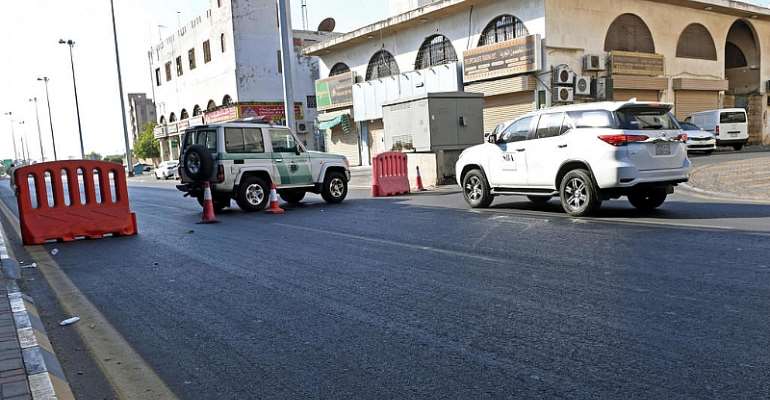 A bomb blast at a World War I remembrance ceremony in Jeddah wounded several people on Wednesday, French officials said, urging its citizens living in Saudi Arabia to exercise maximum vigilance following what it called an attack using an explosive device.

The attack at a non-Muslim cemetery was the second targeting diplomatic missions in recent weeks, after a guard at the French consulate in Jeddah was injured by a Saudi citizen armed with a knife.

The latest incident came as French President Emmanuel Macron, who has sought to assuage anger in Muslim nations over satirical cartoons of the Prophet Mohammed, attended a WWI memorial ceremony in Paris.

Diplomats from France, Greece, Italy, Britain and the United States were involved in the Armistice Day commemoration ceremony in the Red Sea port city, according to a joint statement from their embassies which condemned the "cowardly attack".

"The annual ceremony commemorating the end of World War I at the non-Muslim cemetery in Jeddah, attended by several consulates, including that of France, was the target of an IED (improvised explosive device) attack this morning, which injured several people," France's foreign affairs ministry said.

A Greek policeman residing in the kingdom was among those wounded, a Greek diplomatic source told AFP.

"(Saudi) security services will launch an investigation into an incident of aggression during a gathering of a number of consuls in Jeddah," Ekhbariya said.

The bomb triggered panic as it went off while the French consul was delivering a speech at the ceremony, according to eyewitness Nadia Chaaya.

"At the end of the speech we heard an explosion. We didn't quite understand it at first, but we then realised that we were the target," Chaaya told France's BFMTV.

"We were panicking and feared there could be a second explosion. We left the cemetery and went out into the street and everyone went their separate ways."

"Shameful" attack
While condemning the "shameful" attack, the embassies of the countries involved in the commemoration lauded "brave Saudi first responders who assisted those at the scene".

Roads leading up to the cemetery in central Jeddah were blocked by Saudi traffic police, according to an AFP photographer at the scene.

The French embassy in Riyadh has urged its nationals in Saudi Arabia to exercise "extreme vigilance" since the attack at the Jeddah consulate on 29 October, the same day a knife-wielding man killed three people in a church in Nice in southern France.

Several countries are marking the 102nd anniversary of the armistice signed by Germany and Allied countries to end the war.