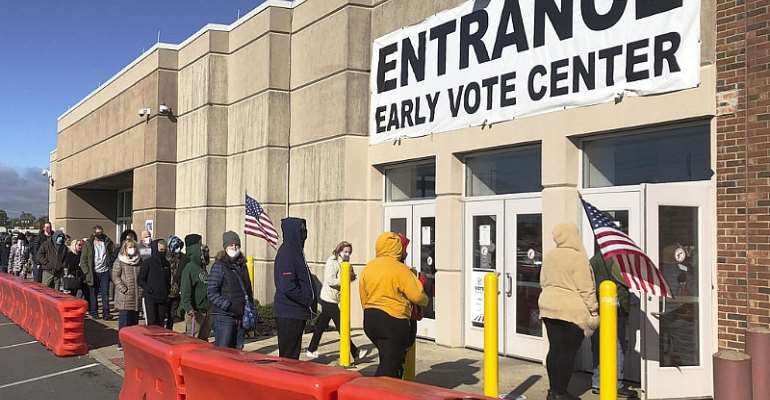 A record number of voters in Ohio scrambled to cast their votes early on Monday ahead of Election Day amid fresh controversy over mail-in ballots. US President Donald Trump has warned that any vote counting extensions could result in physical violence.

Voters in Ohio's most populous city Franklin County, waited for hours in freezing weather for the final day of early voting Monday ahead of Tuesday's Election Day.

More than three million Ohioans have already cast their ballots for the 2020 election either by mail or in-person. It represents 50 percent more than early voter turnout in 2016 and sets a new record, according to Secretary of State Frank Larose.

Like a handful of states, Ohio expanded early voting in response to the Covid-19 pandemic. However, US President Donald Trump has said that having all these ballots waiting to be counted is a recipe for cheating and insists results must be in on Tuesday night.

“Fraud is exceedingly rare anywhere in the United States, but I can speak specifically to Ohio that it is very, very, very rare,” explains Jen Miller, Executive Director of the Ohio League of Women Voters, a non-partisan organization overseeing the vote in all 88 of Ohio's counties.

'Individuals with guns'
Miller, who works closely with the Bureau of Elections, has reported incidents of voter intimidation.

“We have had a county where across the street, there where people with guns. They weren't pointing those guns at anyone but clearly it's nerve-racking to be around individuals with guns,” she told RFI.

Miller said that Trump supporters had also tried to block access for individuals at drive-thru ballots.

The Republican leader and his allies have sought to cast mail-in votes as tantamount to election fraud, and insisted that a winner of the presidential contest should be declared on Election night.

“The danger that could be caused by that extension, and especially when you know what goes on in Philadelphia,” he added, referring to protests last week sparked by the police shooting of a Black man.

Trump made it clear that he is planning to quickly push the presidential contest into the courts “as soon as the election is over”.

Democracy and veterans
Back in Franklin County, people like Jenny Deller, were not impressed with the president's message.

“Votes haven't been counted and already the president wants to undermine the legitimacy of the election,” she told RFI.

The 44-year-old screenwriter, who was volunteering for the Biden-Harris campaign, said this year's election was critical.

“We have to elect people who are going to be the safeguards of government and protect it with as much love and faith and justice that we always have,” she said.

For Tom Large, a Vietnam War veteran, the US president has delivered, especially when it comes to championing the interests of America's veteran community.

“When I came back home, I'd been exposed to Agent Orange. I fought for two years with the previous administration to get my benefits. When President Trump came in, it changed for not only me, but for thousands of veterans,” he told RFI.

Election decider
Both Large and Deller may have to wait to find out if their preferred candidate is the winner. Due to the increase in mail-in voting because of the pandemic, ballots will take longer to count.

“What we'll see on Tuesday are the first counts of votes from early vote centers, plus any absentee ballots that have been received, then we will continue to have rolling updates as the Election Day votes come in,” explains Jen Miller.

“But for ten days, we'll be counting absentee ballots that were postmarked on time of November 2nd but are still in the mail. So, we won't have our final result until ten days after the election,” she said.

Ohio is considered the nation's bellwether in terms of voting the winner of the presidential election. It threw everyone for a loop in 2016 when voters here chose Donald Trump over Hillary Clinton.

“Ohio is a place where it's always intense to be in the middle of a presidential election," continues Miller. "I think because we have some power in terms of the Electoral College, we can swing."

Spreading peace
Biden, who is leading in the polls, sought to capture some of these swing voters in an eleventh hour pit-stop in Cleveland, Ohio on Monday.

“I really trust the people of Ohio that as intense as we can get with one another that we're not going to be particularly violent,” commented Miller, who has both Democrats and Republicans in her family.

If things do get out of hand, she has vowed to extend the state's number of peacekeepers.

"We have clergy, social workers and musicians who go to polling locations to try and spread peace and calm," she said.