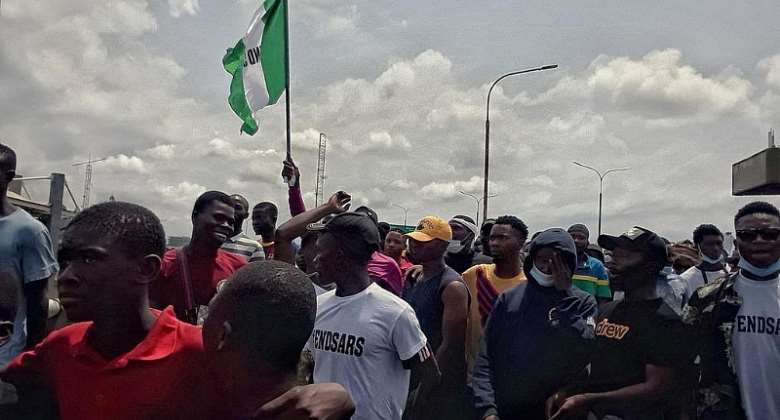 President Muhammad Buhari's appeal for protesters against the special anti-robbery police unit SARS to stop their demands for reform and work with the government is likely to be in vain.

First of all, it was astounding that he failed to mention the at least 12 people dead as a result of the weeks-long protests during his national broadcast.

And there is also suspicion that calm and cooperation will not bring results.

“Your voice has been heard loud and clear and we are responding,” Buhari told Nigerians.

But too many Nigerians, myself included have been subjected to police heavy-handedness.

Curfew
A curfew was imposed in Lagos on 20 October as part of measures to quell the protests which authorities say have been hijacked by hoodlums.

“At least 56 people have died across the country since the protest began, with about 38 killed on Tuesday alone,” the human rights body said in a statement.

The curfew, imposed to maintain safety, degenerated into a breakdown of law and order as angry mobs attacked police stations, public properties and private businesses.

The recent protests across Nigeria began after a viral video showed the killing of a civilian by members of SARS, which has long been at the center of allegations of human rights abuses by some of its men.

The Nigeria Police Force announced it had disbanded the unit following days of protests.

But the restiveness has continued. Citizens are yearning for far-reaching reforms, including prosecution of policemen who have committed crimes to serve as a deterrent to others. Protesters also want police officers to be paid more.

Personal experience
My own encounter with the dark side of the police force came one night in November 2013.

I was sitting in a bar in Lagos after a long day at work.

I had just got in and was perched near the entrance. I suddenly heard a loud banging on the door. No one would open the door. I looked through the windows to see men in black. They were armed policemen.

I beckoned to the people inside - who had locked the door out of fear - to open the door as the banging was getting louder. It was frightening. The bar attendants eventually opened the door.

It was the first time I had seen policemen invade a bar. They came in and randomly picked up people. One officer turned to me and said: “Stand up.” I stood up and showed my ID card.

I had to leave my drink and head outside where I saw a convoy of police vans and men rounding up people and ordering them into waiting vans.

A policeman seized my ID card at gunpoint and forced me, without any explanation, into one of the vans.

Tales of frustration
Inside the vehicle, young Nigerians cried out in anger, frustration and disappointment. They told how they were “picked up for nothing” only to find themselves standing like captured criminals in the police vehicle.

A young man, who gave his name as Moses, said he was arrested while trying to board public transport.

He said his bag, containing a newly bought wedding ring for his wife-to-be, was seized. That bag, he told me, also contained huge sums of cash.

A policeman had allowed him to go after taking his bag. He said he was re-arrested in his attempts to reclaim his possessions.

'Raids'
That night I learned that armed policemen had apparently gone on a raiding spree, picking up people and extorting money in exchange for their freedom.

I heard that some were arrested after they refused to give up their expensive phones.

In my case, I was transported to a police station where some of us were released in exchange for money and other forms of identification.

With my ID card seized, all my explanations fell on deaf ears. About two hours later, with more people picked up in the raid, we were lined up for a photo and taken, again, like prisoners to another station.

It was a bigger facility that seemed to serve as a prison camp of sorts. No one told me my offence.

Night in the cells
I spent the night crowded in a cell with Moses and other people. I was released in the morning. I was lucky. Some remained there because they failed to provide sufficient proof of 'identification' or did not know somebody to bail them out.

I later tried calling Moses but I could not get through to him.

Years later, nothing seems to have changed. The allegations of harassment, abductions and even murders continue.

“My brother, Wasiu, was killed by SARS,” a woman at one of the #EndSARS protests in Lagos, told me.

“He was coming from work at 8:30 pm when SARS stopped him and took him away," she said. "It happened in February 2019. We had to go and report to say we are looking for our brother but they said they didn't see him. But it's SARS that killed him. They didn't even release his corpse,” she added.

There is a huge lack of trust in the police. Disbanding SARS will be the first step towards the security forces regaining credibility.

However, the president's men and women have work to do to convince the people that the police can perform their constitutional roles as professional public servants who protect lives and property. And not endangering the people they are paid to protect.

SSNIT Scandal: Court to decide on mode of trial on December ...
42 minutes ago