Hungry & Angry Youths Can Only Be Temporarily Subdued Or Suppressed 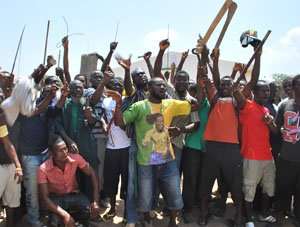 There are African countries breeding more hungry and angry Youths than any other Continent in the world. We already know they are the face of poverty that has moved from Asia to Africa and sadly increasing. What is obvious in most African countries is the impunity, indifference, and arrogance of the minority Nouveau riche that are spiteful to the majority of poor people under them. Though most call themselves civil servants.

When masses are fed up, it only takes the last straw to break the camel's back as we saw in Morocco where one unemployed graduate sparked revolt. Recovery becomes hard and long resulting in the rich eating one another as the poverty stricken cold hands reach into privileged class and grip those that refuse to listen to the voices of reasonable masses. It happened in Lebanon, Somalia, Sudan before it got to Libya (made worse by imperialist opportunists). Yet, greed for loot and power, blind Nigeria’s stubborn Vagabonds in Power.

The sheer complacency that hunger, anger and spite can be suppressed by brutal force of the Police and the Army, is unsustainable to prop up civil peace, law and order. Maybe for a while, until it erupts out of the bottle when enough numbers of the Armed Forces revolt against the same people they are supposed to protect from the masses. You can never pay the Police or Army enough to kill large numbers of people before they put their own lives and that of their families at risk.

We witness the difference between Police that have lost the support of their communities and People that surrounded the Queen, Oba's Palace or Traditional sites. They are like the Supreme Court without the Army or Police to enforce its order. Authority from the People is broader, more durable and cannot be violated with impunity because nobody would dare provoke the ire of their Culture. Africans call it Abomination.

However, poorly paid police living in African slum barracks are more dangerous than the rogues. People are not sure who to fear more. Instead of equating Police functions in Western to African countries, politicians and “Oga at the Top” must stop looting Police funds that are supposed to take care of our Police Force before they would stop extorting money from the community. How can police maintain their vehicles and uniforms with meager salary, who cheerfully does that?

Every community needs the enforcement of law and order. The Police also need the cooperation of the community in solving and preventing crimes. When cooperation and trust between Police and the communities they serve breaks down, the lives of the people are in danger. If you cannot report crimes to the Police, nobody is safe, not even the Police themselves. Each time you use Police to collect taxes by issuing tickets in Ferguson Missouri USA or by extortion in Nigeria, Liberia or Ghana, you are encouraging gun violence.

Moreover, African Police are underpaid which explains the reason for extorting their communities for bribes as if they are collecting taxes. Some of the Police are worse than Armed robbers and sometimes lend their assistance. By supplying or renting arms to Armed Robbers, informing armed burglars of potential rich sources and sharing the loot with them.

Compared to Police in Western countries that have the support of the majority to put their minorities in their place, African Police do not have the same support and respect in our communities. Our Police are used to repress the majority and protect the politicians, leaders and the rich that never make up or come from the majority as in Europe and America.

Promises, Police Reform and Commissions are slogans to buy time not a cure. Do not be fooled, the majority of people in the Western communities support their Police Force. Police are used to enforce old conservative traditional values. Until lately, most of their recruits come from old organizations of militia that kept their culture, forced the poor and minorities to accept the privilege of the white population. They are the enforcers of the old Southern "good old days" many of whom still worship the Confederate Flag in the United States.

Police and some of their courts of law are used to enforce voters' suppression. Police could kill and go simply by claiming some subjective threats to their lives in court of laws. This is why it is still difficult for minorities to get hired into the Police Force abroad. Once hired, they get punished and discriminated against more than their white colleagues; despite more Black Police Chiefs today. African Police are all Black making it difficult to shoot maliciously based on color of the skin. Mourning over and over again. Police Reform and Promises without actions and results are empty.

When we send our Police abroad for training, it is enacting Foreign Police movies: "COPS" where minorities are abused in real life. https://www.washingtonpost.com/nation/2020/06/10/cops-tv-reality-cancel/

The same way our politicians turned their thugs into warlords against their opponents as they learned how to gain political offices. If thugs can help politicians into positions of power, they might as well go straight for the power themselves. This was how the Army, without any idea or training of how to govern, seized Power in many countries.

You can only arrest so many people and put them in jails before they overwhelm their guards, break into your properties and invade your homes where you think there is comfort. Even Slavery, the worst form of human subjugation, became too dangerous and risky as commerce of European "necessary evil". Revolts on the seas and in plantations made it hazardous. Yet people refused to learn thinking danger could be avoided with promises, by divide and rule tactics or offering piecemeal relief.

Unfortunately, innocent people that are closer to the masses without the security or bodyguards of the filthy rich politicians, bear the anger first. Politicians turned blind eye to police harassment on the streets so that their lives would not be threatened. This is a trend that turns opponents and activists warning of impending danger, into political prisoners. But the punishment inflicted on the masses fighting for just cause can only strengthen their resolve. Remember, the prisoners of yesterday became leaders of today.

The problem with Revolts is that the guilty and the innocent pay the price. Nigerians in high places that claim they are not worried about foreign visa bans may be worried if they are located by angry masses in their hiding places in their communities. Even then, Africans Youths are everywhere so the perpetrators of poverty in African countries can only run but leaders cannot hide for long. There was a period, they got visas to foreign universities to celebrate the graduation of their children and as guest speakers, donating stolen hard currencies in order to collect Awards. These days, Africans are waiting overseas to disgrace and beat them up.