For The Love Of Kumerica 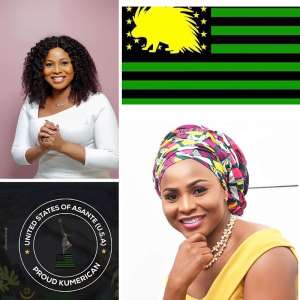 Kumerica is an internet slang (sensational social media word) for the city of Kumasi in the Ashanti region of Ghana. The word Kumerica was coined from a blend of Kumasi and America.

This was initiated by some young men of Kumasi (Oseikrom or the Garden City of West Africa). These young men live their lives full of luxury by their display of jewels, gold chains, ostentatious cars, and riches like the people of America.

Originally, their main purpose was to showcase their riches and luxurious lifestyle, to tell the world, they live in Kumasi but their lifestyle is like that of the Americans.

They speak American English, especially the slangs and accents. They include their style of dressing, clothes for that matter, shoes and cars. Anyone born and living in Kumasi is a Kumerican.

As at now, the word is the most trending in Ghana and globally recognized. Upcoming artists and musicians from Kumasi have popularized the term in their songs to reflect their identity as Kumericans and Ashantis at large.

This reminds me of the American gangs that erupted in the 90s as playgroups. Today, street gangs are found in about 3,300 jurisdictions across the country and are responsible for a disproportionate share of crime and violence.

It all started as a group of young adults who indulged in rap music but their videos and lifestyle proved otherwise. They attracted huge followers who misinterpreted their concept causing loss of lives and brutalities till date.

We may not want to wish same for this new movement in Kumasi as we pray that, the heritage Ghana holds as one of the respected countries in Africa will not be curtailed.

The movement or the people involved, we are not against; be it their music career whatsoever. But certain things I believe have not been set in place as Africans. There are certain things that makes us different from the other continents.

We cannot for no amount of reason, begin something or put ourselves out there anyhow. We need to have an understanding of what we are portraying more than anyone else.

People outside our diaspora, sees us as ignorant halves or illiterates and if we just act out based on our impulses because we need money without researching or without an improved formula, we prove that point of being illiterates.

The good book says, for the lack of knowledge my people perish. Their music I think is good, after listening to a few of them, I feel lyric wise they are good; right from rap to harmony and the videos was done neatly.

The problem first and foremost is mimicking the American and European UK drill and culture. That alone depicts the slavery mentality as Ghanaians even though we have our independence.

Music has different genres as such, they come with different styles, but a style cannot be owned by just one country, take afro beats for instance, it is just not done in Africa, people abroad do same because it’s a style of music.

The point is, if you are taking a style of music, you have to make it your own. You cannot rap about gangs, weapons and using cursed words as a way to showcase who you are as a musician; especially as an African and Ghanaian to be précised.

The ignorance in the sense that, they do not know what they are raping about introduces the youth to gang affiliated activities as they display different kinds of gangs or groups like the cribs, the bloods etc. and doing those gang signs they know nothing about.

Elsewhere, like the US gang affiliations has killed millions of people, thus if a thing of this sort is going to be portrayed, one must have a bit of green light or knowledge about it.

Secondly, these Kumerican rappers may have visited the US, but the hood life, I bet they have never experienced. Over here in the US, it’s the real life being lived here every day and if they are ready to mimic things abroad, it should be done in a respectful manner.

In manner that do not tarnish the image of Africa. Africans are not known to be gangsters or those who carry weapons or known to be hood loons, and it’s okay to portray that artistically but we should have a better understanding on that, so it will be done properly.

Africans are known to be respectful people, but now we have people who use curse words like the Negros. This was a word which was used to speak against black people or black African American.

It has deep roots and if you are going to use it, it really shouldn’t be in that manner. It’s a great idea to use music as an escape from a lifestyle you don’t want anymore, then the message should not carry a bizarre connotation.

It’s safer than to be sorry, it’s better that we understand what we are doing and do it right by taking precautions than to regret it later on. Any youth that has been watching these music videos of the kumericans, please do it for entertainment purposes.

Don’t make too much of it, as I’m scared that, these followers or Africans may have the wrong impression of being a gang banger or having guns or belonging to gang affiliated activities is okay. It is not okay, because people die from it every day in the States.

As long they understand what they are doing, the meaning of it and those purchasing the songs understand that, this is just a show and that’s not really how Ghanaians are, there will be no problem.

Let’s take a look at Nigerians, they have the Afro beats which they best produce, but they always want to infuse a bit of their culture somehow inside the song and that is what we want to see and hear.

I just want it to be introduced in the right way, about the right things and in the right manner and go about other stuff, that will encourage the youth and strengthen other people, I mean to say positive music.

Musicians are musicians and that is the power they have to pull the masses and I hope the kumerican rappers are aware of the power they possess because they are going to end up influencing a lot of youth and the youth we say are the future leaders.

It is our prayer that, all necessary precautions be taken as respectable people in the industry make sure this revolution do not generate into something we cannot control.

What is happening now may seem a joke but for real the movement is on. We plead therefore that, the people involved make the youth aware that, it’s only an act we are imitating so not to lose ourselves in the process.

The acting part should be a clear cut with the brand, who are telling the story of another but will certainly go back to being our original selves. But what happened to our beautiful African stories where all of a sudden, we are deciding to reform our ways to that of foreign?

With the passport, currencies, and names of towns being changed to that of the US, we hope that, the cultural heritage Kumasi holds won’t slip, depriving the next generation of historical people and names of our prestigious Ashanti Kingdom.