The Dividends Of Cooperation

The official dedication of St Michael’s & All Angels Church, Umueze, Amauzari in Isiala Mbano Local Government Area of Imo State, Nigeria on Sunday 18 October 2020 by the Bishop of Isiala Mbano Anglican Diocese, His Lordship, the Rt. Rev. Godson Ukanwa, PhD, JP was a dream come true for Umueze Community. Preaching the sermon at the occasion, Bishop Ukanwa took his text from 2 Chronicles 7. “When Solomon had finished the temple of the Lord and the royal palace and had succeeded in carrying out all he had in mind to do in the temple of the Lord and in his own palace, the Lord appeared to him at night and said: “I have heard your prayer and have chosen this place for myself as a temple for sacrifices. When I shut up the heavens so that there is no rain, or command locusts to devour the land or send a plague among my people, if my people, who are called by my name, will humble themselves and pray and seek my face and turn from their wicked ways, then I will hear from heaven, and I will forgive their sin and will heal their land. Now my eyes will be open and my ears attentive to the prayers offered in this place. I have chosen and consecrated this temple so that my Name may be there forever. My eyes and my heart will always be there.”

Bishop Ukanwa thanked all those who made St. Michael’s & All Angels Anglican Church project possible. He said although there were Umueze indigenes that God used more than others to pioneer the project, the community must appreciate that the final outcome was a result of the cooperation among community members for which were distinguished. He also thanked the numerous clergy who spared time from their crowded schedules to grace the occasion, especially the Amauzari Archdeacon, Venerable Christian Elelia, Parish Priest, Canon Festus Ike and the Church Teacher George Obinna who coordinated and anchored all the efforts that made the project work. 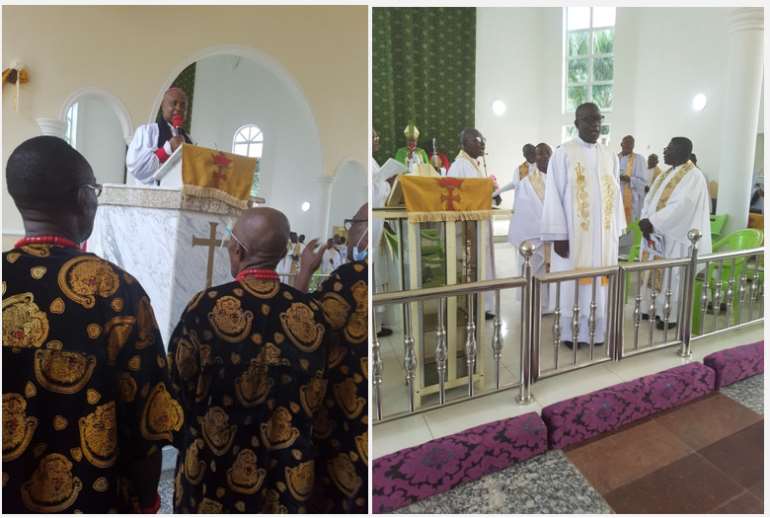 Amauzari Town occupies approximately 1, 200 square kilometers of land, located South of Isiala Mbano Local Government Area of Imo State, under which jurisdiction it comes. During the last Nigerian census in 2006, it was estimated that Amauzari had a population of about 10,000 inhabitants who were predominantly rural farmers and local traders. It is projected that currently, the population of the community must be in excess of 14,000.

The history of Christianity in Amauzari came a long way. At first, Christianity was ushered into Nigeria through Badagry in the Western Region as far back as 1842 by European missionaries. It gradually felt its way to the East through Onitsha and settled at Egbu in 1905 – from where it made its journey into the hinterlands. Through the recommendation of Bishop Herbert Tugwell (1854 – 1936), the London office of the Church Missionary Society (CMS) had given official permission to Ven. Thomas John Dennis and his Catechist, Mr. Alphonso Chukwuma Onyeabo who later became a bishop, to settle in Egbu-Owerri and begin missionary work there.

It is difficult to empirically determine who actually introduced Christianity into Amauzari Community. There was a general belief that Christianity was first introduced into Amauzari Community from Umunkwo, a neighbouring town about 2 kilometers from Amauzari Town Centre. Umunkwo has boundaries with Umuechem, an Amauzari village. But there is no substantial evidence to cling on to this assertion. On the contrary, certain names had become enshrined in the history of Amauzari as the men behind the advent of Christianity into the community. Mr. John Idimogu was the man widely believed to have introduced the Catholic Church into Amauzari around 1923. In the same vein, Mr. Alexander Dike was widely believed to have introduced the Salvation Army Church. In the Anglican denomination, Pa David Anumaka and Pa Stephen Ahubelem were widely known as the men who brought about Christianity to Amauzari. They worked closely with Chief Nelson Ohanuzue, Pa Rufus Anorue, Chief Sir Benson Asinugo and the first Amauzari-born Anglican priest, the Venerable Nathan Nwoha Ndukwu.

When these sons of theirs came back home and introduced the Christian way of life to the community, which was what they learnt from the cities where they lived in, they did not exactly meet with the vehement opposition that distinguished the advent of Christianity in some Igbo communities where Christianity clashed seriously with traditional practices.

In the various villages, the new faith of these returning sons of Amauzari was readily embraced with both hands by a majority of their kinsmen and women. They initially started with a thatch-roofed mud building which served as Church. But the church building only shaded them from the hot sun but not from the rain. Soon, it became necessary for them to find a more convenient accommodation. They had to raise some money for the project. They levied Church members, appealed to the rich individuals among the people and to friends of the community and soon, enough money was raised to start the foundation of the first prestigious Church in Amauzari which was centrally located. So, it now became necessary for the Anglican Communion to build its first Church called St. John’s Church. It was centrally located at Umuechem, the original settlement of the founding father of Amauzari. Only a few families remained in the old ancestral worship and belief in many gods at the beginning of the community embracing Christianity.

As with many other Christian communities in Igboland, women played very active roles in the development and growth of Christianity in Amauzari. The church building offered new hopes as it attracted many members of the town community to a central location on Sundays where they could interact and participate joyously in Church activities. Soon, many aspects of Church programmes were introduced and it made, especially, the youths very happy. It gave them a sense of belonging to ‘Greater Amauzari’. The Church Choir was established. So also were the Mothers Union, Fathers’ Union, Men’s Fellowship, Girls’ Guild, Boys Brigade, the Evangelical Fellowship in the Anglican Communion (EFAC) and many more organizations that made the Church vibrant and attractive to both parents and their children. The Church was daily growing in number until it qualified for the status of a parish and a full-fledged venerable priest was approved for the congregation. Amauzari people became even more united as a result.

Amauzari people embraced with great enthusiasm the publication of the ‘Decade of Evangelism’ in 1995 by His Grace, Dr. Benjamin Nwankiti, Archbishop of Province II of the Nigerian Anglican Communion which emphasized the importance of evangelism in the growth of the Church. By this time, the need had arisen for St. John’s Church to acquire the status of an archdeaconry after so many years of functionality. For that reason, the Anglican Bishop of Isiala Mbano Diocese, Rt. Rev. Godson Ukanwa encouraged the people of Ekwe village to build St. James Anglican Church. Soon after that, Umuagwu built Emmanuel Church. This was followed by All Saints Church, Okwuosu and the recognition of Amauzari as a full-blown archdeaconry with an Archdeacon in charge.

By 25 March 2015, Umueze village commenced the building of St. Michael’s and All Saints’ Church, pioneered by one of their illustrious son, Chief Engineer Sir Johnson Asinugo and others. Soon after that, Umuezeduru also built their St. Stephen’s Church, followed by Amankwu Village’s Holy Trinity Church and Umunumo Village’s St. Andrew’s Church. Today, all the villages in Amauzari have established their own branches of the Anglican Church. The practice of having a Central Church where village elders, women and youths met on Sundays to worship and exchange ideas has become history. The Bishop of the Isiala Mbano Anglican Diocese, the Rt. Rev. Godson Ukanwa impressed on the Amauzari Anglican Communion that the development had two main advantages. First was to bring Christianity right to the doorsteps of the villagers. No longer did they have to travel the fairly long distance from their homes to a central location to hear and meditate on the word of God. This new idea also put into consideration the plight of the aged, the aging and the physically handicapped.

Another advantage was that believers can now become more responsive to the growth of the Anglican Church. The institution of the Church at village level meant that each village would be in competition with others – a healthy aspect of Church growth which every village was eager to participate in. So, from St. John’s Central Church, completely built and equipped in the 1950s, there are now nearly 14 Anglican Churches in Amauzari, each competing to outdo the other in the attraction of infrastructural facilities into the village either by direct involvement or by contracting government or private enterprises which are willing to assist in the developmental projects of the village community. This new development in the Church where every village now had its own Church, rather than cow the spirit of unity in Amauzari Community, fired the people with new zeal which was designed to contain the challenges posed by the decentralization of Church activities. It highlighted the dividends of cooperation.

More Feature Article
Modern Ghana Links
Open letter to Ghanaians - let's give President Akufo-Addo a 'thank you vote' on December 7th
A Window opens in business ties between Russia, Nigeria
Election 2020: The presidential candidate Ghanaians must elect
Bright Philip Donkor: Peace is Ghana’s oxygen
The Beauty Of A Woman By Femi Fani-Kayode
The Wind of Dumsor Is Not Blowing Back Anytime Soon, Comrade Adjaho
Jab Me If You Can: How Political Endorsements Defeat Vaccinations
The Final Push to Victory 2020
Islamic separatism and its treasonable impact on Nigeria
Dossiers Quotes Coronavirus
TOP STORIES