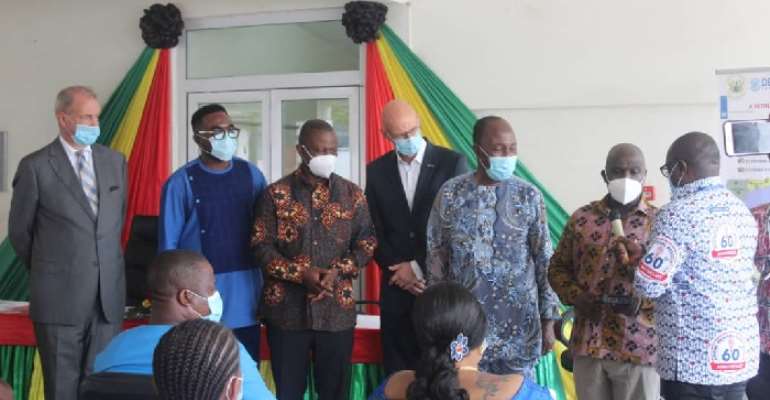 The dignitaries at the handing over ceremony

The Ministry of Health has received 51 boxes of Computer-Aided Detection “4” COVID-19 (CAD4COVID) Artificial Intelligence (AI) Software to help in the detection of Covid-19 on Chest X-rays.

The software was developed by Universal Delft, a Dutch Company, with funding from The Netherlands Enterprise Agency, to guide clinicians in using X-ray images in diagnoses.

It was handed over with two Mobile Screening Vans known as the “Lung”, which contained fully furnished digital X-ray machines on, which the AI Software has been uploaded in a special device in a box.

Ambassador of the Royal Kingdom of the Netherlands to Ghana, Ronald Strikker, at the handing over ceremony at the Ga West Municipal Hospital at Amasaman in Accra, said the entire facility was estimated at 122,000 Euros, (approximately 750,000 Ghana Cedis).

Mr Strikker explained that the CAD4COVID was the first “AI” software that was confirmed to perform at the same level as human expert readers to detect Covid-19-related abnormalities on chest X-ray images, and that it was currently being used in over 28 countries across Europe, Asia, Africa and South America, and urged clinicians to explore it and other new technologies to ensure quality health outcomes.

He said the software has been approved by the FDA and had already been installed in 51 health facilities across the country, and had been successfully operating for almost two months to detect Tuberculosis and other lung diseases.

Director-General of the Ghana Health Service, Dr Patrick Kuma-Aboagye, acknowledged the strong relationship that existed between the two countries for years, saying the introduction of CAD4COVID was timely.

He said although Covid-19 seemed to have dominated the media landscape, the MoH and its agencies had not forgotten about existing disease programmes and other health interventions, and that all health conditions were being given equal attention.

“We do not want to win the fight against Covid-19 only to realise that all other diseases of public health importance have become a major concern to us as a nation,” he stated.

The Director –General, therefore, encouraged all heads of agencies and development partners not to forget about “our existing and unfinished businesses,” but continue to do all they could, to maintain a high level of standards in supporting all ongoing activities, programmes and projects, and pay equal attention to all.

Medical Superintendent of the Ga West Municipal Hospital, Dr Eric Sarpong-Ntiamoah, thanked the Dutch Government for its benevolence, and appealed to the MOH to consider the Ga West Municipality as a beneficiary in the 88 district hospitals the government had promised to build across the country in its quest to improve healthcare infrastructure in Ghana, and to act as an adjunct training centre for doctors, nurses and other paramedics.

Manasseh Azure writes: What happened to Bridget Otoo at Metr...
22 minutes ago