Getting inside the secret world of Banksy, Public Artist No. 1 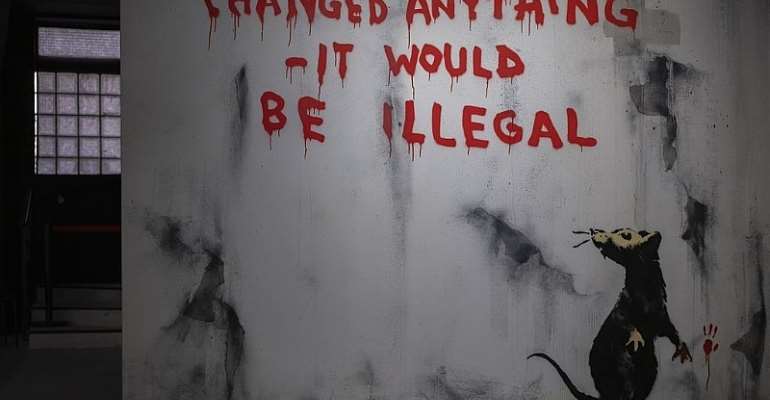 The exhibition "The world of Banksy: the immersive experience" reopened in Paris in June after being closed during the Covid-19 lockdown. Over one hundred lithographs, stencils and reconstituted frescoes offer to "spread the message" of the anonymous and most famous street artist in the world. Curator Hazis Vardar tells RFI about the exhibition.

The anonymous Bristol-born graffiti artist and painter, known for questioning and criticising the limits of the art market, has made it known that he does not approve of any initiative showing his work.

But Banksy explains on his Instagram account, which has more than 10 million subscribers, that he is "not the best person to complain about people posting images without permission".

It is in this context that the exhibition "The World of Banksy" was created at Paris's Espace Lafayette Drouot in June 2019 with 42 reconstructed frescoes and stencils and 51 framed works (lithographs)..

The exhibition is split into three main geographical regions: UK & US, France, and the Palestinian territories, places where Banksy has been active since the 1990s. More than 80 percent of his works were created in the United Kingdom.

Q: Why an "unauthorised" exhibition on Bansky in Paris?

Hazis Vardar: The exhibitions on Bansky are all 'unauthorised' because we don't know who Banksy is and he will have to give his name.

We are doing copies, because the originals you can't find them anymore, they are destroyed generally.

Banksy has made a declaration saying that he always agrees with people making copies to spread the message, this is opposition.

The goal of the exhibition is to spread the message and make people know about the street art. They can see the worldwide work of Banksy in one place and understand the man and the artist.

Q: What is the 'message'?
HV: For Bansky, the art market is speculation and he denounces it every day.

When he makes a profit he gives it back, to buy a boat to help migrants in the Mediterranean for example. (A reference to the M.V. Louise Michel rescue vessel, financed by Banksy).

For Bansky, the message is different depending on where he paints: in France, the US, the UK or the Palestinian territories. In each geographical location you understand the message better.

Banksy is denouncing what is wrong in a society.
Q: Who recreated the stencils and frescoes?
HV: I found 10 street artists and told them that we were going to do a tribute to Banksy and to street art. First they didn't accept, it's against their philosophy. Then I told them 'you don't give your name', the artworks are going to be painted on the walls and won't be sold once the exhibition is over, in the spirit of the street art.

Q: What is the meaning of the animals - rats and monkeys - often used in Banksy's artwork?

HV: For me the rats are the street artists. They go out at night when the sun is down. You never see them but you know they are there, generally they are underground. It's also a reference to 'Blek le rat', one of the first stencil graffiti artist in Paris.

For the monkeys we can say for the moment and not insulting the country, the UK, that I love very much, that the Parliament looks like a monkey Parliament, I'm talking about Brexit of course.

Banksy painted 'Devolved Parliament' in 2009 (sold for 11,1 million euros in 2019 at Sotheby's in London) and he was a visionary, this is the central reality of an artist.

Q: What's your favourite work in the exhibition?

HV: My favourite work of Banksy in this exhibition is the one from Central Park when he sold original artworks for 60 dollars.

Only a few people bought them because they found it nice and not because of the name of the artist.

After he authenticated them, these paintings have much more value.

One day we sell a painting for 1 million euros and tomorrow 2 million without any reason, it's totally artificial.

Q: Do you know who Banksy is?
HV: We have figured out that Banksy has a lot of money. But maybe we are wrong, maybe he learned to live without money, with a normal salary, and doesn't need to live like a rich man.

I think that he is an illustrious unknown and that it doesn't matter who he is.

Banksy is probably a whistle-blower. And it doesn't matter who sounds the alarm, what's important is the alarm.

I couldn't do this exhibition if I didn't agree with him. I have personal political convictions.

Akufo-Addo will have no choice than to assent to Anti-LGBTQ ...
13 minutes ago