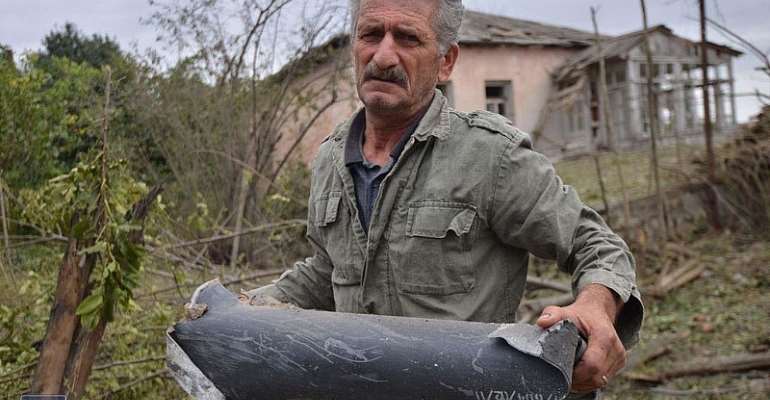 A decades-old border dispute between Azerbajan and Armenian separatists in the Nagorny Karabakh region in the South Caucasus erupted in fighting on Sunday and continues as world leaders call for calm.

Dozens of people have been killed, although the numbers remain in dispute. According to the Armenian foreign ministry, a civilian was killed on Tuesday in the town of Vardenis after it was targeted in a drone attack and shelled by Azeri military. It added that this is the first civilian death in Armenia since fighting broke out on Sunday.

"The Azerbaijani side launched massive artillery shelling of Armenian positions, preparing for a fresh attack," according to Armenia defence ministry spokesman Artsrun Hovhannisyan, who gave an update on social media.

The defence ministry in Azerbaijan said that "fierce fighting continued overnight asArmenia's attempted counter-offensive to win back positions it lost to Azerbaijani forces was repelled."

The landlocked, mountainous region in the South Caucasus was the site of a previous war over the region in the early 1990s that killed some 30,000 people, and occasional fighting has broken out since, most recently last July.

Fearing a full-scale war, world leaders including German Chancellor Angela Merkel and US Secretary of State Mike Pompeo called on both sides to stop the violence.

Both French President Emmanuel Macron and Pompeo have called for talks with the Minsk Group, which was created by the Organization for Security and Co-operation in Europe (OSCE) expressly to resolve this conflict. France, Russia and the US co-chair the committee.

"We will trigger in the coming days a co-ordination of the Minsk Group to clear up what happened, who is responsible and find a way out," according to an official at the Elysée on Tuesday.

Speaking to reporters, Kremlin spokesman Dmitry Peskov said on Tuesday that Russia wanted the fighting to stop, adding that any indication of contributing military support to either side would only make the situation worse.

The UN Security Council has scheduled an emergency meeting behind closed doors on the matter at 2100 GMT.

Nagorny Karabakh is technically within Azerbaijan but the region is run by ethnic Armenians and is supported by Armenia. The breakaway region is not recognized by any country internationally as an independent state, including by Armenia.