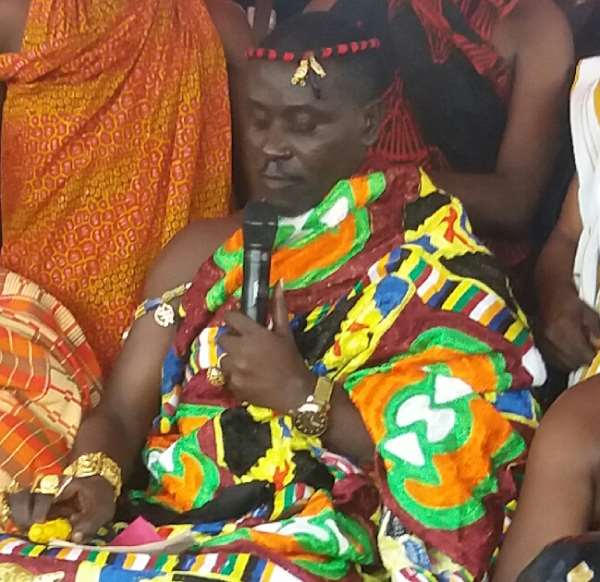 Chiefs of Sankore in the Ahafo Region have appealed to the government to assist revamp their forest reserve which has been destroyed by illegal chainsaw operators.

Their appeal was made when His Excellency (H.E) President Nana Addo Dankwa Akufu - Addo paid them a working visit to inspect some projects been rolled out by the government.

Addressing the President and his team, the Omanhene of Sankore, Nana Appiah Kubi (III) said the government must supply them trees for afforestation because currently, the forest which was classified as one of the best in timber production in the country is gradually fading.

He explained that illegal chainsaw operators in and out of the region have taken over the forest irrespective of efforts made by chiefs to question them in the course of their operations.

" We have complained to our DCE several but still people are attacking the forest illegally " Nana Appiah Kubi (III) fumes.

According to him, the current state of the forest which is an eyesore is due to how chiefs who are highly respected are sidelined by the government. He told the President to reconsider the inclusion of chiefs in managing the forest to keep it on track as expected.

He promised that chiefs are ready to give their best to maintain the standard of the forest if only government gives them the nod to be part of the management so far as the forest is concerned.

Nana Appiah Kubi (III) wanted the President to visit the forest for first-hand information but due to time factor it did not happen expressed, chainsaw operators are not selective in their operations and this is leading the forest to grassland.

Responding to the call of the chiefs, H.E. President Nana Addo Dankwa Akufu - Addo said, it is laudable and the government will give it the needed attention in no time.

He added that chiefs must have a say in managing the country's forest reserves in other to maintain standards so their call is a welcoming one.