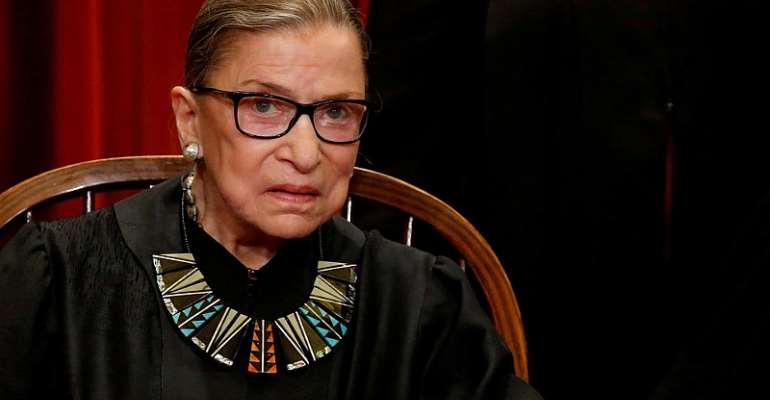 Remembered widely as a feminist and liberal dissenter on the Supreme Court and as only the second woman on the highest court in the United States, justice Ruth Bader Ginsberg died due to complications of pancreatic cancer on Friday night. She was 87.

A litigator and strategist who was renowned for her defence of women's rights, her writings on the majority opinion were important documents that highlighted sex discrimination.

From in front of the bench to behind it
Nominated by President Bill Clinton in 1993, she was confirmed by the Senate with a vote of 96 to three.

It was not her first time in the Supreme Court — as a litigator in Reed v Reed (1972), she successfully argued that administrators of estates cannot be necessarily named, or preferred, as men, only because of their sex.

Hundreds of laws were changed throughout the country after this ground-breaking decision and would serve as the precedent against gender discrimination.

From behind the bench in her Supreme Court robes, she continued her work.

Virginia Military Institute (VMI) refused to admit women, which the Supreme Court ultimately found was unconstitutional, specifically against the 14th Amendment, known as the amendment that expands the protection of civil rights.

She became the head of the four-person liberal dissenting bloc on the court, which included the other two female justices, Sonia Sotomayor and Elena Kagan, as well as Stephen G. Breyer.

The court became more conservative and right-wing but the liberal bloc held their ground, attracting attention for their pointed dissent, usually written by Bader Ginsberg herself.

Pop culture notoriety
Rarely are judges so admired by the average person, but in the United States she gained notoriety after a filmmaker re-baptized her the “Notorious R.B.G.” after the rapper Notorious B.I.G.

Her life as a defender and promoter of women's rights was highlighted in the biography, “Notorious RBG: The Life and Times of Ruth Bader Ginsburg,” by Irin Carmon and Ms. Knizhnik, which was later the basis for a documentary in 2018.

In later years, Bader Ginsberg suffered through a number of illnesses, including colon cancer and early-stage pancreatic cancer, among other ailments. A Supreme Court judge seat is for life and she repeatedly said that she would not step down until she felt she could not handle the job.

During his presidential campaign in 2016, then-candidate Donald Trump called her “a faker”, although later he said he had not been properly advised.

Legacy
Bader Ginsberg continued to work through her illnesses, as many posted on social media that she was the US's 'last hope' to ensure that the Supreme Court had a liberal presence.

On Friday, just hours after the Supreme Court announced her death, Senate majority leader Mitch McConnell vowed to put Trump's nominee on the highest court in the land.

In 2015, when a new space on the nine-judge Supreme Court opened months before the end of President Barack Obama's second term, Republicans refused to acknowledge Obama's pick. He weighed in on her legacy.

“Ruth Bader Ginsburg fought to the end, through her cancer, with unwavering faith in our democracy and its ideals. That's how we remember her, but she also left instructions for how she wanted her legacy to be honored,” wrote Obama.

“They invented the principle that the Senate shouldn't fill an open seat on the Supreme Court before a new president was sworn in,” wrote Obama in an ode to Bader Ginsberg and her legacy.

“A basic principle of the law — and of everyday fairness — is that we apply rules with consistency, and not based on what's convenient or advantageous in the moment,” he added.

Manasseh Azure writes: What happened to Bridget Otoo at Metr...
23 minutes ago