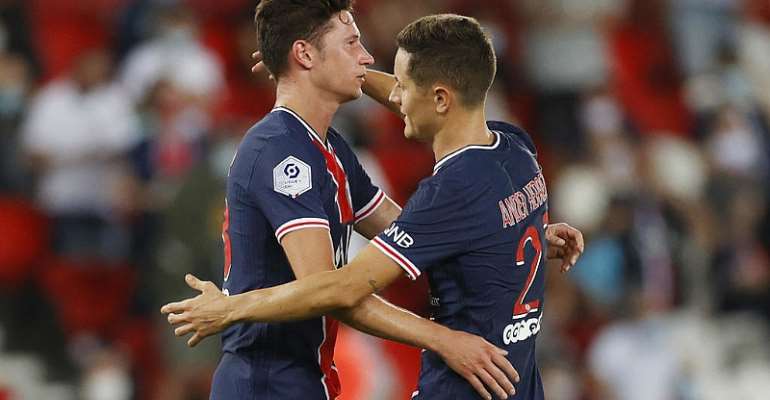 Three days after losing an ill-tempered "le classique" to arch rivals Marseille, Paris Saint-Germain picked up their first points of the 2020/2021 campaign following a last gasp 1-0 win over Metz.

Reduced to 10 men after defender Abdou Diallo picked up a second yellow card, the victory at the Parc des Princes arrived courtesy of a Julian Draxler header in stoppage time.

The Germany international's strike ended a two game losing streak - PSG's worst sequence for the start of a season since 1984/85.

At the end of the 1-0 defeat against Marseille on Sunday night, five players - three from PSG and two from Marseille - were shown a red card

Neymar, who was dismissed after slapping the head of the Marseille defender Alvaro Gonzalez, later accused the Spaniard of racially abusing him during the match.

Claims
Gonzalez alleged that Angel Di Maria - who had just returned to action after testing positive for coronavirus - spat at him during the encounter.

A league disciplinary panel announced punishments on Wednesday night for Neymar as well as the other four players who were sent off during the match.

The 222-million euro Brazilian was banned for two games. Neymar's  teammate, Layvin Kurzawa, was suspended for six matches for lashing out at Marseille's Jordan Amavi who was sidelined for three games for retaliation.

Leandro Paredes and Dario Benedetto received their marching orders for  picking up two yellow cards. PSG's Parades will be out of action for two games while Benedetto will miss one match.

The panel said it would look into Neymar's allegations and study whether there was any menace to Di Maria's behaviour.

The 32-year-old Argentine faces a six match ban if he is judged to have spat at Gonzalez.

Quality players
Even without 400 million euros worth of attacking talent in the shapes of Neymar and Kylian Mbappé, the PSG boss Thomas Tuchel was still able to call on the services of Argentina internationals Di Maria and Mauro Icardi for the match against Metz.

But even though they were surrounded by international midfielders, PSG could not break down Metz despite monopolising possession in the first half.

The hosts' quest for supremacy appeared scuppered in the 65th minute when Diallo bodychecked Ibrahima Niane.

But three minutes into stoppage time, Draxler saved Diallo's blushes when he nodded home from close range to inflict a third consecutive defeat on Metz.

"We had good chances to score," said Metz boss Vincent Hognon. "And we have the players to score. We've had three matches but we have no points and we haven't scored any goals. We need to sort this situation out quickly."