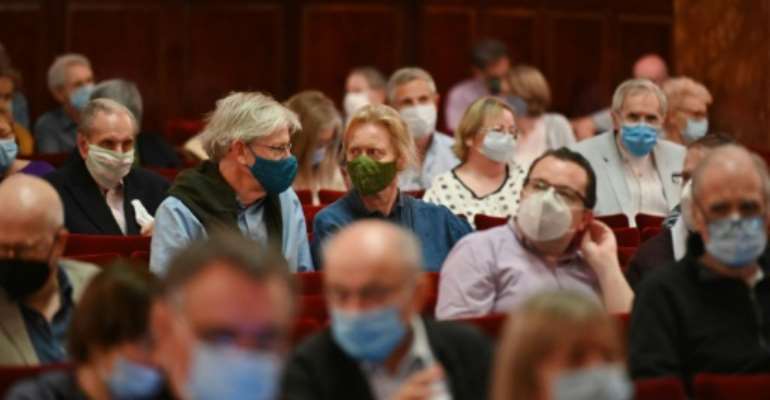 People in England will be limited social gatherings to no more than six people from Monday. By JUSTIN TALLIS (AFP)

Europe will face a rising death toll from the coronavirus during the autumn months, the World Health Organization warned on Monday, as the number of daily infections around the world reached a record high.

Israel was among the countries battling a new spike, announcing a three-week lockdown from Friday under which people will not be allowed more than 500 metres from their homes.

The announcement sparked a wave of anger.

"It's unfair!" said Eti Avishai, a 64-year-old seamstress. "They didn't stop the big gatherings in synagogues, the weddings and the other events, and now I can't be with my children and grandchildren during the holidays?"

New cases of Covid-19 in European countries in the last 7 days. By Robin BJALON (AFP)

"It's going to get tougher. In October, November, we are going to see more mortality," WHO Europe director Hans Kluge told AFP in an interview.

But he stressed that the pandemic was "going to finish, at one moment or another", as WHO Europe's 55 members started a two-day online meeting focusing on their response to the virus.

Millions back to school

The latest surge has sparked alarm across Europe -- a Czech expert warned that his country's health system faces being overwhelmed if the virus continues to spread at its current rate.

Italian children were among the first in Europe to see their schools closed, and some 5.6 million returned for the first time in six months. By Vincenzo PINTO (AFP)

It has also reheated the debate over how best to respond to the rise in infections, with England limiting social gatherings to no more than six people from Monday.

On the other hand, millions of schoolchildren in other affected countries returned to their classrooms for the first time in months.

Italian children were among the first in Europe to see their schools closed, and some 5.6 million returned for the first time in six months on Monday.

Although officials said thousands of extra classrooms had been set up, there were concerns over a lack of surgical masks for teachers and a shortage of single-seat benches.

Some southern Italian regions postponed their reopening, worried that they were not properly prepared.

While Europe battles with rising infections, other parts of the world are tentatively easing restrictions.

Israel was among the countries battling a new spike, announcing a three-week lockdown from Friday under which people will not be allowed more than 500 metres from their homes. By Emmanuel DUNAND (AFP)

In a sign of a growing readiness to reopen, Saudi Arabia said it would partially lift a six-month suspension of international flights this week and South Korea said it would ease rules in and around the capital Seoul after cases declined.

The backlash against the restrictions is also being factored in by beleaguered governments.

Australian police arrested dozens at an anti-lockdown rally in Melbourne on Sunday after crowds defied stay-at-home orders, which came after rallies in Germany and Poland on Saturday attended by anti-vaccine campaigners, conspiracy theorists and far-right activists.

Such rallies are relatively common in the United States, the hardest-hit nation in the world with more than 6.5 million infections and 194,000 deaths.

President Donald Trump, under pressure for his campaigning for the economy to reopen in face of catastrophic figures, was criticised for holding big rallies over the weekend.

"Tonight, President Donald Trump is taking reckless and selfish actions that are putting countless lives in danger here in Nevada," state governor Steve Sisolak, who is from the rival Democratic Party, tweeted ahead of the Sunday rally.

Trump, who used the rally to boast about his success dealing with the pandemic, called Sisolak a "political hack" and urged the crowd to "tell your governor to open your state".

There was some good news in Britain, where regulators allowed clinical trials to resume on one of the most advanced experimental vaccines.

Researchers on the joint AstraZeneca-Oxford University project, who hope to finish tests by the end of the year, had "voluntarily paused" the trial after a UK volunteer developed an unexplained illness.

A vaccine is considered crucial to the fight against the virus, but the WHO's Kluge said the public should not put all their hopes on a single drug.

Meanwhile, the wider effects of the pandemic are biting hard on medical staff and strained health systems.

"I gave birth a fortnight ago, and once you're in hospital you realise that the nurses, the carers... they don't have the means," said Severine at a rally in Brussels on Sunday for better health funding.

"They're always being asked for more, always too much, they're exhausted."