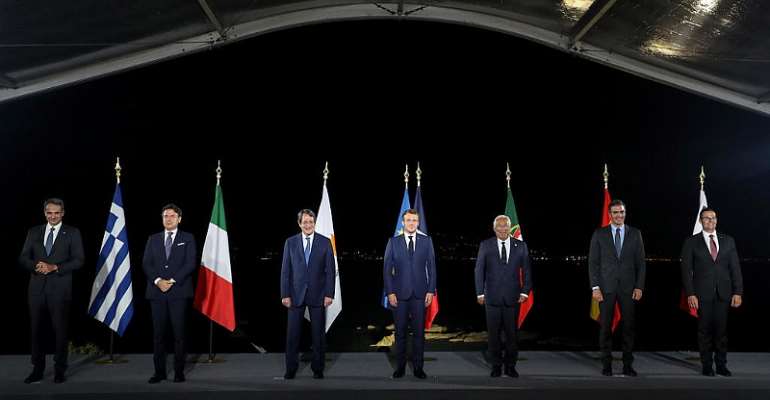 French President Emmanuel Macron has urged European leaders to adopt a tough response to Turkey over its drilling plans in the Eastern Mediterranean. Despite a show of unity, consensus may be far off.

An emergency summit in Corsica by leaders of seven European countries has wrapped up with a new warning to Turkey to end its "unilateral and illegal activities" in Mediterranean waters.

Called for by France, the MED7 summit was aimed at adopting a "united and clear voice" on Europe's policy towards Ankara, ahead of a full EU summit later this month.

Macron and the leaders of Italy, Malta, Portugal, Spain, Greece and Cyprus agreed to back EU sanctions against the government of President Recep Tayyip Erdogan unless it fails to end its "confrontational actions".

But not all countries at the Corsica summit had Turkey on top of their minds.

"There are core differences," says Emmanuel Dupuy, president of the Institute of European Perspective and Security Studies (IPSE) in Paris.

Despite the "polite show of unity" at the press conference following the talks, Dupuy noted that each leader had a different view when they took the floor.

"Portuguese Prime Minister Antonio Costa, Spain's Pedro Sanchez and Italy's Giuseppe Conte all said it was just as important to tackle migration or EU cooperation towards the southern part of the Mediterranean as it was the Turkish issue," he told RFI.

Indeed, Italy, Spain and Malta are more concerned about migrant boats arriving from North Africa to their shores. While Portugal has little stake in the tensions around the eastern Mediterranean.

Tensions have ratcheted up a notch ever since Turkey announced plans for energy exploration near a Greek island – an area Ankara says is on its continental shelf, but which Greece also claims.

Last month, France sent warships to the region that is already teeming with naval activity in a show of support for Greece and Cyprus. That triggered the ire of Ankara and a war of words between the two Nato allies.

Paris said ahead of Thursday's summit that Ankara was "no longer a reliable partner" in light of its conduct in the Mediterranean and in Libya – another area of tension between them. Turkey responded that Macron should quit trying "to give lessons by speaking pedantically with his old colonial reflexes".

Turkey has repeatedly lashed out at France for extending its long history of colonialism, notably in Africa. On Thursday, even as EU powers gathered to mull sanctions on Ankara, Turkish Foreign Minister Mevlüt Çavuşoğlu wrapped up an African tour in Senegal.

"The Turkish Foreign Minister was in Guinea-Bissau, Mali, and last month in Benin, Niger and Chad," comments Dupuy. "It is symbolic because Turkey is opening up new fronts to challenge France's position in its former territories."

Despite their rhetorical broadsides, Dupuy doubts it will lead to conflict. "Harsh words are better than a military option – which is not on the table."

The fiery language however is unlikely to facilitate mediation efforts being led by Germany, which currently holds the EU's rotating presidency.

"Macron is playing the bad cop" in facing down Turkey. "Germany is letting it so it can play the role of good cop," says Dupuy.

He reckons Germany's position has been strengthened following the Corsica summit, while France leaves isolated.

"France has shown a robust solidarity for Greece which is absolutely not the case for other European partners. It was very clear in the words of Conte, Sanchez and Costa that we need Turkey. We cannot have cooperation with all of the Mediterranean countries without Turkey.

"Their message to France is: we can back you but only to a certain point," he said.