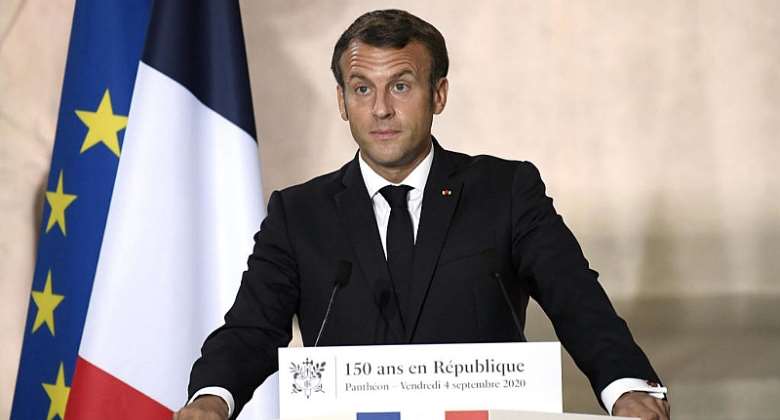 In a speech to mark 150 years of the French Republic, President Emmanuel Macron has emphasised the need to protect the country, which he qualified as "fragile". He stressed that no form of separatism should be allowed divide the nation, while giving a nod to contributions made by immigrants over the years.

Macron criticised those who seek French citizenship without accepting France's “right to commit blasphemy", in reference to the 2015 terrorist massacre at satirical weekly Charlie Hebdo, the trial for which opened on Wednesday.

Prior to his address at the Pantheon mausoleum in Paris, a young woman read out the proclamation of the Third Republic from 4 September, 1870, originally been presented by the son of an Italian immigrant, Leon Gambetta.

The Third Republic refers to the system of government adopted when the Second French Empire collapsed after the defeat of Napoleon the Third in the Franco-Prussian war.

Macron cited the names of eleven people who symbolise the values of the French Republic, not necessarily French by birth, insisting that being French was about upholding the country's values.

He also referred directly to five newly naturalised French citizens present in the audience, from Britain, Algeria, Cameroon, Peru and Lebanon, and hailed the contributions immigrants have made to France over the years.

"You have become French citizens. Now it's up to you, along with all the other children of the Republic, to go beyond the diversity of your origins, to take on the mantle of a French citizen and strive to go beyond yourselves," Macron wrote on Twitter.

Those who seek French citizenship must accept all of the Republic's freedoms, including “the freedom to believe or not to believe".

“You don't choose one part of France. You choose France," he said,

"The Republic will never allow for any separatist ventures.”

The themes of security and justice marked his speech, as Macron insisted that the rules of the Republic are stronger than individual laws.

"That's why there will never be any place in France for those who try to impose their own law – often in the name of a God, sometimes with the help of foreign powers."

A bill to counter separatism will be presented in the coming weeks, he said, referring to his earlier announcements made in the town of Mulhouse in February, which included a stricter control of the financing of mosques and the end to foreign imams.

For Emmanuel Macron, "to be French is to always support those who fight for freedom, especially in the face of rising censorship."

The Charlie Hebdo terrorist trial has brought the sensitive subject of free speech versus hate speech back into the spotlight. Fourteen alleged accomplices to the deadly attacks on the newspaper and also a Jewish supermarket are facing trial.

This week, the satirical magazine republished the caricatures of the Prophet Mohammad that initially sparked the ire of Islamists when they were published in a Danish newspaper in 2005.

"As the trial of the January 2015 attacks opens, I say that to be French is to defend the right to laugh, jest, mock and caricature. Voltaire said these rights are the foundation of all other rights," Macron said.

There was also no room for violence against the security forces, those who safeguard Republican values, who have in recent months been the object of attacks.

"Police, gendarmes, judges, mayors – all those who combat violence, racism and anti-Semitism play a key role in society, and therefore, those who attack them should be harshly punished," he said.

Equal opportunity for all

The speech was an opportunity for the French leader to put forward key ideas ahead of a government summit on 9 September, marking the return to work after the summer break.

On the agenda, the question of equal opportunity, for which Macron admitted France had not done enough.

"Each citizen, regardless of where they live, or their background, must be able to build a life for themselves by their work, by earning it. We are too far from this ideal at present."

There was some sharp criticism from government ministers, both left and right, who felt Macron was too apologetic and lacked pride.

"It's all very well and good to make grand speeches, but we need to see action in everyday life," said Stéphane Troussel, president of the Seine-Saint-Denis department and national secretary of the socialist party.

"I don't see any sign of concrete announcements in this speech," he lamented, commenting that a year ago, the then prime minister Edouard Philippe made a speech saying there would be extra help for the Seine-Saint-Denis area, but Troussel is still waiting to see the results.

The leader of the far-left France Unbowed Party, Jean-Luc Mélenchon (FI), went as far as to say that he preferred to wait until the 21 September, in reference to the creation of the first Republic in 1792, "the true anniversary of the foundation of France," he said.

"No, monsieur le president, the French Republic is not what you say it is," he said, adding he would formally respond to the president with his own speech later in the day.