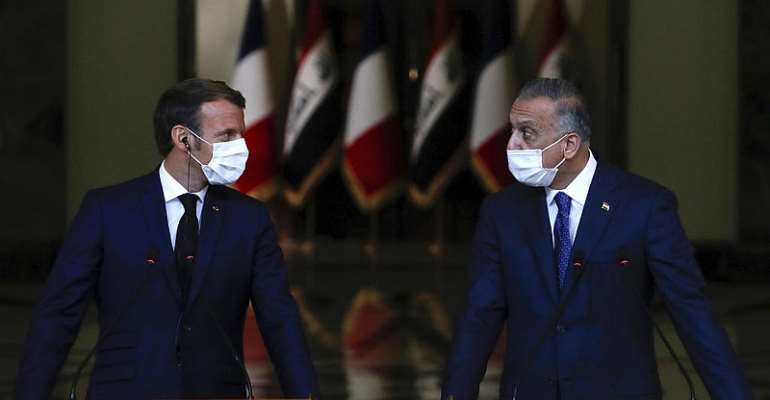 French President Emmanuel Macron has pledged support for a sovereign Iraq free of inference from foreign actors and Islamic State militants. It was Macron's first official visit to Baghdad since Prime Minister Mustafa al-Kadhimi formed a new government in May.

"We are here for and will continue to support Iraq," Macron said at a news conference in Baghdad Wednesday alongside his Iraqi counterpart Barham Salih.

"Any foreign intervention may undermine the efforts exerted by you as a government."

Macron had earlier said he was heading to Baghdad "to launch an initiative alongside the United Nations to support a process of sovereignty".

The visit of the French president was the first by a Western leader to Iraq since Prime Minister Mustafa al-Kadhimi took office in May.

Kadhimi took over following a chaotic 10-week period marked by unrest in a country exhausted by war with Islamist militants, corruption and economic decay. He has been tasked with organising an early election for June 2021.

Terror threat
Iraqi officials should continue to share the vision of restoring "Iraq's sovereignty," Macron insisted, while admitting that foreign interference and the threat of Islamic State posed major challenges.

"The war against Islamic State isn't finished...we will continue to act alongside you in the framework of the anti-Islamic State coalition," Macron said.

The armed terror group, which once occupied a third of Iraq's territory, has been largely defeated there but continues to carry out ambushes, assassinations and bombings.

Paris is worried that Islamic State militants could exploit Iraq's political uncertainty and the clashing regional interests of its two major allies, the United States and Iran, to regain a foothold.

Delicate balance
"The second challenge is...the multiple foreign interferences that have been going on for several years," Macron noted.

Baghdad's delicate balancing act between Iran and the United States has become increasingly tortured since Washington's withdrawal in 2018 from a multilateral nuclear deal with Tehran. France is among European nations that remain key backers of the 2015 agreement.

Macron shared some of these concerns with Prime Minister al-Kadhimi whom he met later on Wednesday during his day-long trip.

"We do not want to be an arena for confrontations but a zone of stability and moderation," al-Kadhimi said at their joint news conference, adding that France and Iraq would sign energy agreements in the future and deepen military cooperation.

Not giving up
"We talked about a future project, using nuclear energy to produce electricity and peaceful projects, which will be under the supervision of the International Atomic Energy Agency, which will create jobs and address electricity shortages," he said.

Speaking ahead of his visit on Friday, he stressed the importance for the Iraqi people "not give in to the fate of domination by regional powers and by Islamist terrorism".

"There are leaders and a people who are aware of this and who want to take their destiny in hand. France's role is to help them do so," he said.

"It was fantastic experience to serve under President Nana-A...
54 minutes ago