Fears grow in Sicily over migrants infected with Covid-19 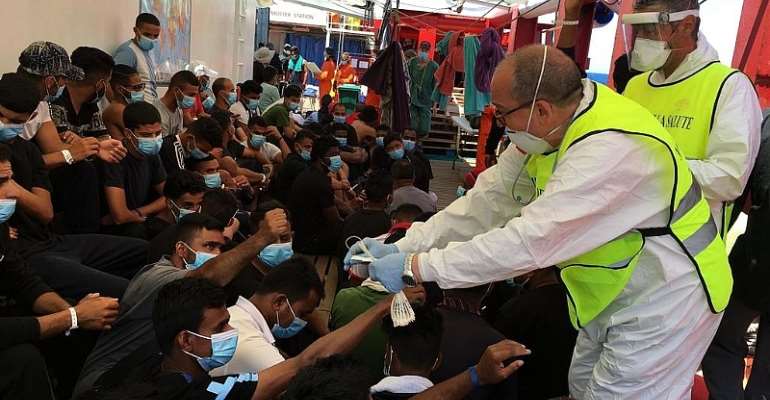 The governor of Sicily, Nello Musumeci, has issued an order that all migrants be transferred from reception centres on the Italian island to shelters on the mainland. He says the migrants are a health hazard and that it is no longer possible to guarantee the health conditions necessary to prevent the spread of Covid-19.

Musumeci said there is a health emergency underway that needs urgent attention because people are living in conditions which the governor described as similar to “concentration camps”.

More than 7,000 migrants arrived on the island in the month of July alone; by mid-August a further 3,000 had landed on Sicilian shores. Last year in the months of July and August combined, migrant arrivals were fewer than 2,500.

Musumeci's order also effectively closes ports on the island to the arrival of migrant vessels of all kinds, including rescue ships operated by charities.

The Italian Interior Ministry reacted by saying the ordinance issued by the governor of Sicily has no value because migration is an issue under the responsibility of the central government in Rome.

Musumeci justified his action, alleging that neither the Italian government nor Europe has done anything about the increasing number of migrants arriving on the island. Sicily, he said, cannot allow “this invasion” to continue.

Musumeci complained that “every day Sicilians are called to make sacrifices to contain new Covid-19 infections and asked to wear masks, ensure social distancing and adopt all other measures of caution and prevention".

"And then the state amasses migrants in halls that become areas of outbreaks,” he added.

Musumeci said the situation at the reception centre on the tiny southern island of Lampedusa is out of control. He said that for the past two months he has been calling on the central government, which is responsible for migrant policies, to declare a state of emergency on Lampedusa.

He claims the government has not even responded to his request. The migrant centre on Lampedusa is currently holding more than one thousand migrants, many more than its true capacity.

There have been calls for the governor of Sicily to resign if he is unable to manage his territory. Other politicians insist that Musumeci is doing the right thing given the circumstances. Many blame the migrants' presence for a rise in the number of infections.

Italian infection rate on the rise

The number of cases reported in Italy has recently risen dramatically from a plateau of around 200 infections every day. For the past two days, new infections have exceeded 1,000 per day.

Health officials say the increase is mainly due to Italians who have vacationed abroad and contracted the virus, rather than to migrants.

Italy was the first European country to experience a serious outbreak of coronavirus this winter, with more than 35,000 deaths.

Authorities fear that the second wave may be starting already and say efforts need to be stepped up before the start of the school year on 14 September.