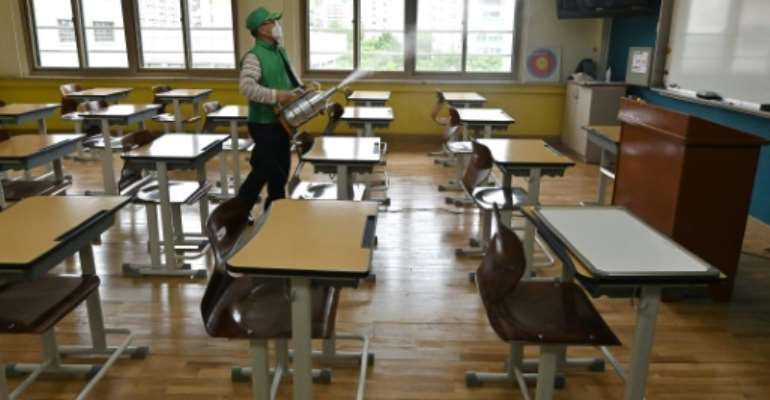 A worker sprays disinfectant in a classroom at a high school in Seoul. By Jung Yeon-je (AFP)

Millions of South Korean students were ordered back to online classes Tuesday and Mexico launched a nationwide televised schooling programme, highlighting the deepening crisis for children as the coronavirus pandemic drags into a ninth month.

The school closures were part of new measures in many parts of the to halt the disease that has killed more than 813,000 people and infected over 23 million, according to an AFP tally.

Jamaica's Usain Bolt, shown here during the Rio Olympic Games in 2016, says he is quarantining after a COVID-19 test - but did not say if he had received any results. By Yasuyoshi Chiba (AFP/File)

The latest high-profile case was sprint legend Usain Bolt, who was in quarantine Monday after undergoing a test for the virus that Jamaican media reported had come back positive.

The retired 100 and 200 metres world-record holder said on Twitter that he was "trying to be responsible" by going into isolation, but he did not confirm the result.

He is one of a growing number of sports personalities to have fallen victim as the virus touches all corners of society.

An Emirati man wearing a face mask against COVID-19 stands at the Sharjah Art Museum on August 24, 2020 in the United Arab Emirates. By Karim SAHIB (AFP)

In the education sector, the United Nations estimates at least 60 percent of the global student population has been impacted by school closures across more than 140 countries.

All schools and kindergartens in the greater Seoul region were told on Tuesday to return to online learning as authorities battled multiple coronavirus clusters.

Another 280 infections were reported on Tuesday, taking South Korea's total to almost 18,000.

"The alarming emergence of mass infections since August is turning up as infections of our students and staff members," Education Minister Yoo Eun-hae told reporters.

In Mexico, around 30 million children began a new school year on Monday with lessons via television in a nationwide experiment in distance learning.

People queue at a bakery in Gaza City after new lockdowns were announced across the city due to cases of the novel coronavirus late on August 24, 2020. By MAHMUD HAMS (AFP)

The government has teamed up with four private television stations to broadcast classes across the Latin American country, which has recorded more than 60,000 deaths from the virus.

Face-to-face lessons have already been suspended since March. The government said it chose TV because it reached 94 percent of the country, compared with between 70 and 80 percent for the internet.

"I'm worried about how good the (lessons) can be through television," said one father, Alfredo Urdiain, whose 11-year-old son Emiliano is taking part.

The social isolation many children are experiencing has also prompted mental health concerns.

A man rests in a park after the government eased lockdown measures after five months of quarantine in San Salvador on August 24, 2020. By MARVIN RECINOS (AFP)

Anxiety about the pandemic was fuelled Tuesday by an announcement from researchers in Hong Kong that they had identified what they said was the first confirmed case of COVID-19 reinfection, raising questions about the durability of immunity.

The patient, a 33-year-old man living in Hong Kong, tested positive in March but after two negative tests was found to be positive again in August.

Microbiologist Kelvin Kai-Wang To, lead author of the study, told AFP: "COVID-19 patients should not assume after they recover that they won't get infected again."

However experts were uncertain about the significance of the announcement, with some researchers saying the case could be extremely rare.

Months of lockdowns to stem the spread of the virus have taken a huge toll on the global economy, with millions losing their jobs and business shutting their doors.

Airlines have been clobbered by a collapse in tourism as nations keep their borders closed.

On Tuesday the Indonesian holiday island of Bali said foreign tourists would not be allowed to visit for the rest of 2020, scrapping a previous plan to open up from next month.

But the pandemic has not spelled disaster for all holidaymakers.

One pair of Japanese honeymooners stranded in Cape Verde by the pandemic have been named unlikely ambassadors for the tropical paradise's Olympic team at next year's Tokyo Games.

Rikiya and Ayumi Kataoka found themselves marooned in Cape Verde when the country's airport shut down.

They have since struck a partnership with authorities to make videos promoting the country.

"I don't think I will be so lucky to be given these great jobs again," Rikiya said.

"We need the hand of God like never before against economy d...
3 minutes ago