The Current World Order: Deteriorating Or Not? 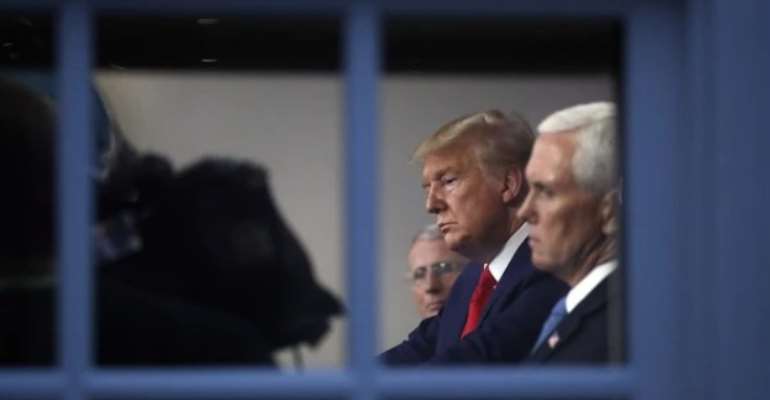 President Donald Trump and Vice President Mike Pence listen to a briefing about the coronavirus at the White House in Washington, March 31, 2020 (AP photo by Alex Brandon).

The world in the year 1914 to 1918 was in shambles which resulted in the first world war. In the years that followed, it did not get any better, as the world turned chaotic in 1939 to 1945, then the United States of America rose to global power and helped restore peace. Since then, the world has been, I would not be quick to say all peaceful as an ideological battle nearly resulted in another chaos. The world got better with the establishment of international organizations, signing of peaceful treaties and the fight against nuclear disarmament, among other measures to ensure peace.

Studies and documentaries have shown some lingering fear in recent events and diplomatic relations that exist among countries. The questions that rise are, What mars diplomatic relations when relations make the world a better place than isolationism? Is it the rise of particular leaders or the advent of extreme ideological perspective?

Recently, the relationship between USA and China is very muddy, the relationship between Canada and China is not good, that of Russia and USA is just not improving to anything better, not to talk about Syria and USA, Saudi Arabia and USA against Iran just to say the least. What strikes me most is the UK leaving the EU which has been tagged “Brexit.”. Considering the break in diplomacy between these countries and the divided world agenda affecting the international organizations, is it a sign of global power reshuffling? Or the global order is deteriorating? Or perhaps is it being strengthened from a reshuffling to set the world on a different agenda?

Diplomacy in recent times has been favoured and employed less than mercantilist- retaliatory actions. Hence, countries look more in-ward and this has redirected and refocused foreign policy.

On the positive side, the foreign policy of North Korea seems somewhat changing as diplomacy remains a better option than other alternatives as Patrick M. Cronin argues in his work, “Diplomacy is working- for now”. The leader, Kim Jung Un, and the nation of North Korea seems to be tolerant rather than liberal in recent times than ever before as history was set in 2018 when President Donald Trump, US President, met Kim, the North Korean President for the first time. Moreover, further talks are underway, even though critics still say it will be difficult for a profitable outcome because of the individual interest of the two Presidents.

To assess the state of the world, one needs to understand what the world order entails. The world converges on different fronts. It could be economic, social, political and most recently and prominently due to severe climatic changes, the world converges on environmental fronts. World Order as captured in the Encyclopedia Princetoniensis authored by Richard Falk will be a better definition in the context of this paper. Falk argues that world order can be used sometimes analytically and prescriptively. However, the prescriptive use is strikingly important for the purpose of this paper. World Order in its prescriptive definition is the ‘preferred arrangement of power and authority that is associated with the realization of such values peace, economic growth and equity, human rights and environmental quality and sustainability’. Therefore, the world sets up principles as they converge in all fronts such economic, social, political and even culturally. Certain mechanisms are put in place to accompany the transactions between the countries of the world. And these mechanisms adjust relations as countries compete for the limited resources, for markets, among others as argued by Walter S. Jones in his book, “the Logic of international relations”. It is also important to note that, the political relation is vital as it influences the other relations such as the economic, social, and environmental relations between countries. Thus, with the existence of a strong political relations, the others will, all things equal, inadvertently fall in line. But can a true political relation truly be realized, when countries have different ideologies and diverse calibre of leaders? Before I try to find answers to these questions, I will assess one of the more recent deteriorating relations between countries and the retaliatory policies taken by countries contributing to the depleting of diplomacy. I will do this by focusing on the Sino-US relations because these are the two largest economies in the world.

Did rivalry and intensifying diplomatic relations between US and China start recently? Since 1949, after the divide between Mainland China and Taiwan, US- China relations have not been smooth. However, there have been silver linings in between since 1949 to 2018. In recent times, things have gotten rougher as the Washington accuses Beijing of technological intellectual theft among other things. This has culminated into a trade war where US places tariffs on goods from China. China has also engaged in a retaliatory measure on a range of US goods. Now, these countries are arguably the two largest economies in the world today, thus, their relations and good interactions can help improve the world. So why this disagreements? Does this come as a result of leadership? Or a foreign policy of China to be a global power in which Washington has realized and wants to prevent? As a matter of fact, US and China have supported different agenda and have since thrown their support for different regimes in other countries. According to BBC news dated October 30, 2015, “The US supports Syria’s main opposition alliance, the National Coalition, and provides limited military assistance to “moderate” rebels” while on November 29, 2017, TheNewArab reported that China wants to deploy troops to support Bashar al-Assad forces. Moreover, US supports Juan Guaido, the head of Venezuela’s National Assembly, who declared himself Venezuela’s interim president. On the hand China supports Nicolas Maduro the sitting and elected (even though, the elections is challenged) president of Venezuela. These and a host of other growing international rivalry exist between these two countries. China and US relations are important to the world. This is simply because; US and China have the largest economies. Thus, their disagreement on issues may have ripple effects on other countries.

Are relations between countries important?

The world has reached a point where, happenings at one place inevitably extends to another place whether within the same region or outside the region. For example, a war in one country inevitably forces people to flee into another country increasing the problem of refugees and dealing with population-related issues. This places pressure on governments to deal with immigration issues and increasing population. Again, an issue such as climatic change cannot be solved by an individual country. Logically, the world needs to pact to address various issues whiles respecting each other’s sovereignty. Per the structural realist argument, countries compete among themselves for power and this is due to the anarchic system of the world, paranoia of some states, the desire of states to survive, among others (Mearsheimer, 2016). As a result can order be a certainty in a diverse world?

There can be a bipolar world for which two great countries exist but there is a long standing realist debate whether such a system is more or less war-prone than other systems such as multipolarity or a unipolar world. In the meantime, two captains cannot run a ship. The cold war evidently affirms this opinion. There cannot be two world powers except if they agree on almost everything which is near impossible. It is impossible more so when these countries have different ideologies or they project distinctively different view points about the trajectory the world should follow. There will always be disagreements and a divided world. A global power is evidently necessary and there can only be one at a time. This is consistent with Gilpin’s hegemonic stability theory. However, the global power acting as a leader should respect individual countries, accord them their highly earned sovereignty and offer supports when needed. What happens when the hegemonic power is arbitrary? Multipolarity will be sufficient but this however will thrive on balance of power to ensure no state becomes too powerful to enforce its rule or power over others. The fulcrum of balance power rest on two major ideas; building up equal nuclear arms and joining forces with other states to be a strong force. Both ideas can be destructive though the former idea may ensure mutual assured deterrence but can still be deadly due to the presence of nuclear weapons and the later may encourage more division in the world but at the bright side there is a glimpse of coalesce which can at the long run ensure world unity. Notwithstanding, multipolarity is the best among all the evils because recent events have shown unipolarity will not inure to the benefit of the world because every state will be at the mercy of the one superpower state who might dictate its will irrespective of the domestic and geographic considerations. As for bipolarity it should be relegated and cast into the deepest part of “hell”.