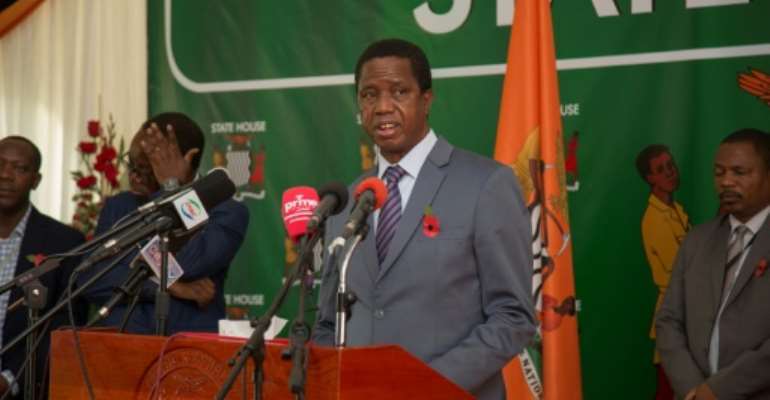 Zambian President Edgar Lungu (pictured during a November 2019 press briefing) made the appeal in a telephone call with his Chinese counterpart Xi Jinping. By SALIM DAWOOD (AFP/File)

Zambia's President Edgar Lungu has requested debt relief and cancellation from China due to the economic impact of the coronavirus pandemic, his office said.

Lungu made the appeal in a telephone call with his Chinese counterpart Xi Jinping on Monday.

"President Lungu called for debt relief and cancellation in light of reduced revenue due to the negative impact of the pandemic, as well as competing needs for the country, to secure adequate resources to fight the pandemic and to stimulate the economy," the presidency said in a statement released late Monday.

"Chinese project finance loans to Zambia amount to between US$6 billion and US$9 billion, based on unofficial sources," said Robert Besseling, director of risk assessment firm EXX Africa.

"However not all the funds have been disbursed, while the Zambian government itself has been unable to account for its obligations to China. An official audit has been withheld for several years," he said.

Zambia's external debt is projected to soar above 60 percent of GDP this year.

The International Monetary Fund (IMF) last week predicted that Zambia's economy will contract by five percent in 2020, compared to growth of 1.5 percent posted last year, due to the coronavirus pandemic and severe drought.

To date the country has recorded 3,326 coronavirus cases, including 120 deaths.

The landlocked southern African country has defaulted on repayments of loans acquired for several construction projects, including Chinese funded ones, resulting in some being suspended or abandoned.

A US$2 billion hydro power station bankrolled by the government and foreign financial institutions was supposed to go on stream this year after construction started in 2015, but went on hold after failure to acquire additional funding, according to Besseling.

EXX Africa expects Zambia's debt rating to "deteriorate significantly in 2020" and says it will remain "one of Africa's worst country risk performers in the year ahead".

"Zambia's sovereign has been unable to maintain payments on various loan agreements and contractor commitments over the course of 2019," said Besseling.

Mining revenue dropped nearly a third between February and April this year due to the coronavirus pandemic, according to the country's mining chamber.

Nearly half of the country's tax revenues goes towards debt servicing.