Markets, Lorry Parks, Public Places In Greater Kumasi Go Through Another Round Of Disinfection 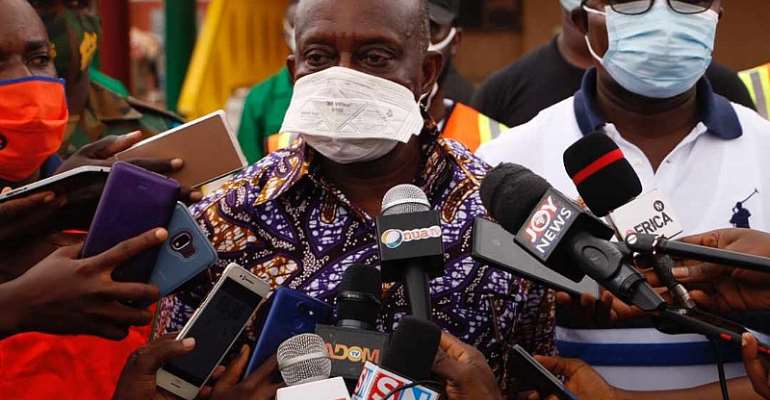 Following the Nationwide launch of the 2nd phase of National disinfection exercise in Accra on Sunday, about 46 sub-metros and districts in greater Kumasi in the Ashanti region are set to undertake its turn of phase two of the disinfection exercise and general cleaning of markets, lorry parks, and public places.

Speaking at the regional launch, Hon. Simon Osei Mensah, the Ashanti Regional Minister said the exercise formed part of the government's effort to contain the spread of the coronavirus in the country.

"The cleanup and disinfection exercise of markets and public places is one of the major measures to limit the speed of the spread of the virus in the country".

He noted that the exercise was being done to tidy the markets and keep them clean for consumers and traders.

According to him, the chemical used for the exercise was not harmful, allaying the fears of especially the market women many of whom think it might have an adverse effect on their commodities.

In the Manhyia South District, the Zoomlion disinfection crew disinfected and fumigated scores of markets. These were the Alaba market, Adeshieman market, and lorry stations.

He appealed to the traders in various markets to co-operate with the authorities to make the exercise effective.

"I will urge the traders to close their shops for some hours and allow the officials to work and open them after completion of spraying," he said.

He commended the media and the security personnel for being the key players in the fight against COVID-19.

He explained that though the chemical being used was potent in dealing with the virus and other bacteria, it only works for a period of time.

"That is why the government had resolved to at least disinfect and fumigate public places on a quarterly basis," he said.

Hon. Osei Assibey, Mayor of Kumasi Metropolitan Assembly, also thanked the Ministry of Local Government, Ministry of Sanitation and Water Resources, and Zoomlion Ghana for the collaboration in undertaking the COVID-19 disinfection exercise.

He also advised the public to adhere to government protocols towards the fight against the pandemic.